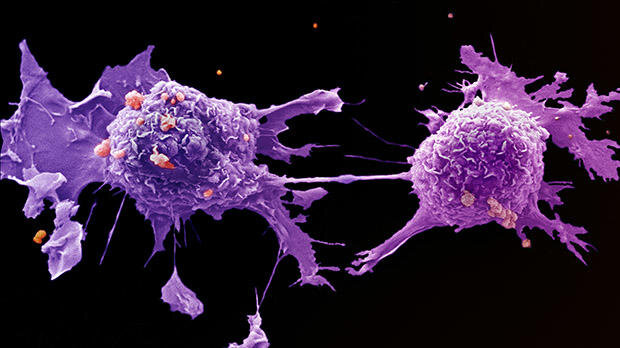 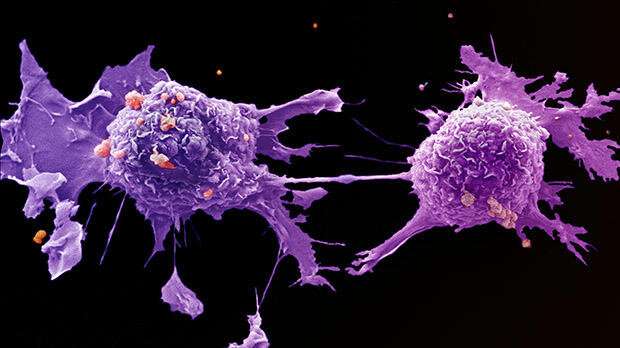 Cancer treatments can work in lots of different ways, aiming to kill tumor cells or keep them under control. Ideally they cause tumors to shrink, but drugs can also be considered successful if they stop tumors growing.

But unfortunately, the effects don’t always last forever. Sometimes a drug can have an initial effect on a cancer’s size or growth, but then the tumor starts to grow again despite treatment. This is what’s known as drug resistance.

“No matter what amazing new treatments we come up with, eventually at least some patients’ tumors will become resistant to them, that is the reality,” says Dr. Georgina Sava, a research associate working on drug resistance in breast cancer in Professor Simak Ali’s lab at Imperial College London.

Sava tries to predict ways that resistance may develop to new drugs, aiming to stay one step ahead of the cancer. She says drug resistance is a big problem in cancer and there are lots of people working to understand how and why it happens.

Resistance comes about because of faults in the DNA of cancer cells. We’ve blogged before about how cells first become cancerous. And it turns out the same processes can help a cancer evolve and adapt to treatments.

Some of the changes that arise can mean cells stop responding to cancer drugs like chemotherapy, targeted cancer drugs or hormone therapy.

Cancer cells develop from normal cells because of a build up of mistakes in key parts of our DNA. But it doesn’t stop there. Even when a cell has become cancerous, DNA faults continue to appear. Some of these faults can make the cells resistant to a treatment.

Individual cells in a tumor can have different DNA faults and, as a result, not every cancer cell in a tumor is exactly the same. This is where problems arise.

“When cancer cells are treated with a drug, it’s like survival of the fittest,” says Sava. “in an ideal situation, every cell in a tumor would be killed. But, if even a single cell happens to be resistant to the drug, it will survive and eventually grow to become a new tumor.”

This is problematic because it can be hard to detect any lingering resistant cells, particularly if there are very few of them.

“Once a resistant tumor has developed in this way, the drug that was once able to shrink the tumor, will no longer work,” Sava adds.

How do drugs stop working?

There are lots of ways that cancer cells can become resistant to a drug.

Sava highlighted the problem of resistance to hormone therapies, which are used to treat some breast cancers that are driven by the hormone estrogen.

estrogen can interact with estrogen receptors on the surface of breast cancer cells, signaling them to grow. Hormone therapies work by either blocking this interaction, or by lowering the levels of estrogen in the body.

But cancer cells can become resistant to these therapies if they develop a specific fault in the estrogen receptor, which means it no longer needs estrogen to signal breast cancer cells to divide.

When this happens, hormone therapies will no longer work.

The same is true for other drugs, like chemotherapy. Cancer cells can develop a number of different faults that help them avoid the effects of chemotherapy. This includes DNA changes that:

Scientists like Sava are working hard to overcome drug resistance.

“One of the main ways that we can try to overcome drug resistance is by using combination treatments.” By hitting the cancer in multiple ways at the same time using different drugs, Sava says cancer cells have less options to escape.

But it would also be helpful to be able to predict how a treatment might stop working, which is exactly what Sava is aiming to do in breast cancer.

Sava takes breast cancer cells and exposes them to a drug for long periods of time, to mimic a patient taking a drug.

“The cells initially stop growing and die. But after months of treatment, they start growing again and we can see that they’ve become resistant to the drug. We can then compare these resistant cells to the original ones that were sensitive to the drug and work out how they’ve adapted to become resistant.”

In Sava’s case, she found that the resistant cells had started to produce abnormally high levels of a cellular pump, called p-glycoprotein, which protects cells by preventing drugs from getting in.

Researchers have been looking at drug resistance for almost as long as they have used cancer drugs. To make cancer drug treatments more effective, scientists like Sava need to find a way of overcoming resistance.