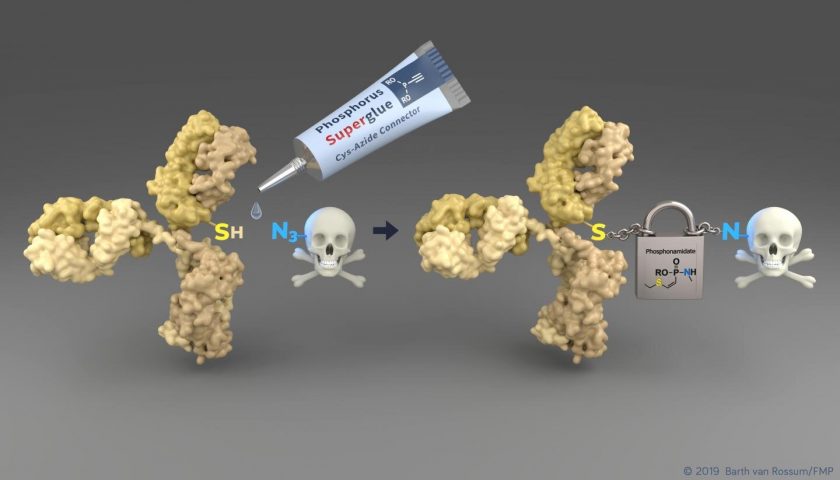 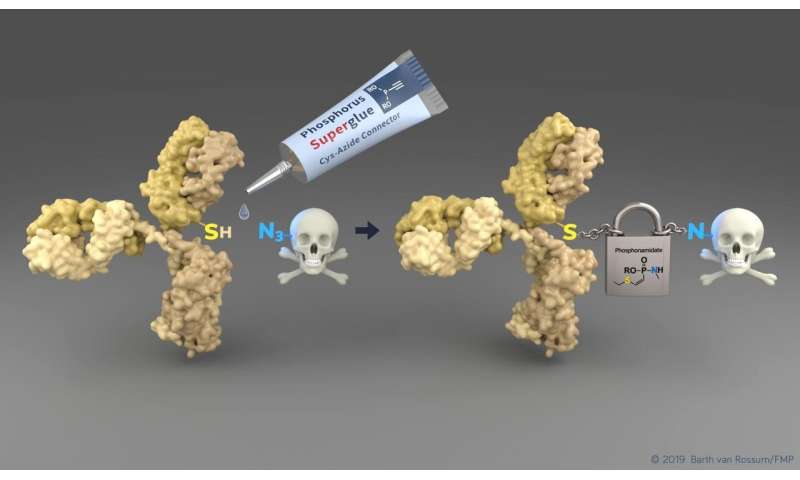 Treating cancer more selectively and more effectively—this could be achieved with an innovative technology developed by teams of researchers at the Leibniz-Forschungsinstitut für Molekulare Pharmakologie (FMP) and the Ludwig-Maximilians-Universität München (LMU). The process transforms proteins and antibodies into stable, highly functional drug transporters, with which tumor cells can be detected and killed.

Classic chemotherapy for the treatment of cancer is based on toxic substances that are particularly effective for rapidly dividing cells. However, since healthy tissue also depends on cell division, treatment with chemotherapeutic substances is often accompanied by severe side effects. A dose sufficient to completely remove the tumor, would in many cases be too toxic to administer to a diseased person. With more modern approaches, it is now possible to transport active agents (drugs) in the body selectively to the site of action, for example by linking a drug with an antibody that can differentiate cancer cells from healthy tissue through changes on the surface of the cell. Five such Antibody Drug Conjugates (ADCs) are already on the market.

However, these ADCs lose a large part of their “toxic cargo” en route to the cancer cell. The substances (drugs) are released into the bloodstream and dangerous side effects can occur. A stable link between drug and antibody would therefore be highly desirable. This is precisely what the researchers—a team led by Professor Christian Hackenberger from the FMP and Professor Heinrich Leonhardt from the LMU Biocenter—focused on. Their results have been published in the prestigious journal Angewandte Chemie: In two consecutive articles, the development of methods and the application of these methods to selective drug transport are presented.

“We have developed an innovative technology that makes it possible to link native proteins and antibodies to complex molecules, such as fluorescent dyes or drugs more easily and with better stability than ever before,” reports Marc-André Kasper, a researcher in Christian Hackenberger’s group. The researchers discovered the outstanding properties of unsaturated phosphorus (V) compounds and took advantage of those. These phosphonamidates connect a desired modification—for example, a cancer-fighting agent—exclusively to the amino acid cysteine, in a protein or antibody. Since cysteine is a very rare natural occurring amino acid, the number of modifications per protein can be controlled quite effectively, which is essential for the construction of drug conjugates. In addition, phosphonamidates can easily be incorporated into complex chemical compounds. “The greatest achievement of the new method, however, is that the resulting bond is also stable during blood circulation,” says Marc-André Kasper. The ADCs that are on the market cannot achieve this.

To test the applicability on targeted drug delivery, the researchers compared their technology directly with the FDA-approved ADC, Adcetris. The medication was re-created as precisely as possible with the same antibody and active agent, the only difference was that the innovative phosphonamidate linkage was used. When applied to blood serum, the researchers observed that their modified ADC lost significantly less active ingredient over a period of days. They also used the new technology in experiments with mice to combat Hodgkin’s lymphoma. The preparation proved to be more effective than the conventional medication. “From our results, we conclude that phosphonamidate-linked drug transporters can be administered in lower doses, and that side effects can be further reduced. Thus the technology has great potential to replace current methods in order to develop more effective and safer ADCs in the future,” says FMP group leader Christian Hackenberger.