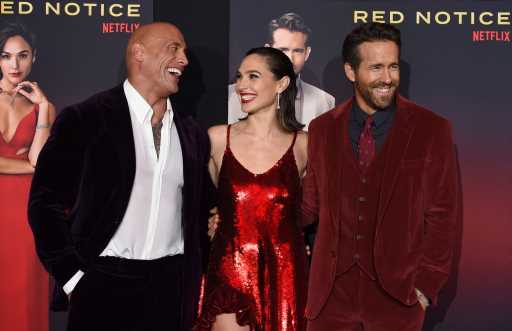 Here’s a fun riddle: What do Ryan Reynolds and Dwayne “The Rock” Johnson have in common?

Aside from the obvious answer — the impressive duo star in Red Notice, a straight-to-Netflix action film that premiered on November 5 — the actors bond over the fact that they’re exclusively girl dads. Reynolds shares 2-year-old Betty, 5-year-old Inez, and 6-year-old James with wife Blake Lively, while Johnson shares 3-year-old Tiana and 5-year-old Jasmine with wife Lauren Hashian and 20-year-old Simone with ex-wife Dany Garcia.

In a Monday interview with Access Hollywood, Reynolds gushed over his daughters. “Oh my God, I would not have it any other way,” he told the outlet. “When we had our youngest, I was quietly terrified it was gonna be a boy, because I didn’t know. We didn’t know. Because I didn’t know anything but girls. I grew up with boys, and it was like, you know, I was constantly being thrown through walls when there was a perfectly good door five feet away.”

Reynolds added that having daughters is a bonding experience with Johnson and their co-star Gal Gadot who shares 4-year-old daughter Maya, 9-year-old daughter Alma, and 4-month-old Daniella with husband Jaron Varsano, “But Dwayne and Gal, we talk a lot about that,” said Reynolds. “And there is sort of a shared kind of experience there that I think is pretty worth noting and we love, love having our girls.”

Maya and Alma even spent time with Reynolds and Lively’s daughters during the filming of Red Notice. “Actually, Gal and our daughters — because we shot this movie during a pandemic — we were all in school pods together,” said Reynolds. “So our kids and her kids, they all were in school together, it was great.”

And it’s no wonder Reynolds is so stoked about being a girl dad, as experts say a positive father-daughter relationship can determine the confidence level of young girls as they grow up. Heck, even fellow celebs like Channing Tatum have publicly boasted about their rewarding “girl dad” status and let’s not forget the time that Johnson proudly gave Tiana the best manicure in town.

During his Access Hollywood interview, Reynolds even brushed off the notion that he and Lively should try for a son, prompting a quick laugh from the actor. “No, we’re alright,” he joked.

Read about how Heidi Klum, Angelina Jolie, and more celebrity parents co-sleep with their kids.