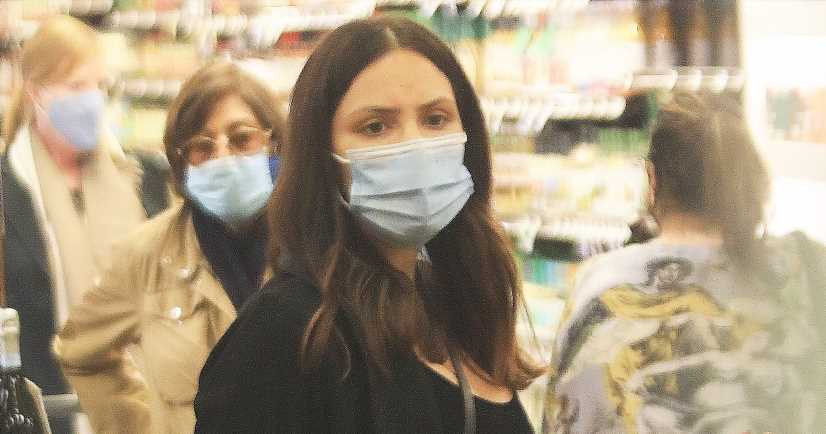 The singer, 36, paired an all-black outfit with bright sneakers and a face mask while loading up her cart. The Los Angeles native kept her budding belly hidden behind her buys.

Us Weekly confirmed in October that the American Idol alum is expecting her and husband David Foster’s first child together, his sixth. The Broadway star appeared to subtly confirm the news later that same week while unboxing alcohol.

“I just came home and opened this gift from Aperol Spritz, which for those of you who don’t know … it’s one of my favorite drinks and reminds me of being in Capri,” McPhee said on her Instagram Story at the time. “Thank you, Aperol Spritz. I won’t be drinking this anytime soon, wink, wink. But, I’m very excited! Who’s coming over for an Italian-inspired cocktail?”

The “Open Toes” singer stepped out with her baby bump on display during a November walk in Los Angeles. The expectant star cradled her stomach in a black top, a white skirt and a matching face covering while holding shopping bags and an iced drink.

She was first linked to Foster, 71, in May 2017, and the composer proposed to her the following year. The couple tied the knot in June 2019.

McPhee was previously married to Nick Cokas from 2008 to 2016. As for the Grammy winner, he has been married to B.J. Cook, Rebecca Dyer, Linda Thompson and Yolanda Hadid.

Foster became a dad in 1970 when he welcomed daughter Allison, now 50, whom he placed for adoption and later reconnected with. He went on to welcome Amy, 47, with his first wife, as well as Sara, 39, Erin, 38, and Jordan, 34, with his second. The Canada native didn’t expand his family in his third and fourth marriages.

Foster’s daughter Erin previously praised McPhee for her stepmothering skills. “It takes a very strong, graceful person to come into a family as the fifth wife and have adult daughters who are older than her and do it in a way that really creates inclusion with the family, and she just does it effortlessly,” the Barely Famous cocreator exclusively told Us of the Smash alum in September 2019. “She just makes it really easy for all of us to get along. So, we’re very grateful for her.”