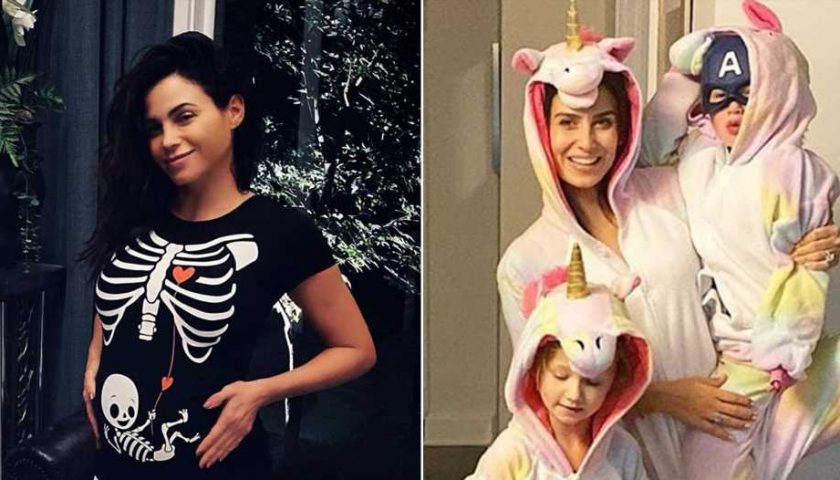 Dressing up for two! Jenna Dewan, Hilaria Baldwin and other pregnant celebrities covered their baby bumps in adorable Halloween costumes this year.

The former World of Dance host, 38, rocked two looks on Thursday, October 31, starting with an angel outfit. Her and Channing Tatum’s 6-year-old daughter, Everly, sported a similar style as they posed for a photo, complete with wings and halos.

Later that same night, the actress wore a black tee and leggings covered in bones, a skeleton baby smiling from her stomach. “This is Halloween,” the Step Up star captioned the Instagram upload.

Her boyfriend, Steve Kazee, showed off the same look on his account, writing, “Things that go ‘bump’ in the night! My 44th Happy Halloween and Baby Kazee’s first! Thank you all for the birthday wishes yesterday. Best. Birthday. Ever.”

The Tony winner and Dewan announced in September that they are expecting their first child together. “I’m nervous as can be, but I’m trying to just be calm about it and know that we’ve been doing this for billions of years, millions of years at least, so we’re going to be OK,” Kazee told Us Weekly exclusively the following month. “There’s no way to even describe how excited you are at this moment, but we’re beyond. We’re very happy. It’s an incredible experience. I’m, like, every day just in awe of the fact that there’s a life growing inside of this human being that I love so much.”

“I put our costumes together and Alec was oh so difficult, but he put it on,” the “Mom Brain” podcast cohost wrote on her Instagram Story. “Rafa on the other hand refused to trick or treat as a unicorn [and wore a Captain America outfit].”

Hilaria and the Saturday Night Live star, 61, left their outfits on to walk the dogs and go out to dinner. “[I added] silver shoes because that’s what kind of heels my spirit unicorn would wear,” she captioned a video.