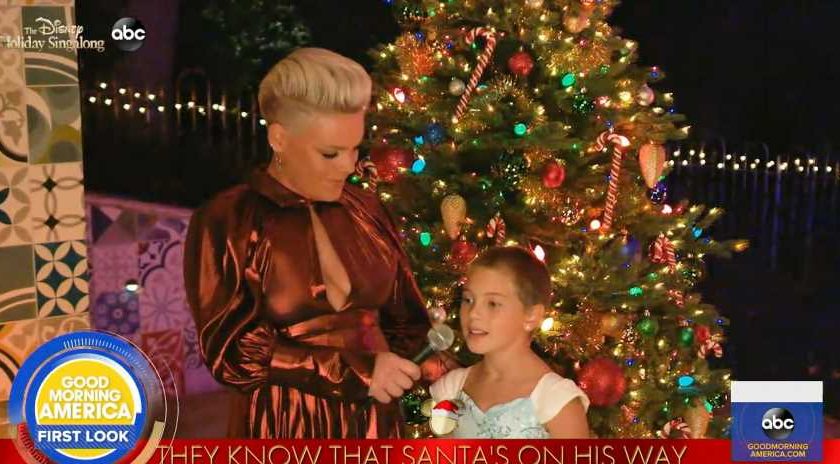 The best way to spread Christmas cheer, is singing loud for all to hear! Pink teamed up with her 9-year-old daughter, Willow, for a magical performance on Disney’s Holiday Singalong.

Ahead of the Monday, November 30, show on ABC, the network teased the mother-daughter duo’s duet on Good Morning America, and Willow stole the show.

Pink took the lead as the pair began singing “The Christmas Song” by Nat King Cole. The preview then showed off Willow’s musical chops.

“They know that Santa’s on his way, he’s loaded lots of toys and goodies on his sleigh,” the little one belted out as her mom looked proudly at her and held the microphone.

The “Just Give Me a Reason” singer wore a long-sleeve metallic gown as she sang her part, while Willow donned a Cinderella-style dress. The two performed their number in front of a decorated Christmas tree and fireplace as scenes from Disney movies were shown on the wall.

Pink teased her duet on Monday, tweeting, “Wanna see me and a special guest sing one of our fav Xmas songs? Come and sing along with us!!!! #DisneyHolidaySingalong,” alongside a preview for the show.

The “What About Us” singer is one of many celebrities taking part in the TV special. Other performers include Julianne Hough and Derek Hough, BTS, Katy Perry and Adam Lambert. The show will be hosted by Ryan Seacrest.

While Willow seems to be taking after her mom with her beautiful voice, the musician’s son, Jameson, is following his dad, Carey Hart’s sporty footsteps.

Earlier this month, Hart shared a video of the couple’s 3-year-old on his first motorcycle.

“What an epic day with my family,” the former professional motocross competitor, 45, wrote via Instagram on Sunday, November 29, alongside photos of his son biking. “Jamo’s first day on a motorcycle, and he killed it! I was shocked my how good he did his first day, and how he progressed from start to finish.”

Willow also took part in the outdoor fun, “ripping her 65,” according to the proud dad.

“Think it’s time to build them a proper track. Gonna be a fun winter!!!!!” he added.

Pink married Hart in 2006 and the pair share Willow and Jameson.