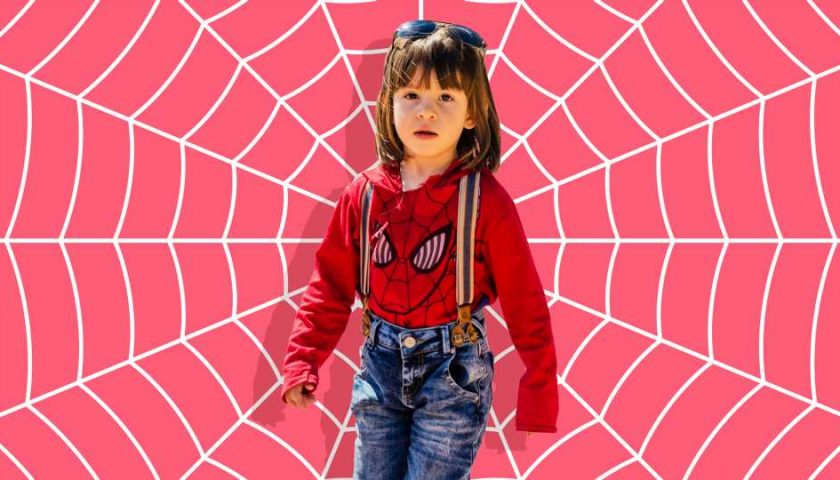 If there’s a holiday that shines a light on gender stereotypes, it’s Halloween. Generally speaking, little boys become monsters and superheroes and little girls are transformed into Disney princesses.

My daughter has always been a little different. From the first year she was old enough to express an opinion, a black cat was the costume of choice — and she remained loyal to her feline alter ego for five years. This year, age nine, she wants to be Spider-Man. And while I’m delighted that she hasn’t succumbed to Disney princess peer pressure, that she’s got to this age without spending the early part of October deciding between Anna and Elsa, part of me is still bummed.

“Spider-Man is awesome,” I told her. Meanwhile, I thought: “What about Wonder Woman or Captain Marvel?” I kept this thought to myself, because there’s enough pressure on her without me questioning her dress-up choice. Whether it’s from her classmates who want to spend their Friday nights painting their nails and braiding their hair (girls) or tell her she can’t kick the ball with them “because she’s a girl” (boys), or relatives who insist on calling her a tomboy because she’d rather climb trees than draw with glitter pens. The truth is, I’d send her trick-or-treating in a cardboard box if that was what she wanted. And if she wanted to be Anna, Elsa, Cinderella or Sleeping Beauty, I’d get on board with that too, because gender equality doesn’t involve forcing kids (or either sex) to go against the grain just to make a point.

Dress up should be fun, Halloween should be fun, and I’m aware that there’s nothing fun about Mom’s opinions getting in the way of all the spooky decorations and candy collecting.

But back to Wonder Woman and Captain Marvel. What does Spider-Man have that they don’t, apart from the obvious? I suspect part of the reason my daughter thinks Spidey is the bomb is that all the boys she hangs out with (friends, cousins and three younger step-brothers) feel the same. They just don’t rate female superheroes in the same way, even though those chicas have superhuman strength, speed and durability, and just as many cool tricks as their male counterparts.

If the other kids in the playground think it’s weird when my girl rocks up in her Spider-Man costume (complete with plastic web-shooters attached to each wrist), she’s either not telling me about it, or she’s having too much superhero fun to notice. But if my son went to a Halloween party as Captain Marvel, there’s no doubt he’d get more than a little pushback. (He’s dealt with enough intimidation as a boy with long hair, but that’s another story.)

And that’s the difference. Because there’s a bigger issue here beyond Spider-Man vs. Captain Marvel (and for the record, Peter Parker has always been my fave boy superhero; who wouldn’t want to be able to crawl up walls and balance on a wire with one finger?). It boils down to one thing: little boys and girls are encouraged to worship male superheroes (as well as male athletes, male business leaders and anyone else doing remarkable things while possessing a penis). But when it comes to female superheroes, female athletes, female business leaders, etc., we can’t say the same thing. Giving Wonder Woman and Captain Marvel their own movies after decades of being mere backup to their male counterparts may be progress, but it’s not enough. It’s great that little girls are being empowered and inspired by female superheroes, but it’s not enough. It’s not enough to market Wonder Woman and Captain Marvel to girls only.

Thanks to a wider discussion in the media and at school about gender equality, young girls who want to wear their love for Spider-Man on their backs (literally) are generally able to do so without incurring much more than a condescending comment. But thus far, the part of the discussion that tackles the rights of our kids to make personal choices about their appearance, their interests and their passions has failed to address the fact that there are boys out there who want to have long hair, or long nails… or a Captain Marvel T-shirt that isn’t from the “Girls” section. Since my kids were tiny, TV shows, adverts and just people in general have exposed them to outdated, gender normative ideas about what girls and boys are supposed to be like.

My daughter is only nine. A bold, spirited nine-year-old who, in her quest to figure herself out, often feels more comfortable as one of the boys than one of the girls. She doesn’t mind being different, but she still wants to fit in. And on October 31, she’ll be doing that in a Spider-Man costume.

Maybe it’s up to me to be Wonder Woman.