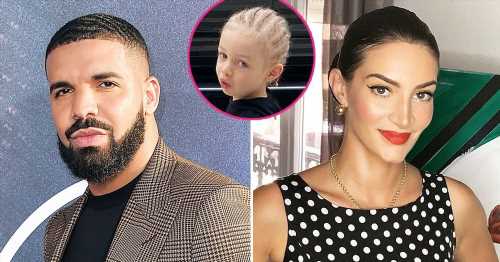 In it together! Drake and Sophie Brussaux are loving life with their 3-year-old son, Adonis.

The toddler’s parents “are very happily coparenting together in Toronto with both of them sharing custody,” a source exclusively tells Us Weekly. “Adonis is a very happy little boy.”

The little one arrived in October 2017, and the rapper, 34, confirmed his paternity in June of the following year in his song “March 14.”

The Grammy winner waited to address Brussaux’s birth despite Pusha T rapping about it in “The Story of Adidon” because he was waiting on a DNA test, Drake explained during a December 2019 “Rap Radar” podcast episode.

“To be honest with you, I did a DNA test for my son and it came back to us and it said the DNA test got ruined in transit and they couldn’t be 100 percent sure that that was my son or not,” the “God’s Plan” rapper said at the time. “I was in a really weird pending situation where I didn’t want to go tell the world that that was my son and it wasn’t.”

The new dad added that he didn’t have any plans to mend his relationship with Pusha T, 43, explaining, “He told the world that the biggest artist at the time has a kid that he hasn’t told you about. I knew, for me, it was over at that point. It wasn’t even about battle rap.”

While the Degrassi alum initially kept his baby boy’s face off of social media, he shared photos of Adonis for the first time in March. “I love and miss my beautiful family and friends and I can’t wait for the joyful day when we are all able to reunite,” the Canada native captioned an Instagram slideshow at the time.

The American Music Award winner also showed Adonis heading off to school and celebrating his birthday in September and October, respectively.

“Three years ago, I was finally meeting you for the first time, after a long 24-our labor,” Brussaux, 31, gushed via Instagram while sharing party pics. “I’m so proud of the little man you’re becoming, I love you more than life. The world is YOURS! We did that @champagnepapi.”

With reporting by Nicholas Hautman