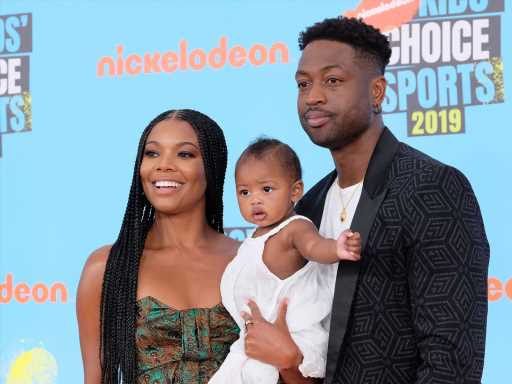 As parents, we all have our kids’ best interests at heart — which should mean consistently acting in their best interests, too. That, of course, includes being as supportive as possible of our kids’ true selves, whether it’s their sexual orientation or their gender identity or otherwise. Of course, even the most loving and forward-thinking parents are still, you know, parents (read: we old) and sometimes need to do a bit of research in order get with the times and best support our kids. Case in point: Gabrielle Union and Dwyane Wade (who are certainly winning #parentgoals awards in our book) had to turn to trusty Google when Dwyane’s transgender daughter, Zaya, asked them to gift her a demisexual flag for her birthday.

“She asked for a demisexual flag for her birthday, and Dwyane’s like to me, ‘Do you know what that is?’” Union told Taraji P. Henson this week, during her appearance on the first episode of Henson’s new Facebook Watch series, Peace of Mind With Taraji.

It’s great to see even total badasses like Union and Wade admitting that they don’t know everything — and laughing about having to look up what “demisexual” meant. (For the record, folks who are demisexual only experience sexual attraction when there is an established emotional connection first).

“We only know what we know,” Union told Henson and her co-host Tracie Jade Jenkins on the episode. “You have to be open to embrace what we don’t know.”

Union noted that Zaya explained to her and Wade that the birthday photo actually made Zaya feel “outed,” because people started to analyze how she was dressed and extrapolating her gender identity from that — which, by the way, is not how things work as gender expression and identity do not have to be linked.

However, Union, Wade, and Zaya have all emerged ever stronger on the other side of difficult experiences like the incident with the photo.

“Zaya’s peace is non-negotiable,” Union told Henson and Jenkins. It’s clear this is one pair of parents whose priorities are right where they belong: with the well-being of the kid in question.