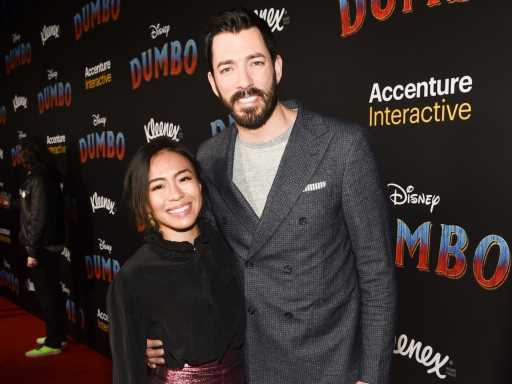 Drew Scott is letting everyone in on the unexpected turns new fatherhood has brought him, including the stinky surprises.

On Aug 9, Scott posted a selfie with his wife Linda Phan and newborn son Parker with a hilarious spin. Scott posted the photos with the caption, “Parker shares his love in creative ways❤️💩.”

In the first photo, we see Scott and Phan giving hilarious faces because of the little “surprise” Parker left them. In case you didn’t see it in the first pic, they provide a close-up of the heart-shaped poop stain he left them. We couldn’t help but cackle at this all-too-relatable moment from the new parents!

The loving couple has been giving updates here and there on their son, whom they welcomed back in May. While the updates are far between, we can’t help but get excited at another glimpse into the little family’s life!

In case you missed it, after over a decade together, Drew and Phan welcomed their son Parker James in May 2022,  specifically on a very special date: their fourth wedding anniversary. The loving couple confirmed it on their popular At Home podcast, saying, “Parker decided to come very efficiently on our anniversary. He’s stealing the show. It’s no longer about you and me on our anniversary,” Drew joked to Phan.

Drew also said in a recent interview with Entertainment Tonight that fatherhood “unlocks a side you didn’t know you had.” He added, I have this deep love for Linda, but then, all of a sudden, that’s the shallow pool. I’m not saying shallow with Linda, I love Linda, but there’s a whole other depth to Linda and my love together with Parker. It’s amazing just seeing his face when he looks at you, like, once he started focusing in and he locks eyes with you — oh, your heart melts. It’s amazing.”