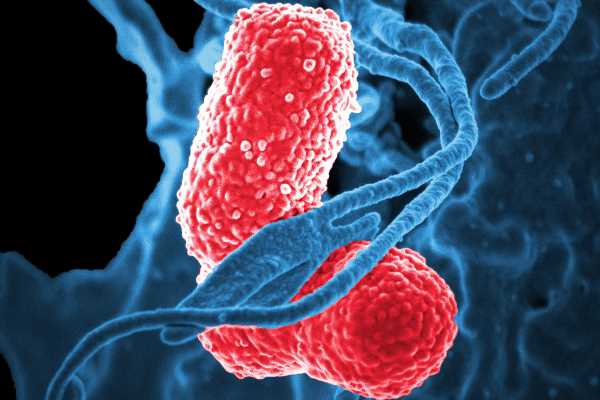 Scientists have produced and tested, in mice, a vaccine that protects against a worrisome superbug: a hypervirulent form of the bacteria Klebsiella pneumoniae. And they’ve done so by genetically manipulating a harmless form of E. coli, report researchers at Washington University School of Medicine in St. Louis and VaxNewMo, a St. Louis-based startup.

Klebsiella pneumoniae causes a variety of infections including rare but life-threatening liver, respiratory tract, bloodstream and other infections. Little is known about how exactly people become infected, and the bacteria are unusually adept at acquiring resistance to antibiotics. The prototype vaccine, details of which are published online Aug. 27 in Proceedings of the National Academy of Sciences, may offer a way to protect people against a lethal infection that is hard to prevent and treat.

“For a long time, Klebsiella was primarily an issue in the hospital setting, so even though drug resistance was a real problem in treating these infections, the impact on the public was limited,” said co-author David A. Rosen, MD, PhD, an assistant professor of pediatrics and of molecular microbiology at Washington University. “But now we’re seeing Klebsiella strains that are virulent enough to cause death or severe disease in healthy people in the community. And in the past five years, the really resistant bugs and the really virulent bugs have begun to merge so we’re beginning to see drug-resistant, hypervirulent strains. And that’s very scary.”

Hypervirulent strains of Klebsiella caused tens of thousands of infections in China, Taiwan and South Korea last year, and the bacteria are spreading around the world. About half of people infected with hypervirulent, drug-resistant Klebsiella die. Two types in particular – known as K1 and K2 – are responsible for 70 percent of the cases.

Rosen; senior author Christian Harding, PhD, a co-founder of VaxNewMo; first author Mario Feldman, PhD, an associate professor of molecular microbiology at Washington University and a co-founder of VaxNewMo; and colleagues decided to create a vaccine against the two most common strains of hypervirulent Klebsiella. The bacterium’s outer surface is coated with sugars so the researchers designed a glycoconjugate vaccine composed of these sugars linked to a protein that helps make the vaccine more effective. Similar vaccines have proven highly successful at protecting people against deadly diseases such as bacterial meningitis and typhoid fever.

“Glycoconjugate vaccines are among the most effective, but traditionally they’ve involved a lot of chemical synthesis, which is slow and expensive,” Harding said. “We’ve replaced chemistry with biology by engineering E. coli to do all the synthesis for us.”

The researchers genetically modified a harmless strain of E.coli, converting it into tiny biological factories capable of churning out the protein and sugars needed for the vaccine. Then they used another bacterial enzyme to link the proteins and sugars together.

To test the vaccine, the researchers gave groups of 20 mice three doses of the vaccine or a placebo at two-week intervals. Then they challenged the mice with about 50 bacteria of either the K1 or the K2 type. Previous studies had shown that just 50 hypervirulent Klebsiella bacteria are enough to kill a mouse. In contrast, it takes tens of millions of classical Klebsiella – the kind that affects hospitalized people – to be similarly lethal.

“We are very happy with how effective this vaccine was,” Feldman said. “We’re working on scaling up production and optimizing the protocol so we can be ready to take the vaccine into clinical trials soon.”

The goal is to get a vaccine ready for human use before the hypervirulent strains start causing disease in even larger numbers of people.

“As a pediatrician, I want to see people get immunity to this bug as early as possible,” Rosen said. “It’s still rare in the United States, but given the high likelihood of dying or having severe debilitating disease, I think you could argue for vaccinating everybody. And soon we may not have a choice. The number of cases is increasing, and we’re going to get to the point that we’ll need to vaccinate everybody.”