Researchers of the laboratory Physics for Medicine Paris laboratory and collaborators have achieved a major advance by studying the brain during complex cognitive tasks. Using a new imaging method called functional ultrasound imaging (fUS imaging) and providing a high spatial and temporal resolution, the research team has imaged the activation in the brain of a primate performing visual tasks. The high-sensitivity measurements have enabled the researchers to track the propagation of neuronal information across the brain. The work has just been published in Nature Communications.

Over the past 20 years, neuroimaging methods have revolutionized our understanding of the brain. They enable researchers to monitor cerebral activity and to elucidate the mechanisms of the brain. Traditional methods like functional MRI or electrophysiology, however, remain cumbersome, and require averages over repeated acquisitions.

Researchers of Physics for Medicine Paris now present a disruptive technology with very high sensitivity and high spatial and temporal resolution. So far, the technique has been applied to study the brain at resting state or in response to simple somato-sensory stimuli. Here, fUS imaging has been used to monitor complex cognitive tasks. The researchers measured the local variations of blood flow in a primate brain region called the supplementary eye field (SEF) with a 100-micron spatial resolution and over 10 ms time scales. This brain region is associated with decision-making in the context of predefined rules. 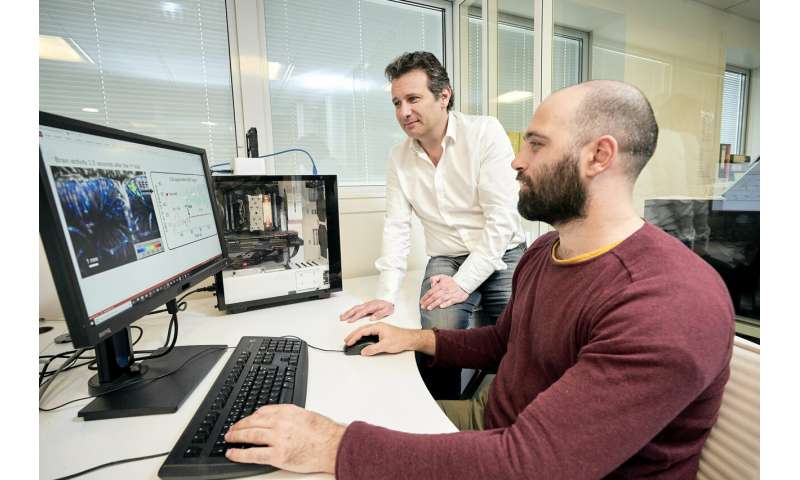 In practice, the primates are performing a series of oculomotor tasks (tracking a point target projected on a screen, gazing oppositely to the point target, etc.) while their cerebral activity is monitored using a noninvasive fUS imaging device.