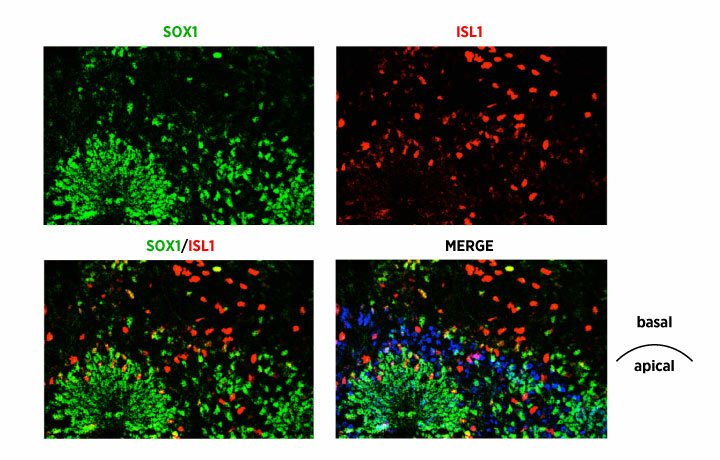 ‘Organoids’ that mimic the developing spinal cord could assist research and drug development for neurodegenerative diseases such as spinal muscular atrophy and amyotrophic lateral sclerosis.

Researchers from A*STAR’s Institute of Molecular and Cell Biology (IMCB), with colleagues in Singapore and China, have successfully developed spinal organoids from pluripotent stem cells derived from healthy people, and from patients with spinal muscular atrophy (SMA).

“We are one of the first labs to report the formation of spinal organoids,” says IMCB principal investigator Shi-Yan Ng. “Our study presents a new method for culturing human spinal-cord-like tissues that could be crucial for future research.”

The stem cells were coaxed into differentiating into spinal cord precursor cells using a chemical cocktail. They were then encapsulated in a gel that was rich in extracellular matrix. The spinal organoids that ultimately developed demonstrated characteristics of the developing spinal cord, with diverse types of cells, including motor neurons, the nerve cells that send nerve impulses from the brain or spinal cord to skeletal muscles; interneurons, which transmit impulses between nerve cells; and astrocytes, star-shaped cells that play various support roles within the nervous system.

SMA is a degenerative disease of motor neurons that mainly affects children. It is caused by a gene mutation that leads to a protein deficiency that affects spinal motor neurons, causing nerve degeneration in skeletal muscles, arrested childhood developmental milestones, paralysis and ultimately, in severe cases, premature death. Much remains to be learned about how this disease develops and how it could be treated.

Some studies have indicated that the disease could begin in the early stages of embryonic motor nerve development. Ng and her team compared the development of motor neurons in their spinal organoids formed from healthy people, and from patients with SMA. They found that motor nerve cells developed similarly in both types of organoid until they were fully formed around day 35. Between day 28 and 35, the motor nerve cells in the SMA spinal organoids began to degenerate. This finding implies that SMA may not be a disease that happens during nerve development as previously suggested.

Further investigations showed that the protein deficiency that leads to SMA causes motor nerve cells—which don’t normally divide—to begin dividing again, ultimately leading to their death. When the researchers used a small molecular inhibitor to block a group of enzymes involved in triggering this ‘re-entry of the cell cycle’ , a larger number of motor neurons were able to survive.

The team’s findings suggest that the spinal organoids could be used to study the development of spinal muscular atrophy and other motor neuron diseases. They could also play a role in drug testing prior to clinical studies in patients.

The team’s spinal organoids were rich in motor neurons, but lacked sensory neurons, meaning they could not be used for the study of sensory-motor connectivity.