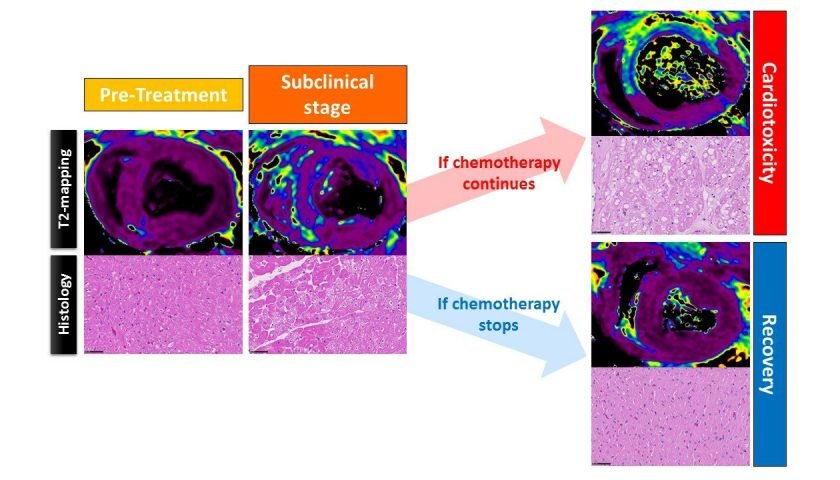 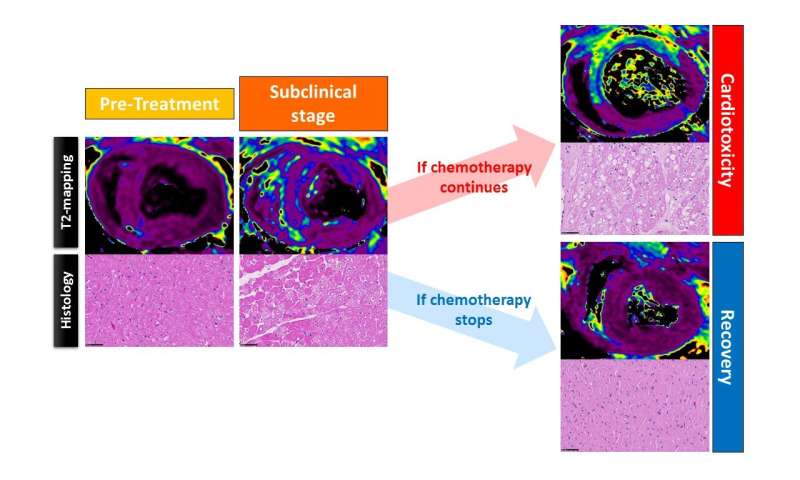 Every year, 4 million new cases of cancer are diagnosed in Europe. Advances in cancer treatment sometimes come at the cost of major adverse effects, and one of the most prominent is cardiotoxicity. Myocardial toxicity affects as many as 25 percent of patients undergoing treatment with commonly used anticancer drugs. The effects of this damage can be severe, condemning the cancer survivor to chronic heart disease and even causing premature death.

Now, researchers at the Centro Nacional de Investigaciones Cardiovasculares (CNIC) have identified a very early marker of cardiac damage in patients undergoing therapy with anthracyclines, a family of drugs commonly used to treat cancer. This finding will enable the early diagnosis of cardiotoxicity associated with this group of widely used chemotherapy drugs.

The study is published in the Journal of the American College of Cardiology (JACC) and was coordinated by cardiologist Dr. Borja Ibañez, clinical research director at the CNIC. Dr. Ibañez said the results have important implications for therapy because the detection this drug-induced damage at very early stages will permit “the implementation of treatments to prevent further deterioration in heart function and a clinical management more closely adapted to the needs of each patient.” The identified marker is affected much earlier than any of the markers used in current clinical practice.

This valuable discovery was possible thanks to a new pig model of anthracycline-induced cardiotoxicity developed by the CNIC team. The pig is an especially useful experimental model in cardiovascular research because the pig and human hearts are very similar.

Dr. Ibáñez described three major challenges in cardio-oncology: to identify the mechanisms underlying the cardiac damage associated with these highly effective anticancer treatments; to diagnose myocardial damage early (currently, damage is often detected only after it is irreversible); and to develop specific cardiotoxicity treatments based on an understanding of the underlying mechanism, and thus replace the nonspecific and generally ineffective treatments in current use.

In the JACC study, animals received increasing doses of the anthracycline drug doxorubicin over 10 weeks. This strategy allowed the accumulation of the drug in the heart muscle without major exposure of other organs.

Using the sophisticated magnetic resonance imaging technology, the research team was able to study a range of parameters on a weekly basis, and thus identify indicators of damage much earlier than changes in any of the markers used in current clinical practice. Philips scientist Dr. Javier Sánchez-González, joint leader of the study, said, “We found that the first parameter to show any alteration is T2 mapping, which indicates the presence of edema, an accumulation of water, and this finding was later confirmed by histological studies.”

First author Carlos Galán-Arriola said, “This edema occurs because doxorubicin begins to damage the mitochondria inside the heart muscle cells, the cardiomyocytes, and this damage triggers edema within these cells.” Mitochondria are the ‘power generators’ inside cells, and permanent mitochondrial damage leads to severe and irreversible malfunctioning of the cardiac muscle.

The JACC study confirms that T2 mapping is altered much earlier than any other known parameter in current use, occurring even before any local or regional alterations to cardiac contractility. The availability of such an early cardiotoxicity marker could help physicians identify patients who tolerate anthracycline treatment, even at high doses. Dr. Ibañez said that in this patient group, “cancer recurrence could be treated with anthracyclines at the high doses that are the most effective.” In other patients, “development of this marker at a low cumulative anthracycline dose could be an indication for preventive cardioprotective therapy or an adjustment to the chemotherapy regimen.”

While these results are very promising, Dr. Ibáñez emphasized that they await confirmation in patients. The research team has already launched a clinical study in collaboration with the Hospital Universitario Fundación Jiménez Díaz. This study forms part of the MATRIX project, which aims to develop innovative treatments for the cardiotoxicity associated with cancer. “We will soon recruit 100 lymphoma patients whose chemotherapy regimen includes high-dose anthracyclines. Before each chemotherapy cycle, these patients will have an advanced MRI scan, including novel sequences developed by the research team, and will be monitored very closely.”