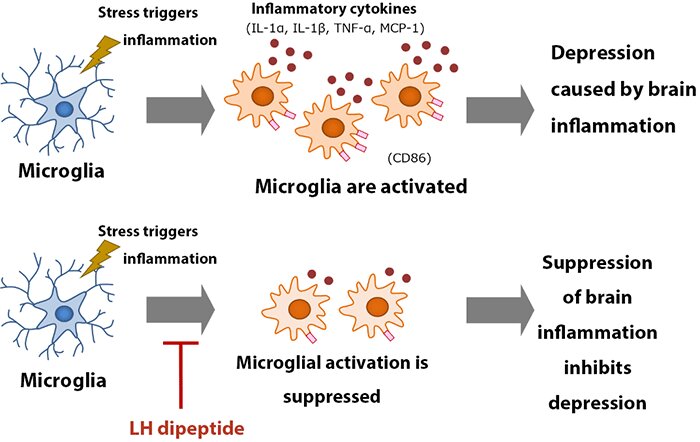 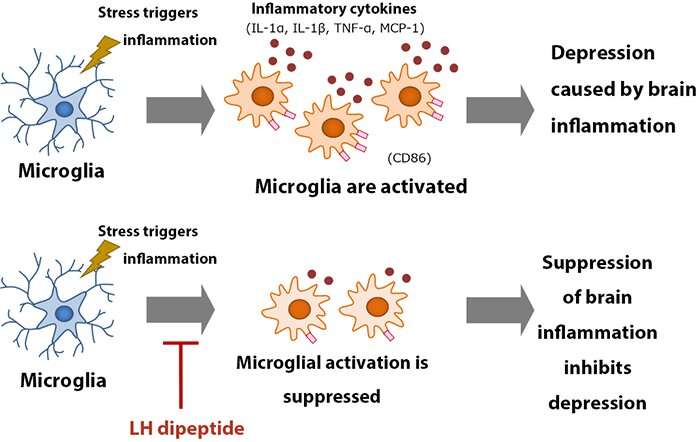 A research group led by Professor Tomoyuki Furuyashiki and Associate Professor Shiho Kitaoka (Graduate School of Medicine) in collaboration with researcher Yasuhisa Ano of Kirin Holdings have made discoveries regarding the effect of the dipeptide leucine-histidine (LH) in suppressing microglial activation and depression-associated emotional disturbances. LH dipeptide is found in fermented foods such as blue cheese and natto (fermented soy beans). Foods rich in LH dipeptide may be a safe, preventive method for maintaining good mental health.

These research results were first reported in the online academic journal Nutrients on September 9 2019.

Depression is one of the most common mental disorders and remains difficult to treat, as numerous patients don’t respond to available psychological or pharmacological treatments. Consequently, possible methods of preventing depression in daily life, such as nutritional approaches, are gaining increasing attention.

Recent studies have shown the role of microglia in depression. Microglia are immune cells in the central nervous system that are normally responsible for removing waste products. However, they can cause inflammation in the brain when they are activated. Many findings have suggested a link between depression and brain inflammation, and anti-inflammatory drugs have been shown to improve depression symptoms in trials. It has also been reported that consumption of fermented products is associated with reduced depression symptoms. However, the nutritional components that suppress microglia activation and depression are not well understood.

In this study, the effects of 336 dipeptides on microglia activation were evaluated, and LH dipeptide was discovered to be a potent anti-inflammatory agent. LH dipeptide inhibited the secretion of inflammatory cytokines (signaling molecules such as TNF-α that are secreted from cells to promote inflammation) from microglia. Further studies were performed on mice to evaluate LH dipeptide’s impact on brain inflammation and emotional disturbances.

They then analyzed the effect of LH dipeptide on depression-associated emotional disturbances. First, individual mice were exposed to the Tail Suspension Test (TST), where they were suspended by their tails in a box for 6 minutes. The time that mice are immobile was measured, as this is a behavioral indication of depression. LPS treatment induced brain inflammation and prolonged immobility time in the TST. However, repeated oral administration with LH dipeptide was shown to prevent this pro-depressive effect of LPS. Second, mice were confronted with repeated social defeat stress (R-SDS). This involved putting each of the test mice in cages with an aggressive mouse for 10 minutes daily over a period of several days. Defeated mice that were treated with LH dipeptide showed less social avoidance after the R-SDS. These mice also displayed less anxiety during the Elevated Plus Maze test, as they spent more time in the open arms of the maze. These results suggest that oral administration of LH dipeptide prevents depression-associated emotional disturbances.