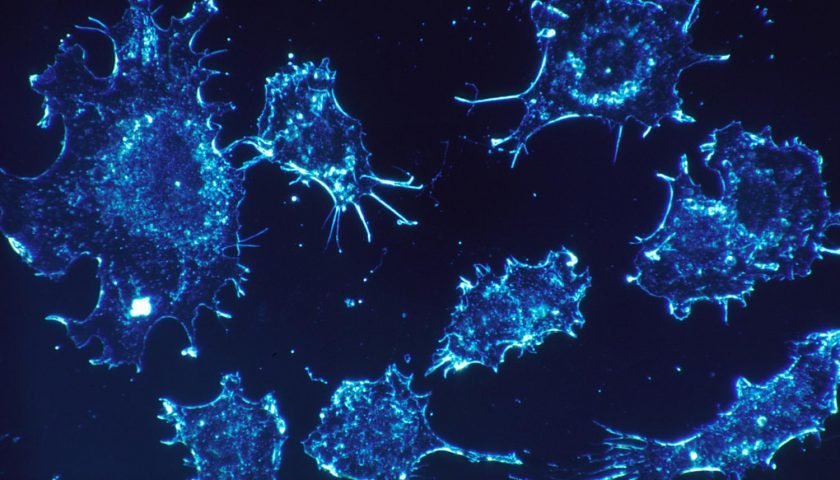 An estimated 15 to 20 percent of all breast cancer patients are “triple negative.” These unfortunate women lack three crucial treatment targets—the estrogen receptor, the progesterone receptor and human epidermal growth factor receptor 2. Because they lack these targets, most triple negative patients are treated with standard chemotherapy, rather than the preferred targeted drugs. Triple negative breast cancer (TNBC) also disproportionately affects younger women, women of African descent and women with mutations in the BRCA1 gene.

The lack of better medicines for TNBC prompted a team of researchers to look for novel drug targets and new ways to disrupt disease-causing pathways. In the process, they found a pair of new weapons, two seasoned drugs that—when tested in mice—produced encouraging results.

“We think we may have found a way to treat resistant breast cancers that currently have no targeted therapy by repurposing two older drugs, metformin and heme, that are already in the marketplace,” said the study’s senior author Marsha Rosner, Ph.D., the Charles B. Huggins Professor in the Ben May Department for Cancer Research at the University of Chicago.

Neither drug was designed to treat cancer. Metformin, discovered in 1922 and used clinically since 1957, was developed to treat type-2 diabetes. It decreases glucose production by the liver and increases insulin sensitivity. In 2016, it was the fourth most prescribed medication in the United States, with more than 81 million prescriptions.

Although cancer is more common in patients with diabetes than in healthy controls, patients who take metformin for diabetes are less likely to develop cancer. The drug has a direct anti-cancer effect that can repress the proliferation of tumor cells.

The other drug, heme, marketed as panhematin, is older still. It was first crystallized from blood in 1853. It is now used to treat defects of heme synthesis. These defects can cause porphyrias, a group of eight related ailments. Many of these patients are treated with injections of panhematin, derived from processed red blood cells.

“To our knowledge,” Rosner added, “this is the first joint use of these two drugs. We think we have elucidated a new mechanism, something basic and fundamental, and found ways to use it.”

The researchers found that the primary anti-cancer target for heme is a transcription factor known as BACH1 (BTB and CNC homology1). This protein is often highly expressed in triple negative breast cancers and is required for metastasis. High BACH1 levels often lead to poor outcomes. Fortunately, BACH1 “is not essential,” the authors note, “and therefore may be inhibited with few side effects.”

BACH1 targets mitochondrial metabolism. It controls the rate of transcription of genetic information from DNA to messenger RNA by binding to a specific DNA sequence. This can suppress transcription of mitochondrial electron transport chain genes, a key source of cellular energy. When BACH1 is high, this energy source is shut down.

“We found we could basically put a thumb on this trouble-making BACH1 protein,” Rosner said. “We can get rid of it. We can do that with heme. It’s part of a normal process.”

“When cancer cells are treated with hemin, BACH1 is reduced, causing BACH1-depleted cancer cells to change metabolic pathways,” said co-author Jiyoung Lee, Ph.D., an instructor affiliated with the Rosner laboratory. “This causes cancers that are vulnerable to metformin to suppress mitochondrial respiration. We found that this novel combination, hemin plus metformin, can suppress tumor growth, and we validated this in mouse tumor models.”

“We think we can reach three distinct populations of patients with triple negative breast cancer,” added Joseph Wynne, MD, Ph.D., a clinical fellow in the Rosner lab. “Patients with low BACH1 and high mitochondrial gene expression would likely respond to metformin alone. For patients with high BACH1 and low mitochondrial gene expression, we would predict metformin resistance. However, our work suggests that the addition of heme treatment would sensitize them to metformin. The third group is somewhere in between. We are not quite sure of their level of metformin resistance, but anticipate that they would also respond to combination treatment with metformin and heme.”

“Our results highlight BACH1 as a key regulator of mitochondrial metabolism and a determinant of TNBC response to metformin treatment,” the authors wrote. “The role of BACH1 as a novel regulator of metabolism has not previously been recognized or studied. This study,” they add, “will open new avenues for future investigation.”

The findings, the authors note, could extend beyond breast cancer. BACH1 expression is enriched not only in TNBC but is seen in many cancers, including lung, kidney, uterus, prostate and acute myeloid leukemia. BACH1 inhibition of mitochondrial electron transport chain genes appears to be a common mechanism.