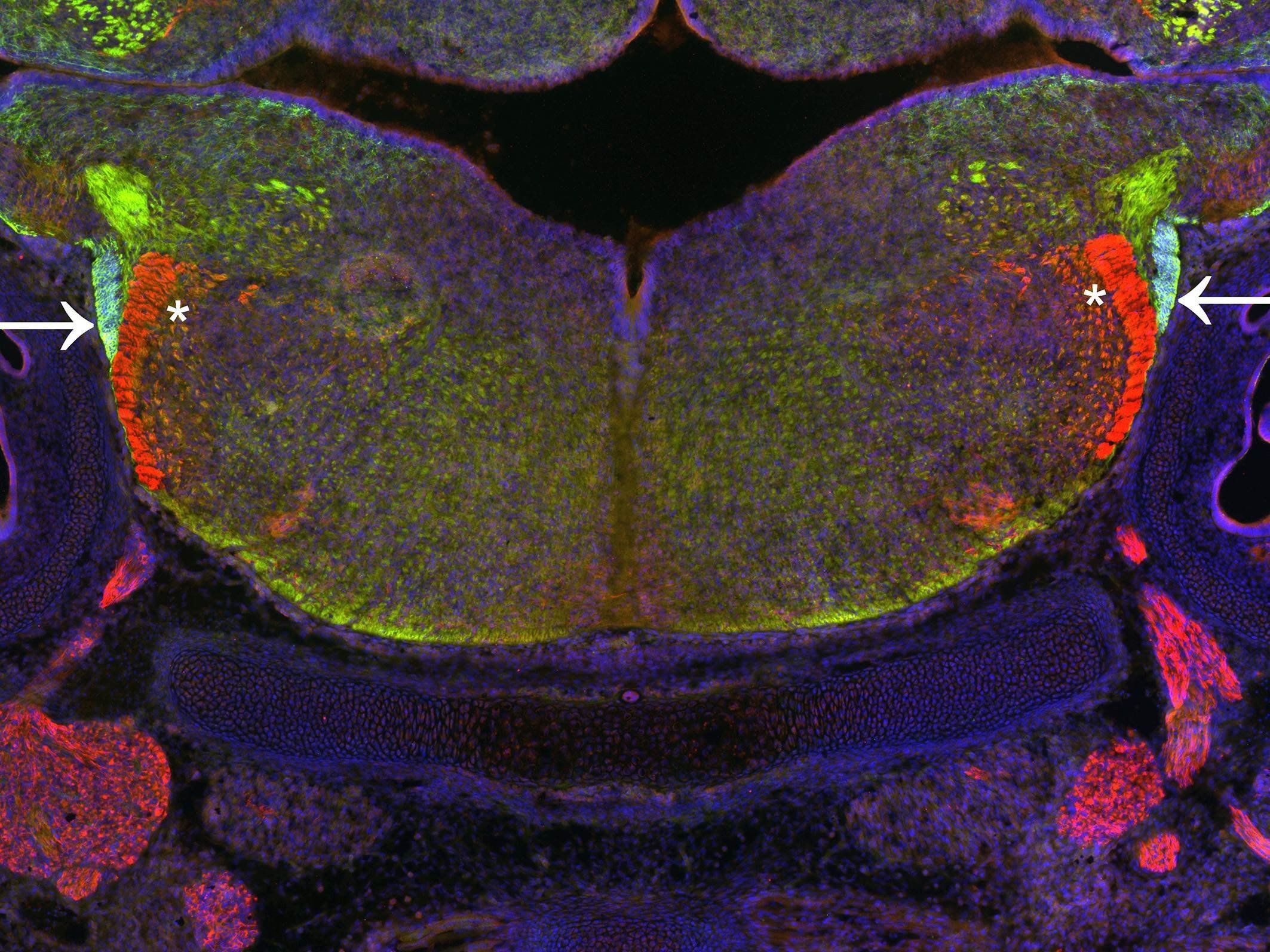 Researchers examined the brain development of mouse embryos. They concentrated on a pool of neuronal precursor cells that develops in the hindbrain about ten days after fertilization. These mature into nerve cells and then migrate to other regions in the developing hindbrain. Similar complex cell migrations also occur in humans during early brain development. “However, there is still little understanding of how the whole process works,” explains Prof. Dr. Sandra Blaess from the Institute of Reconstructive Neurobiology at the University of Bonn.

It is known that a protein called GLI3 plays a role in the organization of the nascent brain. But what exactly is its function in hindbrain development? This question was investigated by Erick Martinez-Chavez, Ph.D. student of Prof. Blaess, together with his colleague Claudia Scheerer and Dr. Andrea Wizenmann from the University of Tübingen. For this purpose, the scientists first switched off GLI3 production in mice completely. As a result, the migration of these nerve cells was severely disturbed in the embryos.

The researchers then repeated their experiment, but only stopped GLI3 production in the developing nerve cells. These were surprisingly unperturbed by this: They started their journey to their target regions as normal. GLI3 is therefore not directly needed to get them going. “Its function must be somewhere else,” emphasizes Martinez-Chavez. But where?

Does a nerve path function as a “railroad”?

Outside of the brain and spinal cord (the central nervous system), there are countless other nerve pathways and nerve cells in animals, which in their entirety are referred to as the peripheral nervous system. They are for instance responsible for transmitting electrical impulses to the muscles.

Although peripheral nerve cells are located outside the brain, they form projections that extend into the brain. They do not do this individually, but in the form of bundles—similar to a cable harness in a computer. Brain researchers then speak of nerve tracts.

The Bonn scientists have now been able to show that some of the neurons seem to orient themselves along one of these tracts when migrating to their target region: The cells move along the tract almost like on a rail. But this only worked in mouse embryos that produced GLI3. In embryos lacking GLI3, the bundling of nerve processes was much looser than normal: The paths frayed, so to speak a feature that was clearly visible under the microscope. “We assume that the fraying of the nerve tracts leads to the loss of their rail function,” says Prof. Blaess. The function of GLI3 in the formation of the tract and the mechanisms regulating the interaction between nerve cells and the tract still need to be clarified in further studies.