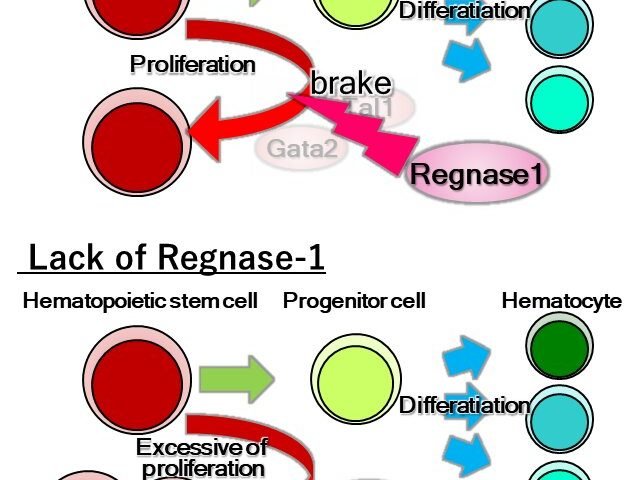 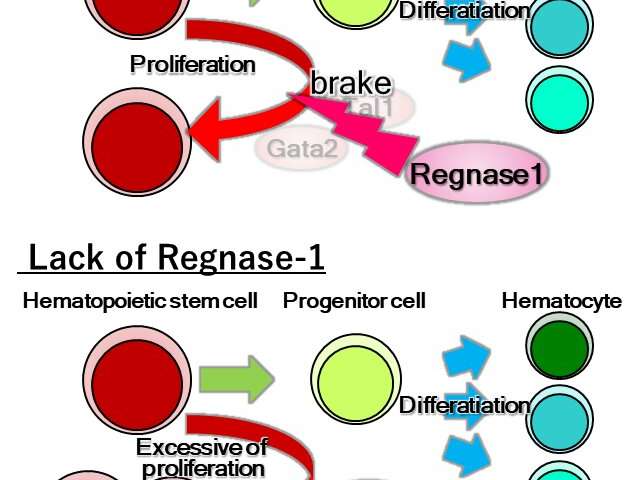 The body needs to create a continuous supply of blood cells to enter circulation. Blood cells have a wide variety of functions ranging from supplying oxygen to tissues, fighting infections, and enabling the blood to clot upon injury. Avoiding deficiency of these cells or their excessive proliferation must involve a strict regulatory mechanism, but much remains to be clarified about how this works.

A team led by Osaka University has shed light on this issue by revealing that a molecule called Ragnase-1 is key to regulating the renewal and differentiation of hematopoietic stem and progenitor cells (HSPCs), from which all blood cells are derived. They show how dysfunction of this molecule can lead to an inability to regulate blood cell production, which can have adverse effects such as the development of blood-based malignancies.

In this new study, reported in Nature Communications, the team first used a computer-based analysis to identify those genes that differed markedly in their expression between adult and embryonic HSPCs. Among these genes, they then selected Ragnase-1 for further analyses, given earlier findings of its role in the differentiation of another stem cell type. These further analyses included experiments with the deletion of one or both copies of the Ragnase-1 gene in mice, followed by evaluations of stem cell differentiation into other blood cell lineages and the overall health of these mice.

“Our findings showed that the deletion of both or even just one of the copies of Ragnase-1 led to abnormalities in the renewal and differentiation of HSPCs from the bone marrow,” corresponding author Nobuyuki Takakura says. “The Ragnase-1 knockout mice also showed physiological abnormalities like weight loss and an enlarged spleen—and they died at a young age.”

The team then looked into the mechanism by which Ragnase-1 facilitates its functions. They found that it exerts regulatory activity at the post-transcriptional level by degrading target mRNAs, Gata2 and Tal1, a process that is important for controlling hematopoiesis.

“Our findings showed that this activity of Ragnase-1 is key to determining whether stem cells remain in a quiescent state, self-renew to maintain a pool of such cells for future differentiation, or start to differentiate into the various blood cell lineages depending on the current needs of the body,” lead author Hiroyasu Kidoya says.

The team’s finding that Ragnase-1 plays a key role in the self-renewal and differentiation of HSPCs provides a new target for therapeutic strategies aimed at treating diseases such as leukemia.