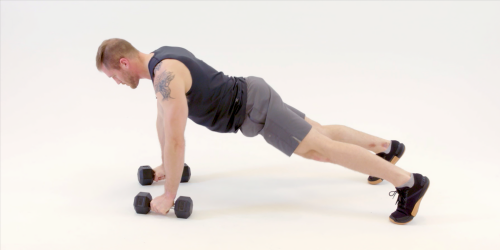 The renegade row is a core training staple that helps you to master other multi-joint movements—but are you sure you’re even doing the exercise correctly?

For this basic gym necessity, you shouldn’t settle for anything other than perfect form—especially because it’s such a simple, essential movement that can help you progress to other exercises when done properly. Let Men’s Health fitness director Ebenezer Samuel, C.S.C.S. and associate fitness editor Brett Williams guide you through the move’s subtleties, saving you from the bad habits that are keeping you from unlocking your fitness potential.

Before you grab your dumbbells (or kettlebells), hit the ground and get pulling, take note that it’s extremely important to pay attention to the subtleties of the movement here. You’re not just flailing on the ground and twisting your body to pull the weight around wildly.

Also, be sure to avoid setting up with your hands in front of your shoulders. You’ll commonly see this in group fitness classes when people have to do renegade rows while under fatigue, and they start to hike their butts in plank position and shift their shoulders back away from their hands. You’re asking the shoulders to stabilize from a less than natural angle, so you don’t want this to happen.

Row Back, Not Up

Eb says: When you start to do the row, don’t focus on moving the dumbbell up in a straight line. Instead, focus on driving your elbow back toward your lower ribs. This will help you avoid over-rotating through your torso at the start of the row and make it easier to keep your hips and shoulders square to the ground (which is critical to the entire move). This will also insure that you’re firing from your lats and rhomboids first on the row, instead of over-involving your biceps.

Eb says: The great challenge of completing the row portion is owning the plank position and not rotating at your hips. This move is easy if you’re willing to be sloppy, but if you want to really lock in your form and get better back and core development, you need to battle to keep your hips and shoulders square to the ground at all times.

That isn’t easy, even with a light weight, because your body’s first instinct will be to hike your hip on the rowing side to help make things easier. Avoid this by actively squeezing your glutes and flexing your obliques on the rowing side.

Eb says: You’ll see plenty of people loading up with weight on the renegade row, and you certainly can load it up—as long as you can keep fighting to keep your hips and shoulders square. But your first obligation in the renegade row is to own and master the plank, staying flat in it at all times—and a single-arm pushup-position plank is challenging even with no weight. So start lighter and dominate that position, then progress from there.