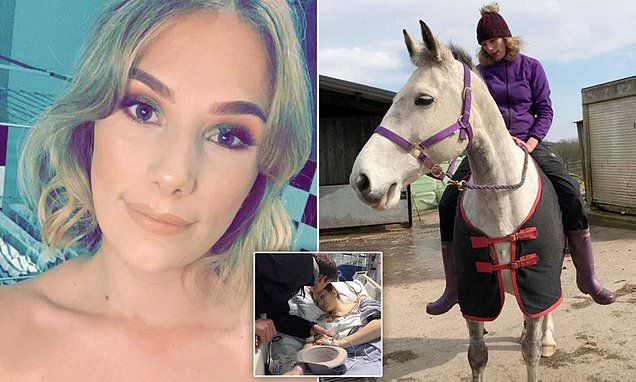 Woman, 23, who ‘could die any minute’ due to her brain ‘slipping into her spinal cord’ writes a heartbreaking bucket list that includes skydiving, meeting James Arthur and going to Disneyland

A young woman who suffers from a condition that could kill her at any minute has written a heartbreaking bucket list.

Jade Davis, 23, of Saltash, Cornwall, was diagnosed with type 1 chiari malformation in March 2017, which causes her brain tissue to extend into her spinal cord.

As a result, Miss Davis loses her vision up to 100 times a day, suffers tremors in both arms and endures seizures.

Miss Davis, who mysteriously stops breathing for a few minutes every night, claims she has been told she could ‘die in her sleep’ any day.

Her family have set up a fundraising page to help her achieve as much as she can in the limited time she has left.

The horse-riding fanatic hopes to raise £2,000 so she can jump out of a plane, go to Disneyland Paris and meet X-Factor star James Arthur. 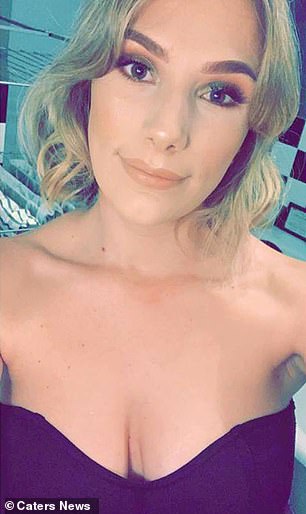 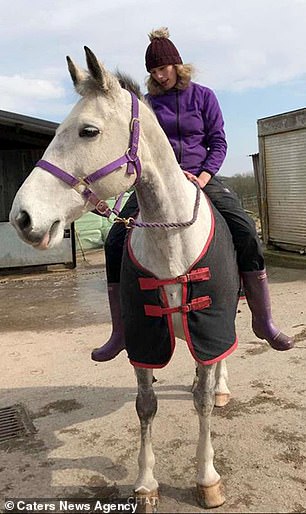 Jade Davis (left) suffers from chiari malformation, which causes her brain tissue to extend into her spinal cord. The horse-riding fanatic (pictured right) has been told her condition could kill her at any minute, which prompted her to write a heartbreaking bucket list 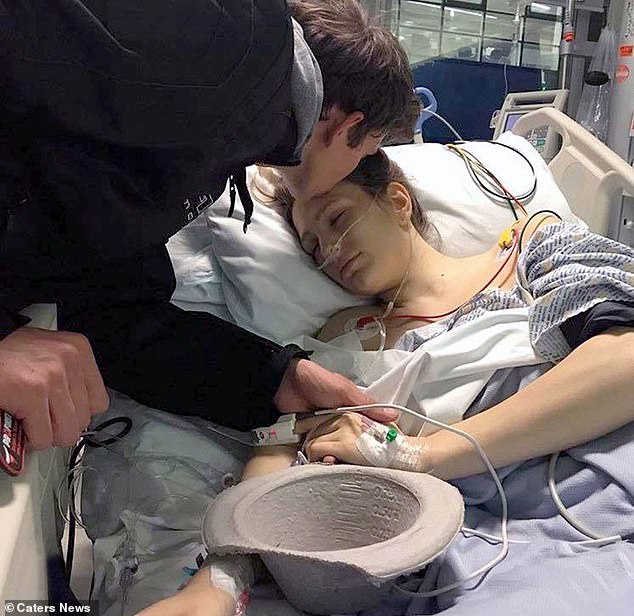 Miss Davis loses her vision up to 100 times a day, suffers tremors in both arms and endures seizures. She is pictured in hospital sharing a tender moment with her brother Tyler

Speaking of her condition, Miss Davis said: ‘Since this diagnosis my whole life has changed, there is so much I can’t do because of it.

‘I can’t do what I love the most and ride horses, I can’t be left on my own, I can’t be trusted in the kitchen.

‘I cant really do things that a normal 23-year-old should be able to do.

‘Every day is a struggle, and I have to put on that brave face and get on with my day.’

Miss Davis is unable to work, cook or even bathe herself and relies on her family to look after her.

‘I get tremors in both my arms, I collapse regularly and have seizures.

‘Every single day my head feels like someone is squeezing it, every day, all day.’ 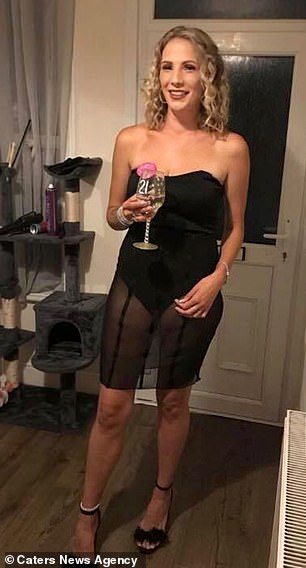 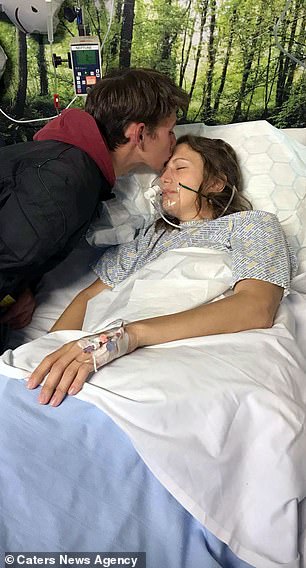 Pictured left before her March 2017 diagnosis, the once-outgoing Miss Davis now relies on her family to look after her. Miss Davis (pictured right in hospital with her brother) stops breathing for a few minutes every night, with doctors warning she may die in her sleep 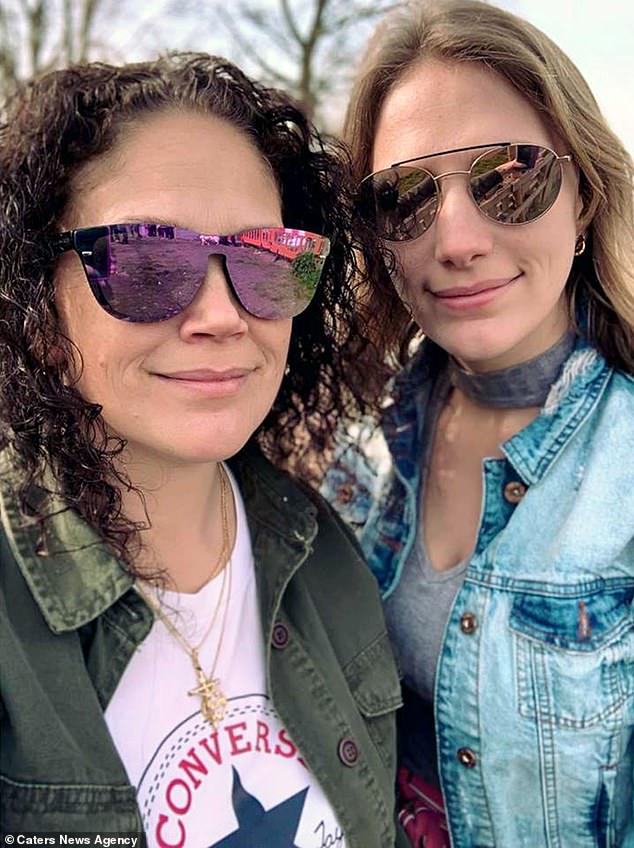 Pictured before her diagnosis with her mother Emma, Miss Davis refuses to accept her condition and that ‘her life is limited’. Desperate to make the most of the time she has left, Miss Davis hopes to visit Thailand, meet Love Island’s Chris Hughes and go to the races

Miss Davis claims she was forced to sell her horse, which she described as her ‘whole world’ and ‘best friend’, due to her condition.

At the time of her diagnosis, Miss Davis was working at a riding school teaching disabled children how to ride and look after horses, which she then had to give up.

‘I still don’t think I’ve accepted I have this condition,’ she said.

‘I think that’s because I don’t want to accept it.

‘I don’t want to accept my life is limited and eventually I will die.

‘I’ve been told I could die in my sleep so to me I don’t want to accept that.’ 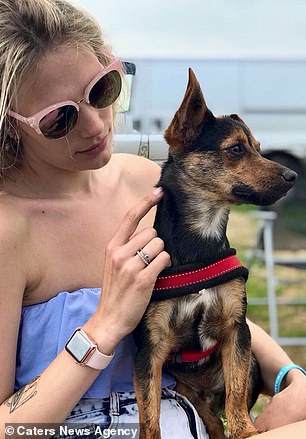 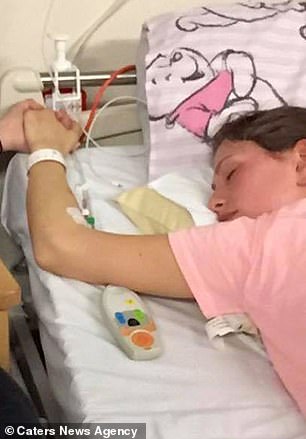 Pictured left before she became ill, Miss Davis claims ‘every day is a struggle’. Seen right in hospital, Miss Davis collapses ‘regularly’, suffers tremors in her arms and endures seizures

Miss Davis’ family have set up fundraising page to help her accomplish her bucket list.

‘After realising Jade’s life is so precious and that at any minute her life could end, we want to work on her bucket list,’ it says.

‘Those who know Jade know she never asks for anything so we decided to instead.

‘We would be grateful of any donations to help us to start ticking things off her list. Finally a massive thank you from all of us.’

Top of Miss Davis’ list is to visit Thailand, but she also hopes to watch an Olympia horse show, meet the equestrian William Fox-Pitt and go to Winter Wonderland.

The horse-riding fanatic also wants to attend the races in Newbury, meet Love Island star Chris Hughes and spend a weekend in London.

WHAT IS CHIARI MALFORMATION?

Chiari malformation occurs when the brain tissue extends into the spinal canal. This can happen if the skull is abnormally small or misshapen, which presses the brain downwards.

The Brain & Spine Foundation in the UK and the National Institute of Neurological Disorders and Stroke in the US both estimate one in every 1,000 people are born with the condition.

It may actually be more common due to not all sufferers developing symptoms.

There are three types of chiari malformation:

Type I – occurs as the skull and brain are growing. Symptoms usually appear in late childhood or early adulthood and include neck pain, poor balance, co-ordination difficulties, numbness, dizziness and impaired vision

Type II – is present at birth and related to spina bifida. Occurs when more of the brain tissue extends into the spinal cord than in Type I. Symptoms may include changes in breathing patterns, swallowing problems, arm weakness and quick downward eye movements

Type III – is present at birth and the rarest form of chiari malformation. Occurs when a portion of the lower part of the brain extends through an abnormal opening in the back of the skull. Has a high mortality rate and can cause brain damage

Although not usually considered life-threatening, chiari malformation may be fatal if a patient’s breathing or swallowing is affected.

It can also lead to hydrocephalus – the build-up of cerebral spinal fluid in the brain – which can be deadly if untreated.

Treatment may not be necessary if symptoms are mild with just regular check-ups and MRI scans being required.

However, surgery can be carried out to remove a small section of bone at the back of the skull. This relieves pressure by giving the brain more room.

The procedure runs the risk of infections, fluid in the brain and spinal cord leaking. Although the operation helps to relieve symptoms it cannot cure nerve damage that has already occurred.