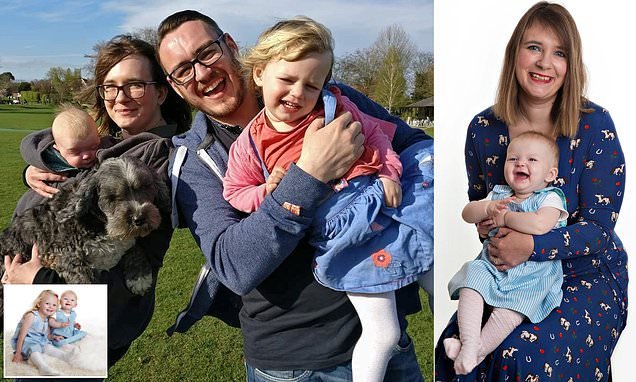 A woman who was told she would not be able to have children because of a medical condition managed to give birth twice.

Hannah Carpenter, 35, from Ipswich, Suffolk, spent a year trying to have a baby with her 38-year-old husband Michael.

After their attempts to start a family failed, doctors said she had polycystic ovarian syndrome, which meant her odds of conceiving naturally were slim.

The couple persevered for eight years, attempting an array of expensive procedures, including artificial insemination and four rounds of IVF.

After the long-running battle – which included one devastating miscarriage – the pair had accepted they would never have their own child.

But Mrs Carpenter was gobsmacked after she joined the gym to lose weight, and a few months later, discovered she was expecting a baby.

And just when the couple thought they couldn’t be any happier, they found out they would be having a second daughter.

Mrs Carpenter said she and her husband feel ‘so lucky’ to have Nancy and Dorothy, now aged three and one, respectively. 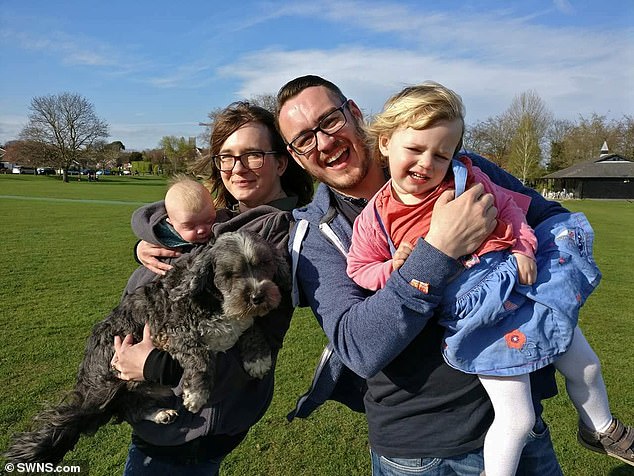 Hannah Carpenter, 35, spent a year trying to have a baby with her 38-year-old husband Michael before she was diagnosed with polycystic ovarian syndrome (pictured with their daughters Nancy, three, and Dorothy, one)

She said: ‘A lot of people take for granted that they can have children when they want to. I never imagined that I might not be able to.

‘I always appreciate things and know how lucky I am to have them both. Sometimes, I sit and look at them and still can’t believe it.’

Speaking about her pregnancies, Mrs Carpenter, who works for an insurance broker, said: ‘The first time I just couldn’t believe it.

‘I had been talking with a friend because I had one month of normal cycles and the next month it had stopped.

‘She asked if I was pregnant and I said “God no”. She said I should do a test just to be on the safe side.

‘The next day I did the test. It changed straight away. I just sat there thinking, “Oh my God, oh my god”.

She added: ‘I went and told my husband and he was in shock as well. He said, “It can’t be right”.’

Mrs Carpenter, who married dock crane operator Michael in 2006, then rushed to see her GP, who confirmed the good news. 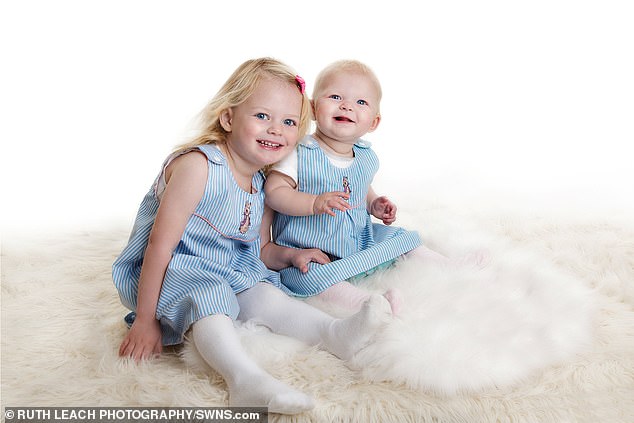 Mrs Carpenter said she and her husband feel ‘so lucky’ to have Nancy and Dorothy, now aged three and one, respectively 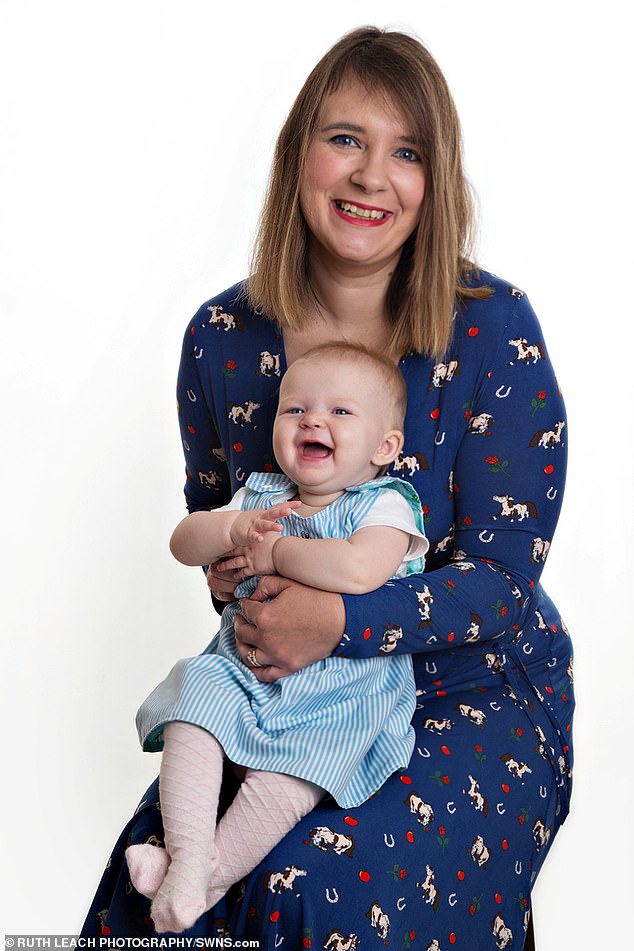 Mrs Carpenter was gobsmacked after she joined the gym to lose weight, and a few months later, discovered she was expecting a baby – after years of failed attempts (with Dorothy)

The condition is marked by chronic ovarian cysts, which are fluid-filled sacs that can form if a follicle fails to deposit an egg.

While any woman can get ovarian cysts, those with PCOS also have elevated levels of the male hormone, androgen.

Scientists do not know what causes this endocrine abnormality, but it often coincides with obesity and insulin resistance.

Yet, like many aspects of PCOS, obesity contribute to the development of PCOS, or the relationship may go in the opposite direction, such that PCOS causes weight gain.

She added: ‘I spent a fortune on pregnancy tests every week, just to make sure something was there.

‘I just kept having to pinch my self. At the time, I was scared that something was going to go wrong. It seemed too good to be true.’

The couple returned from their honeymoon in Egypt more than a decade ago and decided to try for a baby.

After a year of no luck, Mrs Carpenter was then diagnosed with PCOS, a condition which strikes up to 10 per cent of women.

Many women with the condition have difficulty conceiving a child because it can interfere with ovulation, causing irregular or nonexistent periods.

The couple were told they would have to ‘go down the fertility treatment route’.

First off, they tried artificial insemination before using medication to stimulate her ovaries. Neither helped.

When that proved futile, they went through four rounds of IVF treatment. Although one of these proved successful, Mrs Carpenter suffered a miscarriage. 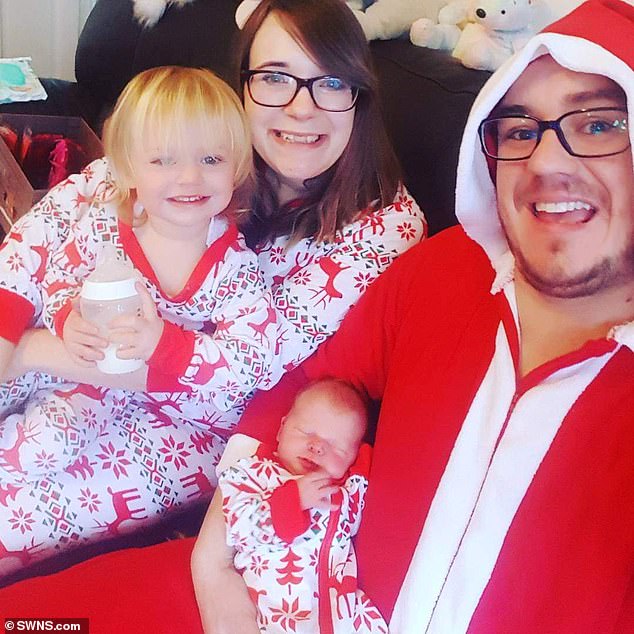 Mrs Carpenter said an endocrinologist told her that her weight loss was probably the reason she had conceived (pictured at Christmas with husband Michael, Nancy and Dorothy) 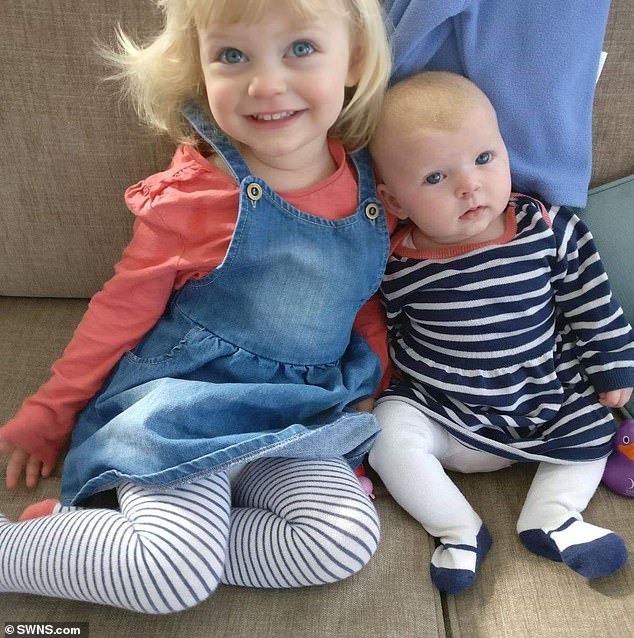 The couple’s story came to light after her gym nominated her for its ‘Inspirational Member of the Year’ award, which she won (pictured Nancy and Dorothy)

She said: ‘We were devastated to be honest. We got a little glimmer of hope. For that to be taken away a few weeks later, it just seemed so cruel.

‘I remember crying to my mum and dad saying I just didn’t understand how it was fair.’

By this point, the pair had all but given up on the idea they would ever be able to start a family.

Mrs Carpenter said: ‘We thought it was just not going to happen. We’ll just have to be happy how we are.

‘I joined the gym to lose weight, and at the time I didn’t think anything of it. I’d lost weight in the past and it hadn’t made any difference.’

After a few months at the gym, Mrs Carpenter had dropped from around 14st 7lb to 10st 7lb.

In May 2015, she found out she was almost two months pregnant, and the following January, gave birth to her first daughter Nancy.

Mrs Carpenter said an endocrinologist at Ipswich Hospital told her that her weight loss was probably the reason she had conceived.

‘With PCOS, your hormones are out of balance and losing weight can help them balance it up,’ Mrs Carpenter said. 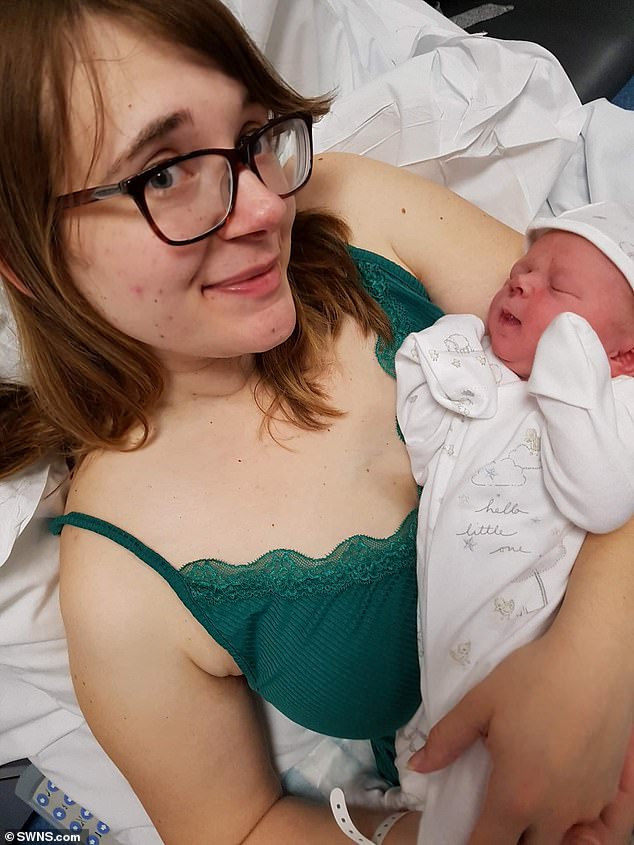 After the long-running battle to have a child, the pair had accepted they would never have their own child (Mrs Carpenter is pictured with Dorothy) 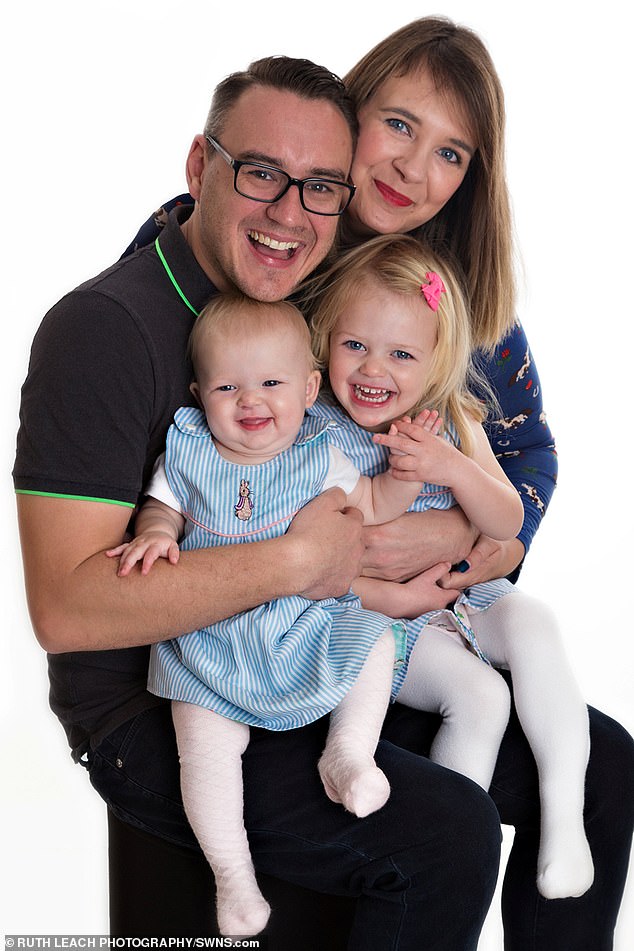 Mrs Carpenter, who works as a relationship manager for an insurance broker, is pictured with her husband and their two children 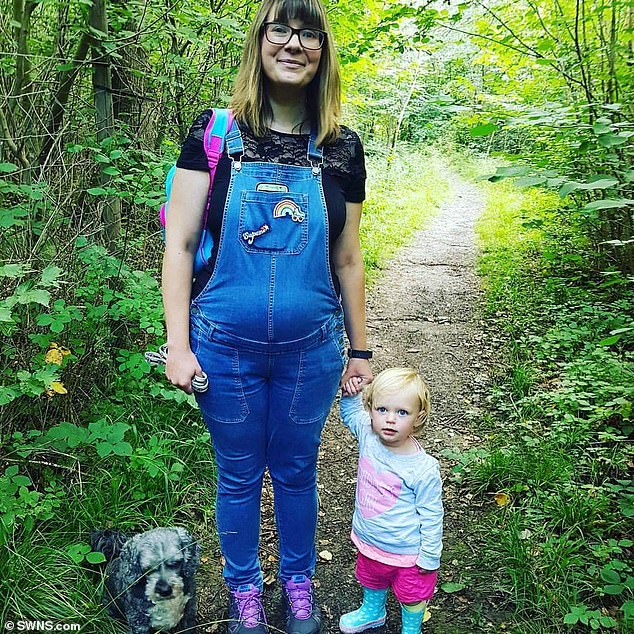 Mrs Carpenter said: ‘It’s difficult to lose weight when you’ve got PCOS but it’s worth trying. I would say to not give up and give it a go’ (pictured with Nancy and her baby bump)

She said: ‘It was still a bit of a shock. After having Nancy, things turned to normal and my cycles stopped again.

‘The doctor said she doubted I would be having more children.’

The couple’s story came to light after her gym nominated her for its ‘Inspirational Member of the Year’ award, which she won.

Mrs Carpenter said she wanted to send a message to other women with PCOS not to give up all hope.

She added: ‘It’s difficult to lose weight when you’ve got PCOS but it’s worth trying. I would say to not give up and give it a go.’ 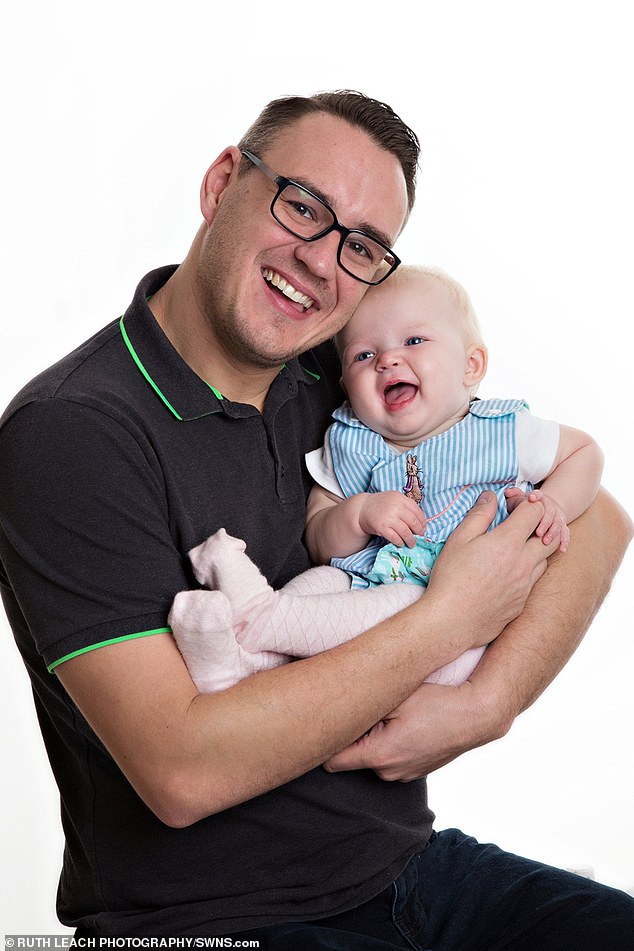 Mr Carpenter, 38, who works as a dock crane operator, is pictured with Dorothy