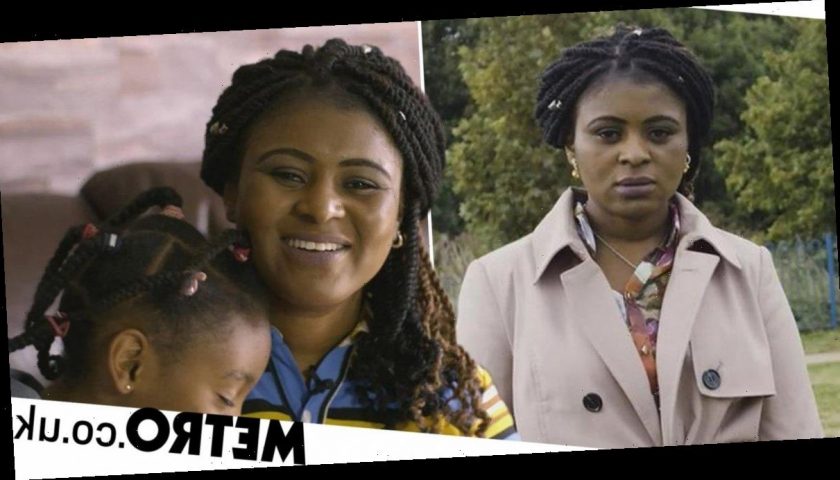 Elizabeth Amoaa has a rare condition that means she was born with two vaginas, two cervixes and two wombs.

But she had no idea for most of her life, only finding out five years after her daughter was born.

In 2015, the 36-year-old was diagnosed with uterus didelphys – a congenital abnormality that occurs when two smaller tubes in a female fetus fail to fuse into a single uterus, instead growing into two separate structures.

She had previously been diagnosed with uterine fibroids and doctors told her she was infertile so when she gave birth to Rashley, now nine, she knew she was a miracle baby.

Throughout her pregnancy, her double womb caused problems but neither Elizabeth or her doctors realised it was there.

Elizabeth, who is originally from Ghana, but moved to the UK from France in 2003, said: ‘In 2008 when I was diagnosed with uterine fibroids, I was told that conceiving was going to be very difficult for me.

‘They told me I was actually infertile, so when I fell pregnant it was a huge surprise.

‘It was a challenging pregnancy, I was bleeding throughout, fainting and feeling tired.

‘They actually thought it was ectopic pregnancy as they didn’t know I have a double womb, and nor did I.

‘I would go to have a scan, which I had to do frequently because of my fibroids, and one minute they would see the baby is in the womb, then the next they could not find the baby.

‘Sometimes they were scanning the wrong womb, I had 20 scans and no-one pointed out I had a double womb – because it’s so rare they weren’t looking out for it.’

The problems led doctors to suggest Elizabeth should have a termination but she decided to wait and see.

She added: ‘They’d say “We cannot see the baby, maybe the fibroids are hiding the baby” and persisted in saying I should have a termination, but my belly was growing and I realized “actually it’s a baby” and I was determined to carry it to birth.

‘The day my daughter was born was a miracle because during the pregnancy it didn’t feel real.’

Eventually, an MRI scan in 2015 revealed that she actually had two wombs.

Elizabeth said: ‘It was kind of a shock, you want answers to your health but that wasn’t what I was expecting.

‘It was new, I had never heard of anyone born with a double womb, then in 2016 they did keyhole surgery and found I also had two cervixes and two vaginas.’

The surgery also revealed that Elizabeth had stage 5 endometriosis – a painful disorder where uterine tissue grows outside the uterus – on her bladder.

Elizabeth fell pregnant again in 2017 but had a so-called ‘silent miscarriage’ – a miscarriage without bleeding – at four months and had to have a medical abortion and evacuation of the womb to remove the fetus.

The experience inspired her to share her medical history with her daughter.

She said: ‘When I got pregnant I told my daughter “Mommy is pregnant again”, but she was asking me “Why are you always in the hospital?”

‘It was only when I lost the baby and she saw me crying and that I said “Mommy has two wombs”. We had a scan for her last year and she’s fine.’

After her miscarriage, Elizabeth set up Speciallady, an organization dedicated to educating women and young girls on gynaecological conditions and menstrual hygiene.

She said: ‘I always say that Speciallady is my second baby. I want to be the voice of the voiceless for every woman out there who is going through symptoms like what I went through.

‘My condition means that I am high risk of cervical cancer or ovarian cancer, so I decided I wanted to live out my dreams.’

She also travels back to Ghana to work with women where talk of gynaecological issues can still be taboo.

She said: ‘As an African woman, a lot of mothers die needlessly or people think these conditions are witchcraft.

‘I’m now seeking Government agencies in Ghana to work with me now, I take sanitary towels and medical essentials in and talk to them about my experiences, and the response has been amazing.

‘These conditions affect girls as young as nine or ten years old, and they keep it to themselves. And by the time they realize what’s going on, it can be too late.

‘Women shouldn’t keep quiet. So my main focus is giving women that courage and that motivation they need for them to come out about their condition.

Don’t be quiet, don’t keep it to yourself. Don’t feel like you’re the only one that’s suffering. There are so many women out there in the same position.’