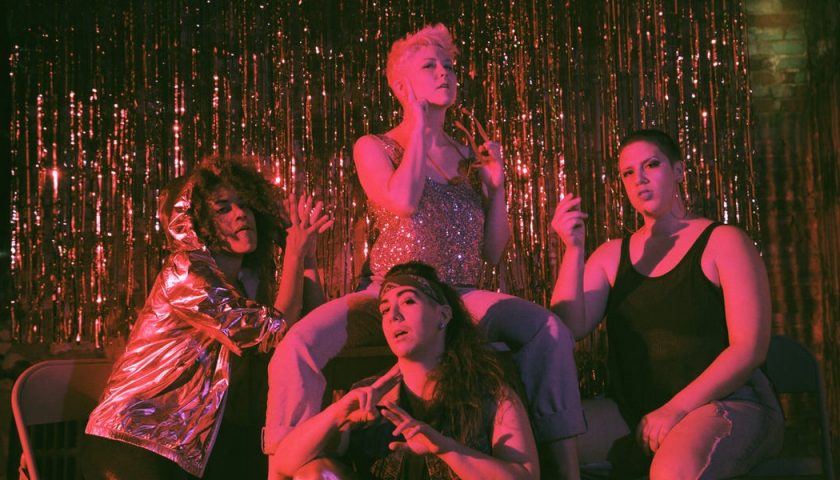 Like most New Yorkers cramming the subways and sidewalks, Mahx Capacity, a 33-year-old with a faux hawk, curly side bangs, and a septum piercing, works a 9-to-5 job.

Capacity, who uses uses they/them pronouns, co-founded the company in 2015 with two colleagues, as an extension of their existing dance company the AO Movement Collective, to carve out space for new voices, and a touch of creativity, in a space historically dominated by heterosexual white men directing low-fi sex stories with similar formats.

Now, six years after releasing their debut, "The O Project," Capacity and AORTA films are proving that it can.

They spotlight diverse body types in the films and use choreography to show the beauty behind them which, as a self-identified fat person, is important to Capacity.

Growing up in the 90s, Capacity is also heavily influenced by sci-fi movies, and other films with a 90s sheen.

Before filming, Capacity has in-depth discussions with the on-screen talent about their turn-ons and consent

Given the experimental nature of Capacity's films, they stressed the importance of collaborating with the people they cast in their films.

"In terms of what makes us different, I think we are very much performer-led," Capacity said. "We work really collaboratively with performers to build the themes," rather than Capacity or other directors driving the entire vision.

"I was like, 'This is a fantasy. Let's make this happen. This sounds wonderful,'" Capacity said.

They said that if a performer wants to explore a kink or fetish for the first time during filming, they'll pair that performer with one who has more experience in that area and let the two feed off of each other.

"I love getting to work with the performers and I love partnering in this way where at the end of the day, we're building something that neither of us could build alone," Capacity said. "It's my job to sort of pull this incredible performance out of them, and it's their job to sort of pull the choreographic intent out of me."

Capacity also has in-depth conversations about consent and boundaries with every performer they cast to ensure everyone feels comfortable throughout the filming process. According to Capacity, consent conversations begin months before a film is even shot, and are often done over Skype.

Capacity said their goal in the coming years is to make AORTA Films profitable enough for them to quit their day job and hire full-time staffers.

Occasionally, Capacity to act in some of their films.

At first, that was not the plan: Capacity had no intention of being in front of the cameras, concerned that it would be seen as a vanity project. But they said, to their surprise, the experience has been an empowering one. Once they started directing, Capacity's confidence grew, and being on screen didn't seem so outlandish.

They realized, as a fat person and performer: "I can do something by being visible here that might be powerful or helpful to other people."

When Capacity first saw their body on film, they were worried they'd feel embarrassed or self-conscious, but instead, "it was amazing to see my own body on film, feel fine about it, and not feel the weight of everything we've been socialized to feel around fat bodies."