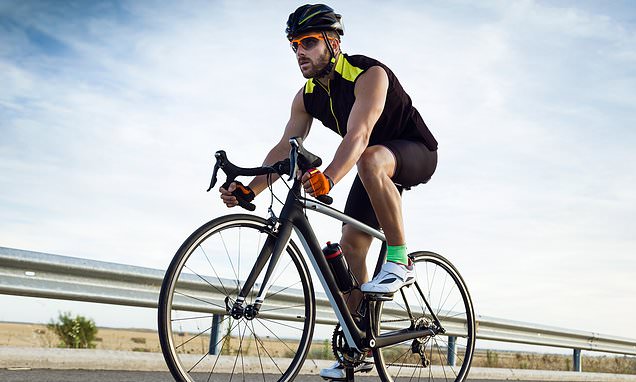 Warning for ‘part-time’ weekend exercisers: Pushing yourself extra hard over short periods could do ‘more harm than good’

It is bad news for those who pride themselves on their ferocious pedalling rate.

Weekend cyclists dubbed the ‘middle-aged men in lycra’, or MAMILS, should slow down if they don’t want to burn out.

A study has found amateur cyclists who try to cycle as fast as the professionals place their body under significant strain.

Those who try to copy Sir Chris Hoy, pedalling rapidly at 90 times a minute, see their heart rate rise by 15 per cent and starve their muscles of oxygen. 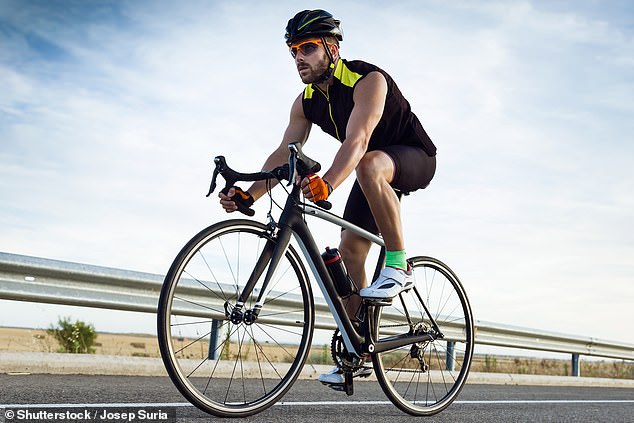 King’s College data: A study has found amateur cyclists who try to cycle as fast as the professionals place their body under significant strain

Elite cyclists can cope with fast spinning of the pedals, as their training may mean they use their muscles more efficiently.

But for the amateurs among us, who may end up using extra muscles to stop falling off the seat, it is an inefficient way to ride a bike which could mean having to stop for a humiliating breather.

He said: ‘The main message of this study is for amateur cyclists not to force themselves beyond what feels natural.

‘In most cases the cyclists you see wobbling on the bicycle seat, spinning their legs very rapidly, have reached the level where they are just wasting energy.

‘If they are competing in a road race, or going for a weekend cycle ride and doing this, they could well end up having to give up.’ Researchers asked nine people, ranging from triatheletes to unfit sedentary types, to ride an exercise bike at what was for them a moderate intensity.

As they pedalled between 40 and 90 times a minute, their heart rate was measured, along with the oxygen used by their thigh and buttock muscles and their oxygen uptake. Amateur: Elite cyclists can cope with fast spinning of the pedals, as their training may mean they use their muscles more efficiently

Their heart rate rose by 15 per cent and they took in more oxygen.

Light rays which bounce off oxygenated blood showed less oxygen was available to their thigh muscles.

In other words, they were having to work much harder than usual.

The study, published in the International Journal of Sports Medicine, suggests more pedal revolutions are not a good idea for amateur cyclists unless they are travelling slowly on a flat road.

Elite cyclists may have naturally better muscles or have learned over years of training to use only those they need, which is why pedalling faster is efficient for them.

However amateur cyclists are likely to end up wobbling when they try to match their Olympic heroes.

This could engage back and hip muscles just to stay upright, meaning less oxygen reaches the important pedalling thigh muscles.

Dr Formenti, a physiologist and sports scientist, said: ‘Pedalling at cadence greater than 90 revolutions per minute is advantageous for professional cyclists, but appears inefficient for recreational cyclists.’

SHOULD YOU DRINK BEETROOT JUICE BEFORE EXERCISE?

Drinking beetroot juice before exercise could take years off your brain, research suggested in April 2017.

Combining the drink with exercise strengthens certain regions of the brain, making it appear more youthful and potentially preventing the organ’s decline, a study found.

This finding could help people who are at risk of brain deterioration to remain functionally independent, such as those with a family history of dementia, according to the researchers.

Drinking beetroot juice before exercise could take years off your brain

Beetroot juice’s power likely lies in its nitric-oxide content, with past research suggesting this both increases blood flow to the brain and improves exercise performance.

Study author Professor Jack Rejeski, from Wake Forest University, North Carolina said: ‘Nitric oxide is a really powerful molecule. It goes to the areas of the body which are hypoxic, or needing oxygen, and the brain is a heavy feeder of oxygen in your body.

‘Compared to exercise alone, adding a beetroot juice supplement to exercise resulted in brain connectivity that closely resembles what you see in younger adults.’

The researchers analysed 26 men and women aged 55 and over who did not exercise and had high blood pressure.

Some participants were given beetroot juice one hour before walking for 50 minutes on a treadmill, while others did the same exercise but without the drink. This was repeated three times a week for six weeks.