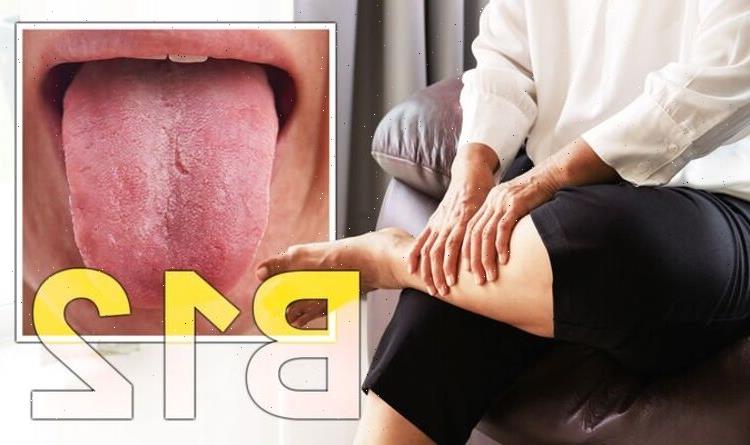 Vitamin B12 is an essential mineral that the body uses to make DNA and produce red blood cells. While a B12 deficiency is most common in older people over the age of 60, anyone who lacks this crucial vitamin in their diet is at a higher risk of developing the long term consequences. There are a number of generic symptoms linked to this type of deficiency, and these are the three most unusual signs that you need more of it in your diet.

Even though vitamin B12 is found in many foods, deficiencies are becoming increasingly common in both the US and the UK, with an estimated six percent of people under the age of 60 known to be lacking in B12.

This figure rises to around 20 percent for those aged 60 or over, and is significantly higher for people who follow vegan diets.

Meat, eggs, fortified foods and dairy products are all key sources of vitamin B12, meaning some people are naturally lacking in it due to their dietary requirements, and there are three key signs that it could be the case for you.

Occasional bouts of this tingling sensation in your hands and feet are generally nothing to worry about, but random and long lasting episodes could be a sign of a B12 deficiency.

When a person’s diet is low on foods rich in vitamin B12, the normal functions of the nervous system can often suffer, causing people to develop nerve conduction problems or even nerve damage.

Medically accredited website Healthline said: “Paresthaesia is a medical term that refers to a burning or pins-and-needles sensation in certain areas of the body, like the hands and feet.

“Many adults and kids who have B12 deficiency report experiencing paresthaesia.”

While prolonged bouts of severe pins and needles could indicate a B12 deficiency, this unusual symptom is also heavily linked to diabetic neuropathy.

This is a type of nerve damage caused by high blood sugar, causing pain and even numbness in some cases.

If you have type 2 diabetes and are taking metformin to manage the condition, you are more likely to be B12 deficient because of the effect the medication can have on the body’s absorption of the vitamin.

According to Healthline, it is recommended that people taking metformin regularly get screened for vitamin B12 deficiency.

Pain in the mouth or tongue

Inflammation, mouth sores and redness can all occur for a number of reasons, and a B12 deficiency is just one of them.

When a B12 deficiency becomes severe, it can lead to anaemia – a condition whereby the body is too low on red blood cells to be able carry enough oxygen to the body’s tissues.

The NHS recognises mouth ulcers and a sore, red tongue as two key symptoms of anaemia, but they can also occur before a person becomes anaemic.

Known as glossitis, inflammation of the tongue will often cause it to:

The small bumps on your tongue known as papillae can also begin to disappear over time when your tongue muscle is damaged, as a result of a B12 deficiency.

Men who are B12 deficient may experience sexual problems, such as erectile dysfunction (ED).

This can happen as a result of increased levels of homocysteine in the body.

A 2021 study of 134 ED patients and 50 healthy patients found that the ED group had a lower median of vitamin B12, and higher median levels of homocysteine.

The results concluded that contrast of B12 to homocysteine levels was even more pronounced in younger participants who took part in the study.

According to Healthline, other symptoms of a B12 deficiency include: