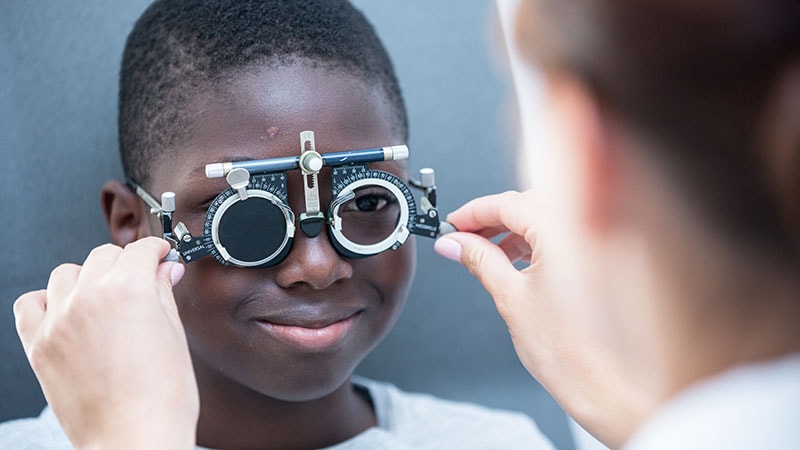 Race, ethnicity, and socioeconomic status are closely associated with visual impairment in adolescents in the United States, researchers have found.

The study showed that adolescents who identified as Black, Mexican-American, of low-income, or as non-US citizens were two to three times more likely than White adolescents to report vision problems and to perform worse on objective tests of visual acuity.

Although disparities in visual impairment with respect to ethnic, racial, and socioeconomic status have been described among adults, little research has explored the adolescent population, according to the researchers, whose findings appear in JAMA Ophthalmology.

“The primary motivation behind trying to figure out exactly when these disparities emerge is that it gives us an opportunity to come up with ideas for interventions that can potentially address them before they before they manifest in a way that they are no longer treatable,” said Isdin Oke, MD, an instructor in ophthalmology at Harvard Medical School, Boston, who led the latest study.

Oke and his colleagues analyzed the records of 2833 children and adolescents aged 12 through 18 years (mean,15.5 years; 49% female) in the National Health and Nutrition Examination Survey. All the participants had a completed visual function questionnaire and had undergone an eye examination. The primary outcomes of the study were subjective (self-reported) poor vision and objective measures of visual function (visual acuity worse than 20/40 in the better-seeing eye).

Black and Mexican-American adolescents were almost three times more likely to suffer poor subjective visual function and twice as likely to have low objective visual acuity than non-Hispanic White youth, according to the researchers.

“I think it’s something that healthcare providers, and even the population as a whole, should be more aware of,” Oke said.

Oke said the findings likely reflect the underlying inequities in access to vision care experienced by these persons.

“There are a lot of opportunities for early intervention, whether it’s through vision screening or improving access to vision services for children and adolescents that can really make a big difference over the long term,” he told Medscape Medical News.

Michael F. Chiang, MD, director of the National Eye Institute at the National Institutes of Health, Bethesda, Maryland, agreed that more steps need to be taken to improve access to vision care for all Americans.

“There are good data showing that we don’t have a sufficient number of eye care providers and health-services clinical researchers who come from backgrounds that are currently underrepresented in medicine and science,” Chiang said. “Therefore, we need to find ways to inspire, recruit, and train a larger number of people to strengthen our vision workforce.”

Other ways to address these gaps in care, Chiang said, include improving understanding of the social determinants of vision health as well as developing ways to improve access to eye care.

“That may include new models of eye care, like telehealth to improve outreach, and will likely need to include what we call implementation science, so clinicians can better adopt these measures,” he said.

Michael Vlessides is a best-selling author and medical journalist in Canmore, Canada.