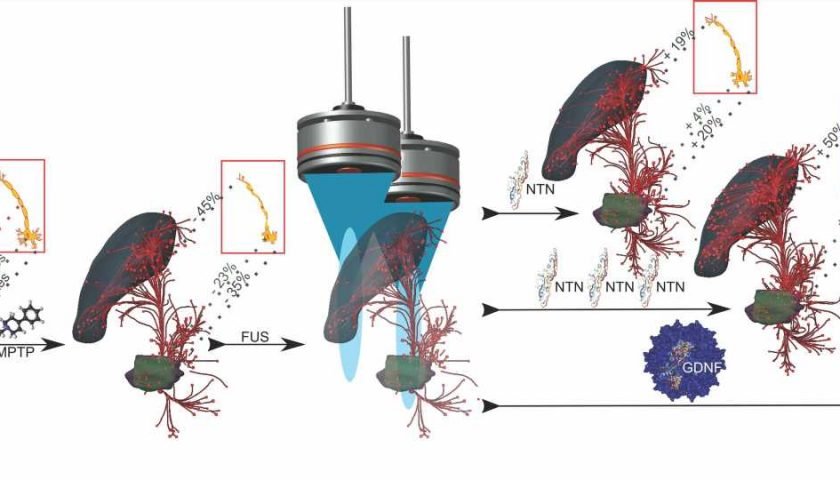 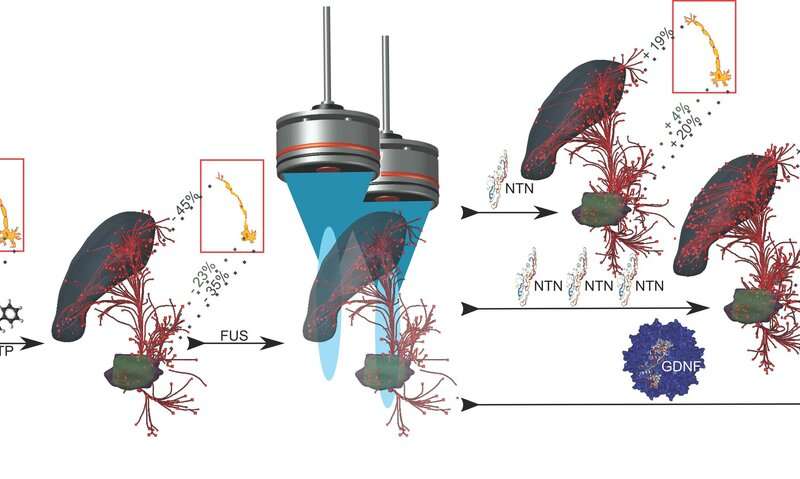 While there are several thousand drugs available to treat a wide range of brain diseases, from depression to schizophrenia, they cannot penetrate the blood-brain barrier (BBB) into the brain. The BBB, which protects the brain from pathogens that may be present in blood, also prevents most drugs from gaining access to the brain functional tissue, the parenchyma, a well-known challenge to the treatment of all brain diseases including neurodegenerative disorders like Parkinson’s disease and Alzheimer’s.

A team led by Elisa Konofagou, Robert and Margaret Hariri Professor of Biomedical Engineering and Professor of Radiology (Physics) at Columbia Engineering, has been developing a novel technique that could open up new ways to facilitate targeted drug delivery into the brain and enable drugs to treat brain diseases more focally. The researchers used transcranial, focused ultrasound and intravenously injected microbubbles into the BBB to make a localized and transient opening that allows drugs to cross through the BBB reversibly and non-invasively. Focusing on Parkinson’s disease, in collaboration with Serge Przedborski’s group in the department of neurology at Columbia University Irving Medical Center, they discovered that protein delivery and gene delivery across the BBB can partly restore the dopaminergic pathways, the neurons in the brain that are affected in early Parkinson’s disease.

“We found both behavioral and anatomical neuronal improvements in the brain,” says Konofagou, who led the study, published online on April 4 by the Journal of Controlled Release, and in print June 10. “This is the first time that anyone has been able to restore a dopaminergic pathway with available drugs at the early stages of Parkinson’s disease. We were able to curb the rapid progression of neurodegeneration while improving the neuronal function. We expect our study will open new therapeutic avenues for the early treatment of central nervous system diseases.”

The team targeted the brain regions involved in early stage Parkinson’s and Alzheimer’s disease, such as the putamen and hippocampus. The tool they developed for the study is a device that uses a neuronavigation system to direct the treatment in real-time. The U.S. FDA has just assigned the team an Investigational Device Exemption (IDE) to use the device in clinical trials to test its safety in Alzheimer’s patients.

“Neurosurgeons use such systems all the time to guide them for neurosurgery,” says Antonios Pouliopoulos, associate research scientist in Konofagou’s lab who worked on the development of the clinical neuronavigation system. “Our group just replaced the surgical instrument with an ultrasound transducer to perform our non-invasive procedure.”

Konofagou’s Ultrasound Elasticity and Imaging Laboratory is the only academic lab in the U.S. to receive FDA approval for ultrasound-assisted, blood-brain-barrier opening. Other groups doing similar research either use nanoparticles to facilitate drug delivery or require MRI to guide the procedure. Konofagou’s approach is MRI-independent and does not require any nanoparticles. 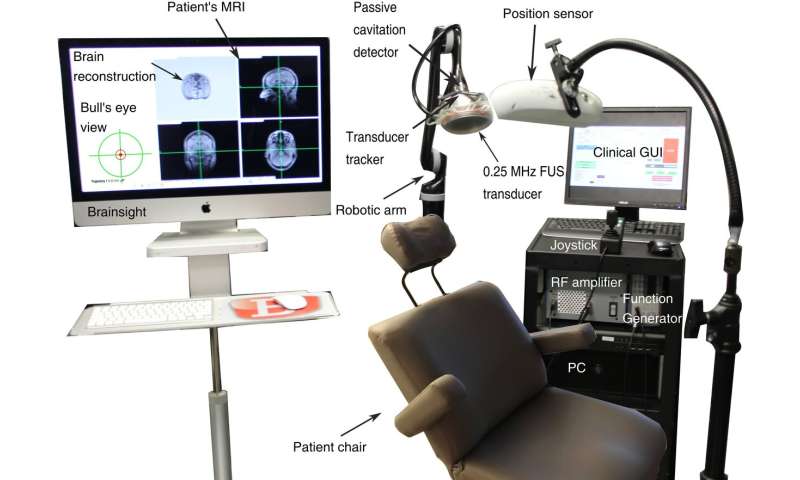 Her device is a single-element transducer that is much smaller, faster, and less expensive than current helmet-shaped, 1024-element transducer systems that use MRI guidance. Because Konofagou’s system is portable, doctors will be able to treat patients anywhere in a hospital and, in the future, even at a patient’s home. Treatment can be completed in less than 30 minutes, compared to three to four hours for MRI-guided therapy, and monitored in real-time, a unique feature of the new device. The cost is 10 times less than the MRI-guided helmet. The first trial with the device will be with Alzheimer’s patients, after which Konofagou plans to work with Parkinson’s patients.

Konafagou recently won a four-year $2.5M NIH grant to use a similar device for deep brain stimulation aiming to unveil the mechanism by which ultrasound excites neurons and to monitor the unveiled mechanism in human subjects. In addition, she will be honored with the 2019 Engineering in Medicine and Biology Society’s Technical Achievement Award in Berlin this July for her “outstanding and pioneering contributions in the field of ultrasound imaging and therapy, and their application and clinical translation to the diagnosis of cardiovascular diseases, tumor diagnosis and treatment as well as brain drug delivery and stimulation.”