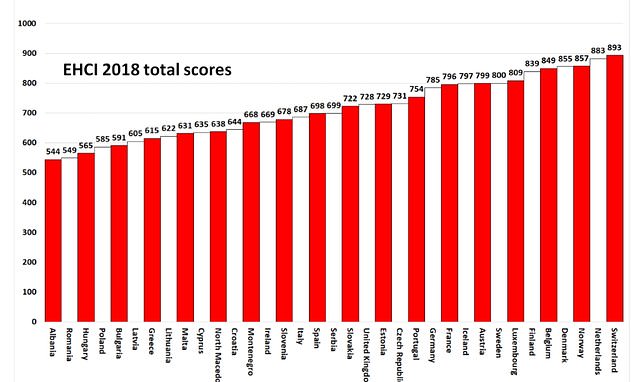 UK healthcare ranks just 16th out of 35 European countries: NHS is ‘on par with Estonia and the Czech Republic due to unacceptable wait times’

The UK has scored 16th in a report assessing the quality of healthcare across 35 European countries.

The report – which looked at 46 indicators, including infant mortality, suicide rates and time waiting for treatment – ranked the UK below Czech Republic and Estonia, which scored 14th and 15th, respectively.

Only Ireland performed worse than the UK when it came to ‘accessibility’, such as seeing a GP the same day or the time spent waiting for major surgery.

But the UK was second only to Norway when it came to the best preventative healthcare, such as vaccinations and stop smoking interventions.

Switzerland came out on top overall, marking the first time the Netherlands has been beaten in a decade. 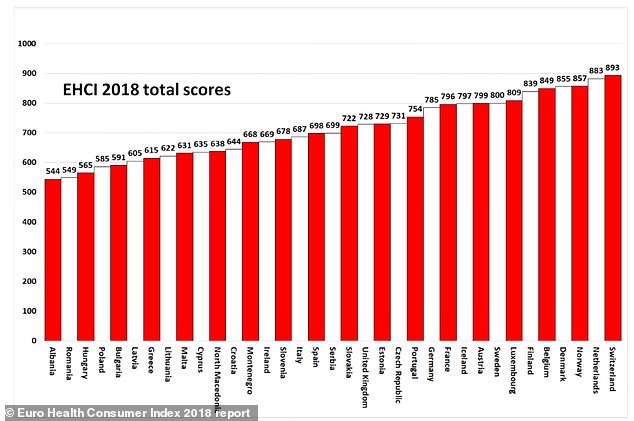 The UK was ranked 16th in a report assessing the quality of healthcare across 35 European countries. Out of a possible 1,000 points – representing optimal care – the UK scored 728. Switzerland came out on top with 893 points and Albania came last with a mere 544 points

It was written by Professor Arne Björnberg and Ann Yung Phang, who are executive chairman and project manager, respectively.

They analysed healthcare statistics from each country, before scoring each one points out of a maximum 1,000.

But since the report began in 2005, the UK has never made it into the top ten due to ‘poor accessibility and an autocratic top-down management culture’.

The NHS started investing millions on reducing waiting times for treatment in 2008.

And it introduced a maximum wait time of 18 weeks between diagnosis and treatment.

And the UK is now ‘on par with Estonia and the Czech Republic in the middle of the field’. 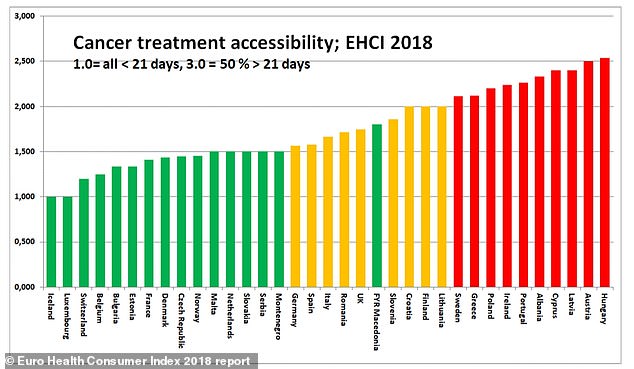 Cancer treatment accessibility scored green if essentially ‘everybody receives treatment within three weeks’ and red if ‘everybody waits more than three weeks’. Iceland came out on top and Hungary last. Like with the overall ranking, the UK scored close to the middle

WHAT WERE THE FULL RANKINGS?

Switzerland, which has ‘enjoyed a solid reputation for excellence in healthcare for a long time’, scored highest overall, with 893 points.

It was also the only country to score ‘all green’ on the traffic-light system assessing waiting times to be treated.

When it came to suicide rates and waiting times for paediatric psychiatry, the Netherlands dropped from green scores to red, with Switzerland taking the top spot.

‘Switzerland has for a long time had a reputation for having an excellent, although expensive, healthcare system,’ the authors wrote.

‘And it therefore comes as no surprise that rewarding clinical excellence results in a prominent position.’

The worst healthcare in Europe was awarded to Albania, with 544 points. The authors described the country as having ‘very limited healthcare resources’.

But the report acknowledged healthcare is easy to access in the Balkans region, with waiting times being acceptable.

Its ministry said: ‘Albanians are a hardy lot, who only go to the doctor when carried there.’

Overall, the authors claim healthcare is improving across Europe despite budget cuts.

Survival rates in everything from heart disease to cancer are on the rise, despite obesity and junk food consumption also growing, they claim.

Infant mortality has also improved across the board, with 24 countries having less than three deaths per 1,000 births.

Tightening of the ‘800 club’s’ criteria meant only eight fit the bill last year, but three more countries scored between 796 and 799.

‘Infant mortality and survival rates of heart disease, stroke, and cancer are all moving in the right direction,’ Arne Bjornberg, chair of the Health Consumer Powerhouse, said.

‘Patient choice and involvement are developing.’

But the think tank’s founder Johan Hjertqvist added most citizens still cannot move across borders for treatment despite EU legislation permitting it.

And a third of Europeans live in countries with poor healthcare access. 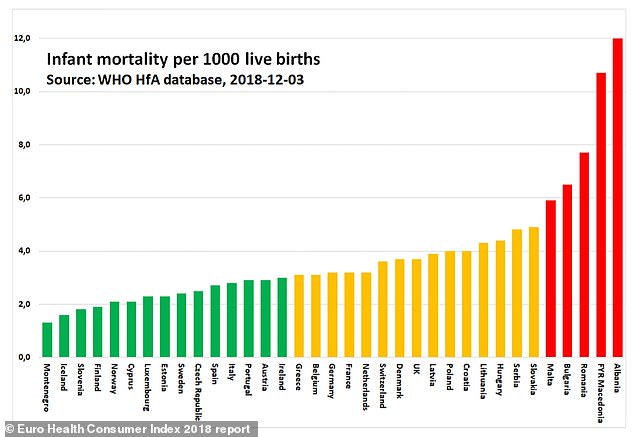 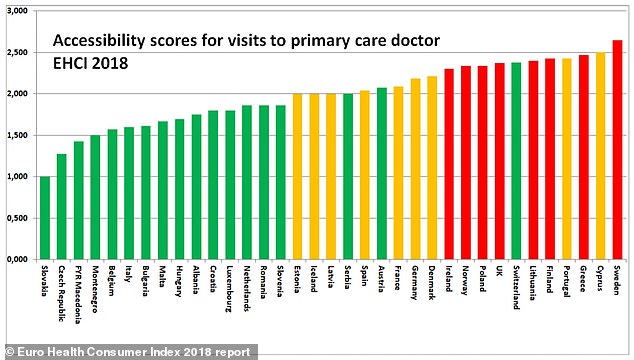 Countries scored green for visits to their primary-care doctor if they answered ‘yes’ to being able to see their GP the same day with or without an appointment. Red was ‘normally not’