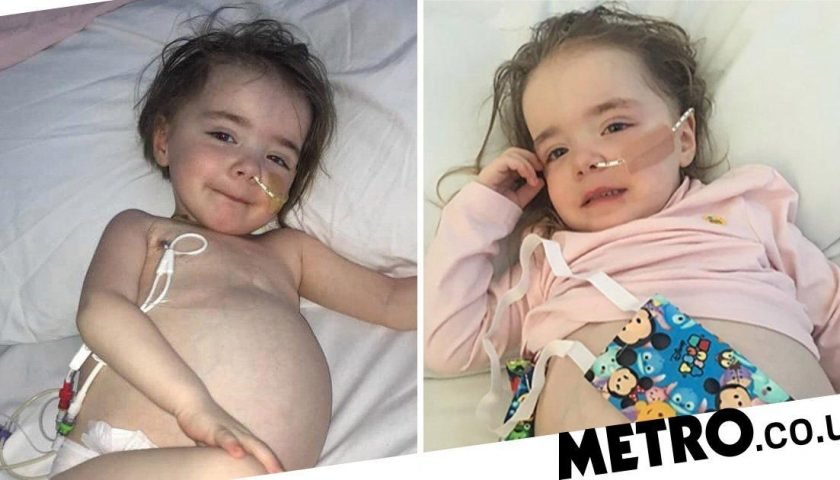 Two weeks later she was diagnosed with stage three adrenal carcinoma, a rare disease caused by cancerous cells in the adrenal – or hormone – glands.

Shannon said: ‘She looked like she was pregnant. I was getting more and more concerned.

‘Because of her hormone changes, they thought she had a hormone imbalance.

‘It was such a shock when we found out. It’s just begun to sink in because she’s so young and she’s such a bright child.

‘She had always been absolutely healthy. She was like any other two-year-old.

‘You never expect it to happen to your own child.

‘Now that it’s happened, I feel powerless. I wish there was a way I could take it away from her and fight it.

Cleo must undergo more chemotherapy before having an operation to remove the tumour and her adrenal gland.

Even after surgery, the toddler’s chances of survival remain low, at just 25% to 35%, and there’s a chance the tumour may return.

The family has set up a Facebook page to share Cleo’s battle against cancer, as well as a fundraiser to help with the cost of their regular journeys from Blackpool to Manchester Children’s Hospital.

‘All we can do is remain positive and happy. It keeps a smile on Cleo’s face,’ says Shannon. ‘That’s what we want for the whole time she’s being treated: for her to keep smiling.

‘We just say to ourselves that this is just another chapter of her life.

‘Cleo is still smiling through every single day. She still laughs and jokes, and the hospital has been amazing – she’s been having fun in their playroom. She’s a little warrior.

‘On April 2 she started chemotherapy and she was on that for four days. It was draining. The chemo started making her ill and she’s had to have a blood transfusion and injections of so many different medications.

‘She’s gone from being a normal happy child to a really poorly little thing and it’s really difficult to see.

‘I’m sat there every day with her just watching her go down and down. She picks up infections really easily.

‘I’m trying as hard as I can to stay positive and talk about it because when I talk about it it’s letting it out. But when I’m on my own my mind goes into overdrive and I’m just constantly crying.

‘You start to think the worst once you’re on your own.

‘When I see her smiling when I’m with her it makes everything much easier.

‘Ryan rings me every day and when he asked me about Cleo he also makes sure I’m eating and everything. He’s my rock at the minute.

Cleo is bubbly and independent. She’s really advanced for her age.

‘Because of how rare her cancer is, the survival rate is 25 to 35%. But she’s a great child and a great little fighter. She’s been so strong in hospital.’

MORE: Bridesmaid cuts off long luscious hair for cancer patients but bride says the look will ruin the wedding

MORE: Toddler gets tongue reduction to help him talk and breathe