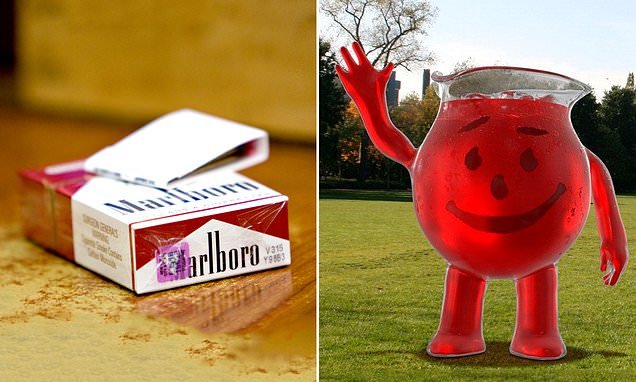 Big Tobacco companies bought up sugary drink companies – and they used the same tactics that made cigarettes appeal to children to get them to want soda and juice, a new study reveals.

The same additives used in cigarettes to control their color and flavor work in beverages, tobacco executives realized.

The study serves as evidence that Big Tobacco plays an out-sized role in not one but two of the biggest health epidemics in the US: smoking and obesity. 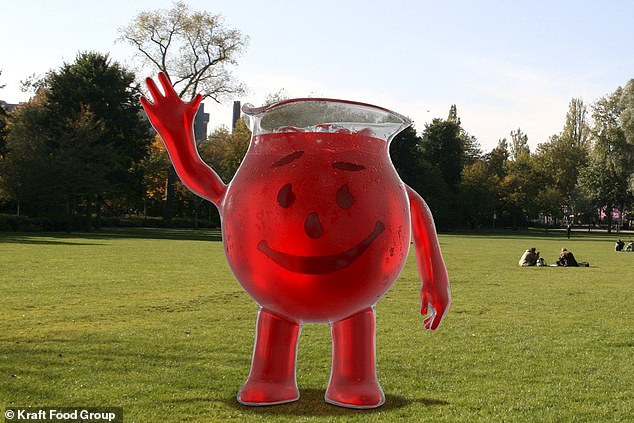 Big Tobacco companies RJ Reynolds and Philip Morris bought up sweet drink companies, realizing they could use flavor, color and mascot strategies from their cigarettes to hook kids on sugary beverages like Kool-Aid

Growing scientific evidence suggests that the earlier children start drinking sugary beverages, the more likely they are to become overweight and/or diabetic.

Over 18 percent of American youth are estimated to be obese, raising their risks of chronic disease and premature death.

That isn’t much less than the 29 percent of high school seniors that reported smoking daily in 1976.

And new research suggests that might not be entirely a coincidence.

‘Once you see the world through the eyes of a tobacco executive you start to see that a sweet beverage is not that different from a cigarette,’ explains lead study author Dr Laura Schmidt, a UCSF health policy professor.

‘It’s very few ingredients, they’re highly processed and there can be a lot of variability in the product lines that comes down to colors and flavors.

‘And who likes those? Little kids.’

Philip Morris and RJ Reynolds realized that the substances they used to make cigarettes appeal to kids and adults alike would also enhance drinks.

So the tobacco giants bought up food and beverage companies and started experimenting with adding sugar and colors (just like in cigarettes) to various beverages.

RJ Reynolds purchased Hawaiian Punch and market tested the red drink as a cocktail mixer for moms. But it didn’t go over that well.

So, they tried testing it on children, too, to see if it was the right sweetness. Children were much bigger fans, so the company switched gears.

And, conveniently, the company had already been using a cartoon character to advertise its Camel cigarettes – ‘building brand loyalty from a young age,’ says Dr Schmidt – so it just retooled that for the punch line.

Well-versed in ‘aspirational marketing,’ says Dr Schmidt, Philip Morris dyed the the juice bright red and paired it with the Kool-Aid Man mascot.

‘It’s insidious they’re inserting themselves into the minds of the children. They get into your head and think, “what do they want to become?”‘ explains Dr Schmidt.

‘Kids want to be like the the Kool-Aid Man. He creates chaos and the parents are running around after him.

‘It’s children’s aspiration to be big and important and to scare all the adults.’

Later, market testing would teach the tobacco giant that kids really, really like blue, so it went on to make a blue version of its popular punch, plus pick up Tang and Capri Sun.

‘The industry claims that these tobacco-inspired marketing strategies are not actually targeting children and should be excluded from these industry-led agreements,’ said Schmidt.

‘But the evidence cited in our research shows that these product lines and marketing techniques were specifically designed for and tested on children.’

And e-cigarettes companies are only continuing the destructive tradition, Dr Schmidt says.

‘That’s the current tobacco industry strategy to market e-cigs to children and teens,’ she says.

‘That’s why you can buy e-cigs in bubble gum flavor, chicken and waffles…those are probably targeting African American teens or hipsters.’