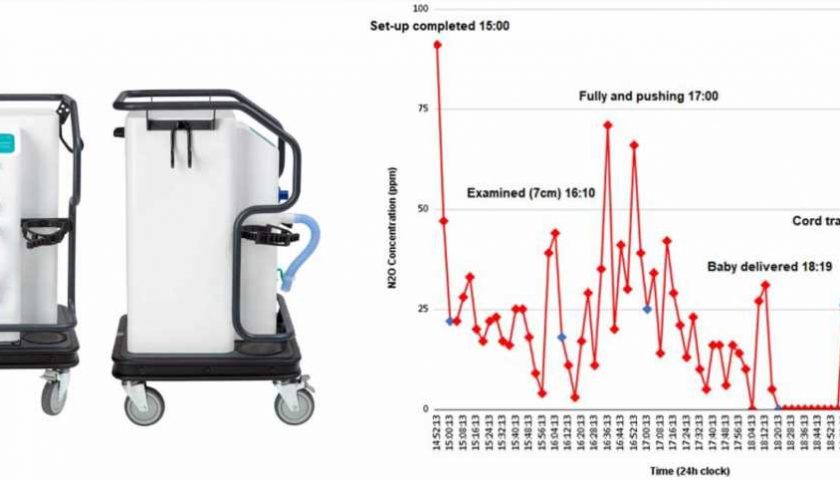 In a case report published in Anaesthesia Reports, a 35-year-old woman who is herself an anesthetist describes her own use of special equipment to recover and break down nitrous oxide used for pain relief during her labor, saying it is mostly easy to use. She also discusses the positive feeling of reducing harm to the environment.

Nitrous oxide is a greenhouse gas that has global warming potential some 265 times higher than the equivalent mass of carbon dioxide. Nitrous oxide is the most common painkiller used during labor, and thus any intervention that reduces its release has the potential to substantially reduce its impact on the environment.

Consultant Anesthetist Dr. Fiona Martin of Salford Royal Hospital, Salford, U.K., used a nitrous oxide cracking device while in labor, prior to giving birth to a healthy baby girl at St Mary’s Hospital, Wythenshawe, part of Manchester University NHS Foundation Trust, in October 2021. The device helped to collect (“scavenge”) and break down nitrous oxide that she breathed out via a facemask, to prevent it being released into the atmosphere.

Dr. Martin says, “As a profession, we are all aware of the importance of reducing the environmental impacts of anesthetic agents. Although I admit this was not at the forefront of my mind on the day in question, I was pleased to think that by using the cracking equipment I might help to reduce greenhouse gas emissions associated with nitrous oxide use in labor.”

During her labor she used a birthing pool, and noted that the most difficult moments to maintain a tight facemask seal (thereby maximizing the amount of nitrous oxide scavenged) came when exiting the pool and changing positions during her labor—lying on her side made it more difficult, but when lying in the hands and knees in the “prone” position, common during labor, It became easier as the weight of her head pressing down on the mask made the seal better. She adds: “Overall, I found the experience of using the cracking equipment to be very positive, and I am pleased to note the drop in ambient nitrous oxide once I made the switch from the usual device that provides the gas during labor.”

The case report notes that although the ambient nitrous oxide levels were low, it remained detectable throughout labor, despite Dr. Martin’s expertise in facemask use as a result of her professional training. The authors say, “Increases in nitrous oxide concentrations appeared to be associated with events that were uncomfortable or presented a challenge to maintaining an effective facemask seal, such as during examinations. This suggests that the impact of cracking technology is dependent not only on the efficacy of the technology itself, but on finding ways to help patients to use it effectively. This may, for example, involve education on facemask use at antenatal classes, feedback and support from midwives during labor, or considering whether a facemask is the most suitable device for every patient in every context.”