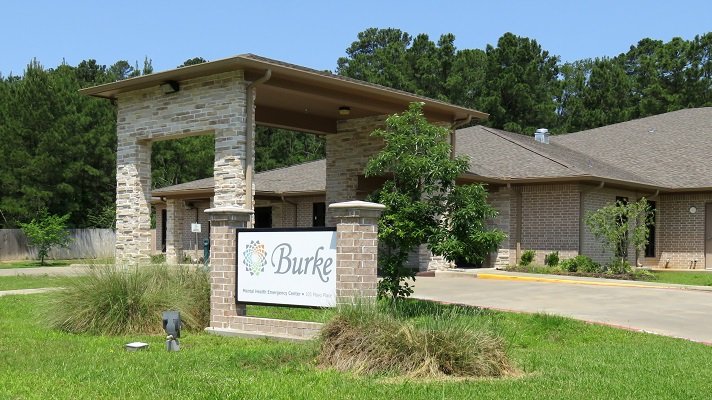 In the early 2000s, the state of Texas was in the midst of a widely recognized, multi-decade crisis from lack of mental health services for people in need.

Psychiatric facilities were above capacity, leaving patients in mental health emergencies with either jail or emergency rooms as their only options. The ones correctly identified as in need of emergency care were taken to an ER where they could wait for days or even weeks for an open psychiatric bed.

The problem was most acute in rural areas. The Burke Mental Health Emergency Center is a community mental health center serving twelve counties in east Texas, a region with a population of more than 370,000 covering 11,000 square miles.

Burke began to look for solutions and reached out to stakeholders – advocates, hospitals, law enforcement, the local university – and formed a network to develop and improve the approach to care. The group determined that the region needed a dedicated place where patients in crisis could go, where hospitals could send people who were presenting in their ERs, and where law enforcement could take people they apprehended who needed immediate psychiatric help.

From there, an emergency care model was born.

“The requirements have changed dramatically and telemedicine now needs to influence clinical, operational and financial outcomes.”

“Newly available state funding in 2007 that was earmarked for special projects in crisis response helped us fuel the creation of a regional mental health authority that became the Burke Mental Health Emergency Center,” explained Susan Rushing, CEO of the Burke Mental Health Emergency Center. “Our challenge became how to use technology to help us better service patients that came through our doors in crisis. The answer we turned to was telepsychiatry, and the center opened its doors in 2008.”

The Burke Mental Health Emergency Center is an innovative option to hospital emergency room services for area residents experiencing a mental health crisis, she added. Located in Lufkin, Texas, it is the first freestanding, rural comprehensive psychiatric emergency program in which psychiatric services are performed entirely by emergency telepsychiatrists, she said.

Burke sought the help of Dr. Avrim Fishkind, then the CEO of JSA Health, which was recently acquired by telemedicine vendor SOC Telemed. He brought the telepsychiatry approach to the emergency center.

Back in 2004, Fishkind was tasked by the state of Texas to design a plan that could bring psychiatric services to the entire state. Ultimately, Fishkind helped to co-pioneer the Burke Mental Health Emergency Center by introducing the emergency telepsychiatry platform.

Today, SOC Telemed is the largest provider of telepsychiatry in the country, Rushing contended. Its telemedicine technology platform, Telemed IQ, is an enterprise offering allowing hospitals, health systems and other healthcare organizations the ability to power their telemedicine programs with their own clinical team or in conjunction with SOC Telemed clinicians.

The initial approach was co-designed by Fishkind and included the clinical programming along with access to 16 psychiatrists as well as an advanced practice nurse who administered care remotely.

Registered nurses provide 24/7 telephone triage to expedite admissions and patients are able to see a psychiatrist within 30 minutes, via video through the technology platform. The rapid response provided by the telemedicine platform allows for a quick de-escalation of psychiatric symptoms through medications and interventions that are provided both by on-site staff as well as the telepsychiatry consult, Rushing explained.

“Before the emergency center, the first stop for all mental health emergencies was a hospital emergency department for medical clearance and transitioning to the next level of care,” Rushing said. “This process took an average of 9.2 hours, with one out of every 19 emergency visits resulting in medical-surgical hospital admission because of a lack of psychiatric beds.”

Since opening 10 years ago, and through the use of telepsychiatry, the Burke Mental Health Emergency Center has treated nearly 11,000 county residents in crisis while providing more than 30,000 bed days – all to patients who mostly fall in the category of low income. Without the emergency center, these patients would have been transferred to area hospitals, Rushing added.

“On the 10th anniversary of our project, we commissioned a study that focused on the impact of prevented ER visits,” she said. “Taking into consideration the annual number of emergency center admissions, influence of each hospital in the 12-county area, patients who fell under the major diagnostics category code and other variables, the study considers the estimate of emergency center-created cost avoidance in area hospitals to be a cumulative value between $17.7 million and $22 million over the seven-year period measured.”

This is directly correlated to the use of telepsychiatry by effectively screening and treating patients, she added.

“While every hospital or care center is different, it is imperative to find a telemedicine provider that provides a proven methodology for project planning, workflow analysis, predictive supply/demand modeling, staff and physician training, mock consults, reporting and analytics, and more,” said Rushing.

“Before implementing a telepsychiatry program, you also need to analyze factors that are driving cost, including patient volume, average length of stay, wait times and others,” she explained.

Many of these services were in their infancy at the time the emergency center was conceived. Initial telemedicine programs were defined as any sort of audio or video technology that facilitated connections between patients and off-site clinicians.

“Success was measured solely on the quality of connectivity,” Rushing said. “The requirements have changed dramatically and telemedicine now needs to influence clinical, operational and financial outcomes. Telemedicine platforms must contemplate a variety of choices in real time using business principles, hospital requirements and advanced algorithms.”

Ultimately, an enterprise telemedicine program should not only improve clinical outcomes but also be scalable, flexible, innovate and even be hardware-agnostic, she said.