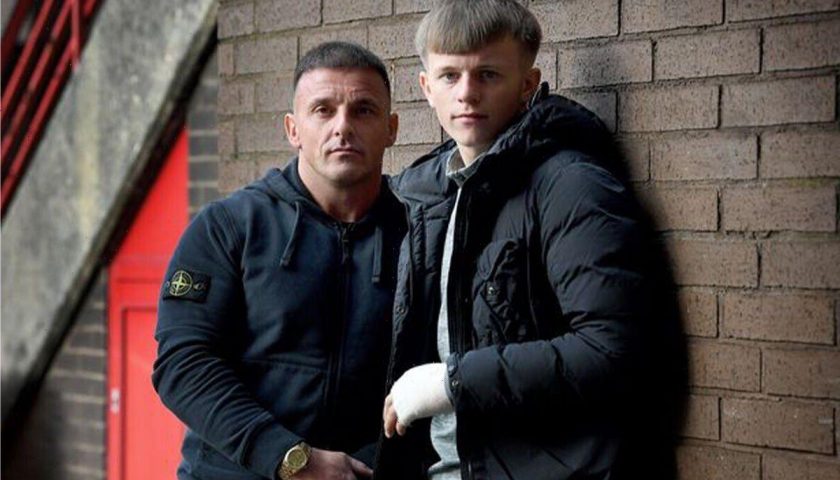 A teenager who was set alight by an exploding firework, and nearly lost his thumb as a result, has told of his horrifying ordeal.

Rio Diveney, 16, had lit the firework given to him by a friend when it ‘”blew up” before he blacked out as it set fire to his coat and top.

Rio’s entire hand was left split down the middle with his thumb and one of his fingers left “hanging on by skin,” Manchester Evening News reports.

The Oldham teen was rushed to hospital where he underwent surgery to save the digits. He needed pins inserted into his thumb before it was stitched back onto his hand.

“One of my friends said he had this firework, so he’s brought it outside to me and I just thought it was a normal firework,” Rio said in a video filmed by Greater Manchester Fire and Rescue Service (GMFRS) just weeks after the incident last October, and re-shared ahead of Guy Fawkes night as part of their ‘Bang Out of Order’ campaign.

“So I took it to the corner of the street, went to light it and it just blew up. It didn’t make the noise a normal firework would. I thought it was going to light normally, then blow up but it didn’t it just blew up straight away.”

Former Newman RC College pupil Rio, from the Moorside area of Oldham, is said to have ignited the gunpowder in the £25 rocket during the drama on Roundthorn Road.

“So I pulled my clothes, my top and my coat off and I was just like ‘what’s happened?’ I looked at my hand and thought ‘I need to go to hospital.'”

After being taken to the Royal Oldham Hospital by the mother of one of his friends, he was later transferred to Wythenshawe Burns Unit for further treatment.

Rio said his thumb and one of his fingers were left “hanging on by skin”. He also suffered burns to his chest and abdomen. He underwent surgery on his right hand before beginning an intensive course of physiotherapy.

Rio’s dad Ricky said: “My mind was all over the place basically. Obviously, I was panicking, I was scared. I didn’t know what had gone on. I was just told his hand was hanging off. I just thought the worst.”

“It obviously was bad” he said. “But at least he has still got his hand. But it was really scary.”

Following the incident, Rio told the Manchester Evening News: “I’ve learned that if someone offers you a firework, don’t take it.

“Think about what can actually happen.

“As a family, we don’t normally have our own fireworks, we attend organised displays. I will never mess with fireworks again.”

For more information about the Bang Out of Order campaign and safety advice click here.