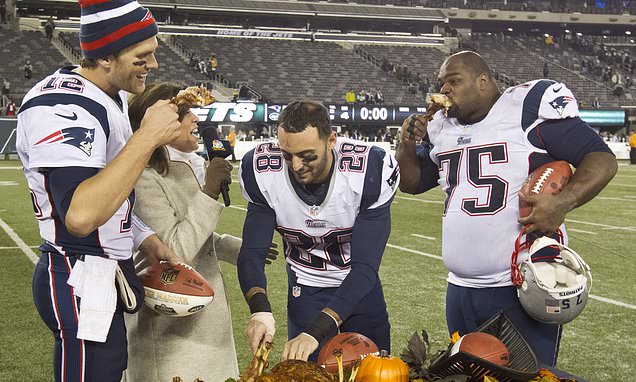 The Super Bowl diet: How players (and fans) get game-day ready – and what YOUR state will be tucking into this Sunday

The Super Bowl is about so much more than the game to players and fans alike: it’s also about the food.

Many NFL teams now keep nutritionists or dietitians on staff to ensure that the players are fed and fueled for peak performance.

But for the occasion of the Super Bowl, even the best athletes have their pet splurges – and so do fans.

We reveal who’s eating what – and where – on game day. 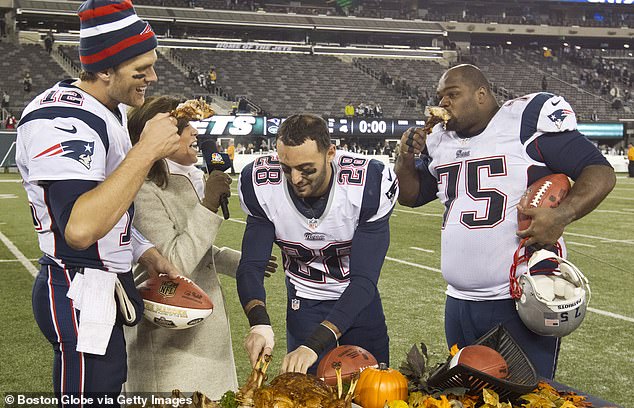 New England Patriots players indulged in turkey on the field on Thanksgiving, but for most of the year they keep to regimented diets

HOW TO EAT LIKE A PRO: NFL PLAYER’S DAILY DIETS WHEN IT’S NOT THE SUPER BOWL

An NFL player’s diet varies depending on the period of the season, the position he plays, the time he spends on the field and his own personal metabolism, former Seattle Seahawks diet consultant Dr Susan Kleiner told Daily Mail Online.

‘In general, there’s the lineman people who block and the people who run,’ she said.

‘They all need agility, but it’s a question of do you run into a wall or are do you need to be able to run as fast as you can.’

And the times have changed, so while football players still need to consume a lot of calories it’s now just as much about quality as quantity, and the focus is on whole foods.

But time is also of the essence. At the height of training, many players just don’t have the time to sit down and eat as many calories as they need to fuel them, so their diets are often part smoothies, shakes and supplements.

Both the Rams and the Patriots love indulging in fast food.

They have favorite spots in every state, including The Varsity in Atlanta, where the game will be held.

So NJ.com decided to ask some of the top players what their orders were to get an insight into how they eat.

Here is what they ordered in one sitting:

Depending on weight, a player may need to consume between 3,500 to 6,000 calories a day, drink the equivalent of two or three cups of milk, and half as many ounces of water as he ways in pounds.

After lighter morning activities or reviewing recordings of games, players might grab a smoothie that ‘hides vegetables and fruit,’ before hitting the field for practice.

Depending on time and position, mid-day meals vary.

Quarterbacks may have more practices and need to stay light, so they might have a light turkey sandwich or another smoothie or protein shake.

Blockers and other players have more time to bulk up at lunch and are more likely to have:

Then it’s time to ‘sit again, digest and train again,’ Dr Kleiner says, and perhaps grab another smoothie on the way to the field.

There are some cardinal rules:

Jeff Saturday, former NFL player and Super Bowl winner, said he would have two breakfasts on the morning of game day, with a lie-down in between.

It’s common to have oatmeal, carb-heavy pancakes, a steak, or eggs with meat.

Kick-off is at 6.30pm, so it’s a good idea to eat at around 3pm, giving enough time for digestion.

Lunch will usually be something starchy like pasta with a meaty sauce.

As it turns out, even the best players in the league get game-day jitters.

And what could be better for a nervous stomach than some nostalgic comfort food?

For many players – in the NFL and the NBA alike – there’s nothing like a good old-fashioned peanut butter and jelly sandwich, Kansas City Chiefs dietitian Leslie Bond told CNN.

The sweet sandwiches are best served with a tall glass of milk, too, for the full throw-back-to-childhood effect, she added.

PB&J has even been called the ‘secret addiction’ of a surprising number of professional basketball players, according to ESPN.

AFTER THE GAME: FEAST

Both the winners and the losers are treated to a buffet (though the losers tend not to attend theirs).

It usually consists of wings, burgers, chips – any kind of indulgence they wish.

For Tom Brady, it could be avocado ice cream and a significantly large portion of almonds.

FAN FAVORITES: THE SURPRISING WATCH PARTY DISHES AMERICANS ARE COOKING UP THIS YEAR

If you thought that football watch parties are all about chips, dips, wings and fried everything, this year’s hottest recipes may redefine your idea of kick-off cuisine.

Google Trend’s has (literally) mapped out what fans and each state are planning to whip up for their watch parties this year.

Taking a predictable lead was buffalo chicken dip – which is really more like a rich baked casserole of chicken, cream cheese, cheddar cheese, buffalo wing sauce and ranch dressing – is the most searched-for recipe in eight states.

But from there the list gets a bit unpredictable.

Rather than state classics like fried okra and and cornbread, Mississippians are planning to try a healthier snack on Super Bowl Sunday: granola bars.

And in Maine, fans are choosing more exotic far and cooking up Paella, the classic Spanish rice and protein dish. 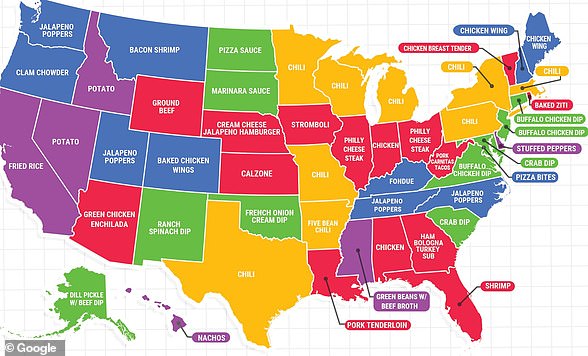 Nebraska: Pigs in a blanket