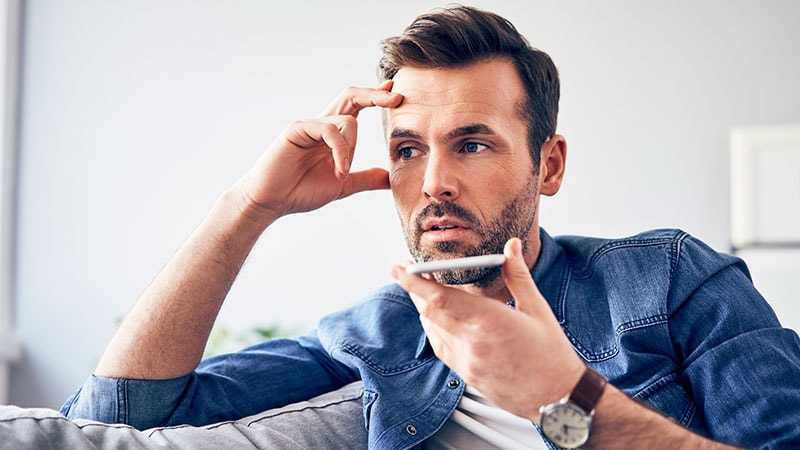 Imagine this: You think you might have COVID. You speak a couple of sentences into your phone. Then an app gives you reliable results in under a minute.

“You sound sick” is what we humans might tell a friend. Artificial intelligence, or AI, could take that to new frontiers by analyzing your voice to detect a COVID infection.

An inexpensive and simple app could be used in low-income countries or to screen crowds at concerts and other large gatherings, researchers say.

It’s just the latest example in a rising trend exploring voice as a diagnostic tool to detect or predict diseases.

Over the past decade, AI speech analysis has been shown to help detect Parkinson’s disease, posttraumatic stress disorder, dementia, and heart disease. Research has been so promising that the National Institutes of Health just launched a new initiative to develop AI to use voice to diagnose a wide array of conditions. These range from such respiratory maladies as pneumonia and COPD to laryngeal cancer and even stroke, ALS, and psychiatric disorders like depression and schizophrenia. Software can detect nuances that the human ear can’t, researchers say.

At least half a dozen studies have taken this approach to COVID detection. In the most recent advancement, researchers from Maastricht University in the Netherlands are reporting their AI model was accurate 89% of the time, compared with an average of 56% for various lateral flow tests. The voice test also was more accurate at detecting infection in people not showing symptoms.

One hitch: Lateral flow tests show false positives less than 1% of the time, compared with 17% for the voice test. Still, since the test is “virtually free,” it would still be practical to just have those who test positive take further tests, said researcher Wafaa Aljbawi, who presented the preliminary findings at the European Respiratory Society’s International Congress in Barcelona, Spain.

“I am personally excited for the possible medical implications,” says Visara Urovi, PhD, a researcher on the project and an associate professor at the Institute of Data Science at Maastricht University. “If we better understand how voice changes with different conditions, we could potentially know when we are about to get sick or when to seek more tests and/or treatment.”

A COVID infection can change your voice. It affects the respiratory tract, “resulting in a lack of speech energy and a loss of voice due to shortness of breath and upper airway congestion,” says the preprint paper, which hasn’t been peer reviewed yet. A COVID patient’s typical dry cough also causes changes in the vocal cords. And previous research found that lung and larynx dysfunction from COVID changes a voice’s acoustic characteristics.

Part of what makes the latest research notable is the size of the dataset. The researchers used a crowd-sourced database from the University of Cambridge that contained 893 audio samples from 4,352 people, of whom 308 tested positive for COVID.

You can contribute to this database – it’s all anonymous — via Cambridge’s COVID-19 Sounds App, which asks you to cough three times, breathe deeply through the mouth three to five times, and read a short sentence three times.

For their study, Maastricht University researchers “only focused on the spoken sentences,” explains Urovi. The “signal parameters” of the audio “provide some information on the energy of speech,” she says. “It is those numbers that are used in the algorithm to make a decision.”

Audiophiles may find it interesting that the researchers used mel spectrogram analysis to identify characteristics of the sound wave (or timbre). Artificial intelligence enthusiasts will note that the study found that long short-term memory (LSTM) was the type of AI model that worked best. It’s based on neural networks that mimic the human brain and is especially good at modeling signals collected over time.

For laypeople, it’s enough to know that advancements in the field may lead to “reliable, efficient, affordable, convenient, and simple-to-use” technologies for detection and prediction of disease, the paper said.

Building this research into a meaningful app will require a successful validation phase, says Urovi. Such “external validation” — testing how the model works with another dataset of sounds — can be a slow process.

“A validation phase can take years before the app can be made available to the broader public,” Urovi says.

Urovi stresses that even with the large Cambridge dataset, “it is hard to predict how well this model might work in the general population.” If speech testing is shown to work better than a rapid antigen test, “people might prefer the cheap non-invasive option.”

“But more research is needed exploring which voice features are most useful in picking out COVID cases, and to make sure models can tell the difference between COVID and other respiratory conditions,” the paper says.

So are pre-concert app tests in our future? That’ll depend on cost-benefit analyses and many other considerations, Urovi says.

Nevertheless, “It may still bring benefits if the test is used in support or in addition to other well-established screening tools such as a PCR test.”