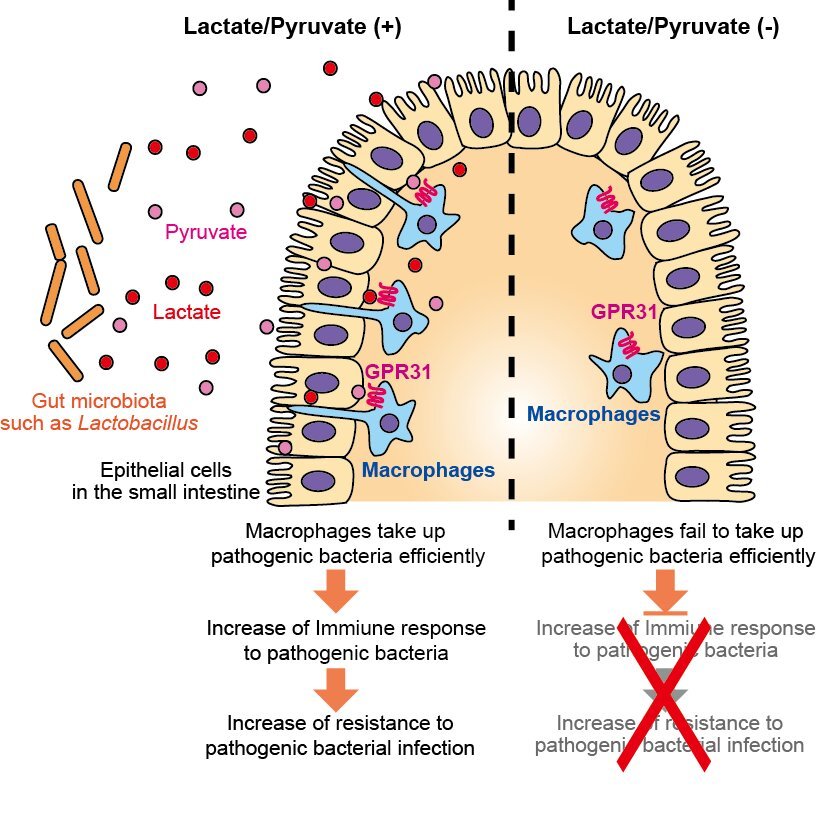 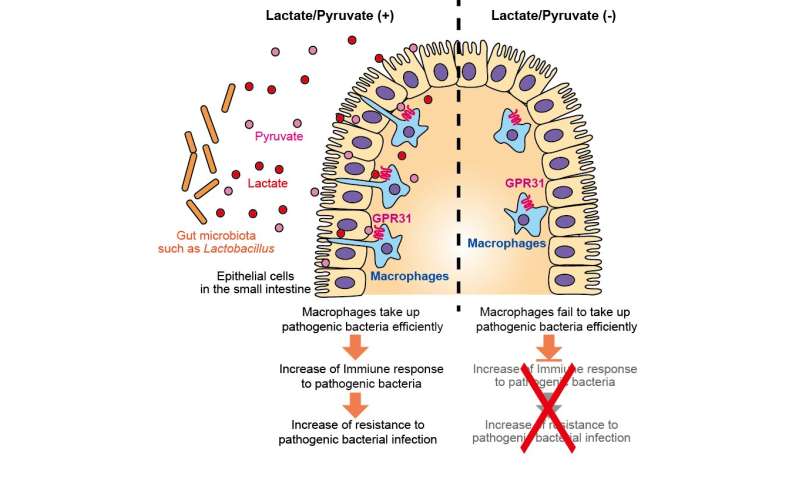 For at least a decade, researchers have known that normal bacteria in the gut can induce intestinal immune cells to extend tentacle-like structures, known as dendrites, to “capture” antigens, triggering both immediate and long-term immune responses. What was less clear was how the bacteria activate this process. Now, a research team led by Osaka University has found that the molecules responsible have been hiding in plain sight.

Metabolites are small molecules produced during metabolism, the chemical processes that occur inside all living cells to keep them ticking over. Metabolic pathways have been intensively studied in many organisms, with most common metabolites having very few secrets. Yet, in a recent paper published in the journal Nature, the team describes how they made an important discovery—two well-known metabolites, pyruvate and lactate, are in fact the instigators of dendrite protrusion by CX3CR1+ macrophages in the small intestine.

“After studying the available research, we hypothesized that bacterial metabolites present in the small intestine could possibly mediate dendrite protrusion,” explains lead author Naoki Morita. “After purifying different fractions from the contents of the small intestines of mice, we discovered that lactic acid and pyruvic acid, produced by lactic acid bacteria in the normal gut flora, act directly on intestinal macrophages.”

Next, the researchers identified GPR31, a protein residing on the surface of small intestinal macrophages, as the specific receptor for the two metabolites. Mice lacking GPR31 showed reduced dendrite protrusion by CX3CR1+ cells after being administered pyruvate or lactate and, as a result, decreased antibody production following infection with a non-pathogenic strain of Salmonella. However, the most significant revelation was yet to come.

“We then examined whether pre-treatment of normal mice with pyruvate or lactate as well as non-pathogenic Salmonella could protect against infection with a virulent strain of the bacterium,” says co-lead author Eiji Umemoto. “As we predicted, normal pre-treated mice, but not pre-treated GPR31-defective mice, showed increased survival and an enhanced immune response following infection with the virulent Salmonella strain.”