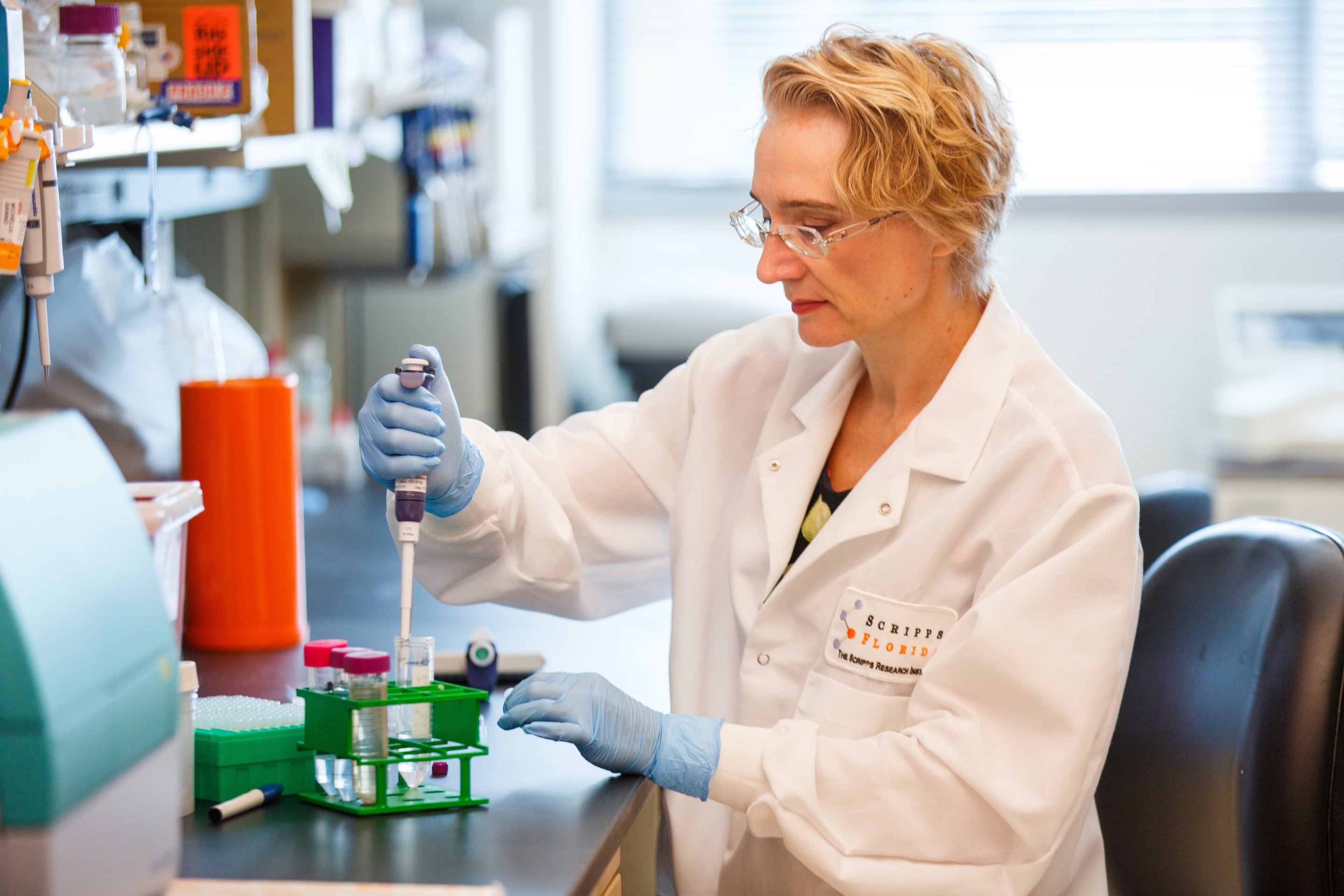 Biologists studying Parkinson’s disease have long hoped to solve the mystery of the telltale “clumps.” Scientists want to know how clumps of misfolded proteins damage brain cells and contribute to the disease.

Corinne Lasmézas, Ph.D., and her Scripps Research colleagues have now cracked the case of pα-syn*, a protein clump that is particularly toxic to the cells. Their recent study in the journal Neurobiology of Disease shows that pα-syn* causes damage by recruiting certain enzymes and an accomplice to damage cells. The accomplice is a protein called tau.

“We really felt like detectives in this study,” says Lasmézas, a professor on the Florida campus of Scripps Research. “We hope that this research into the root cause of Parkinson’s will bring us closer to finding a disease-modifying treatment.”

Parkinson’s disease is the most common neurodegenerative disease after Alzheimer’s. The disease strikes when the brain starts losing the cells that produce dopamine, a critical neurotransmitter.

Parkinson’s can have many causes, from genetics to environmental factors, but a protein called α-synuclein (α-syn in short) is found to turn bad and form clumps in every case. The Lasmézas lab has discovered that a particular type of α-syn clumps, or “aggregates,” that they called pα-syn*, starts to show up around cellular structures called mitochondria. This is a big problem for cells, which need mitochondria to produce their energy.

“We can see the mitochondria break into fragments in these cells,” says Lasmézas. “We wanted to understand the mechanism behind this.”

The investigation relied on a combination of cultured neurons and a mouse model of Parkinson’s, as well as analysis of donated brain tissues from deceased Parkinson’s disease patients.

The new research shows that pα-syn* hurts mitochondria by starting a cascade of events. First, pα-syn* activates a pathway in cells called the MAPK pathway. Enzymes of the MAPK pathway then modify the protein tau. This was a fascinating finding, since tau has long puzzled neuroscientists. Tau is known to form tangles inside neurons in the brains of Parkinson’s disease patients. But scientists did not know how they got there or what they were doing.

Lasmézas and her team found that enzymes of the MAPK pathway modify tau through a process called phosphorylation. This version of tau then clumps together with pα-syn* on the mitochondrial membrane. The two protein aggregates grow bigger and bigger, destroying the mitochondria in the process.

At last, the researchers knew what pα-syn* was doing and how it hurt cells. “We’ve shown how pα-syn* works as the main trigger in mitotoxicity,” says Lasmézas.

Study first author Diego Grassi, Ph.D., a research associate at Scripps Research at the time of the study, stresses the importance of discovering tau’s role in destroying mitochondria. Scientists know tau is involved in Alzheimer’s disease, so this study suggests a mechanism behind how Alzheimer’s and Parkinson’s overlap at the molecular level. The presence of α-syn and tau aggregates is also a telltale sign of other forms of dementia, and now scientists know how this might occur.

“This is also important for its possible implications in other neurodegenerative disorders,” says Grassi.

Lasmézas and Grassi say the next step in this research is to study how to stop pα-syn*, with the ultimate goal of treating Parkinson’s disease.