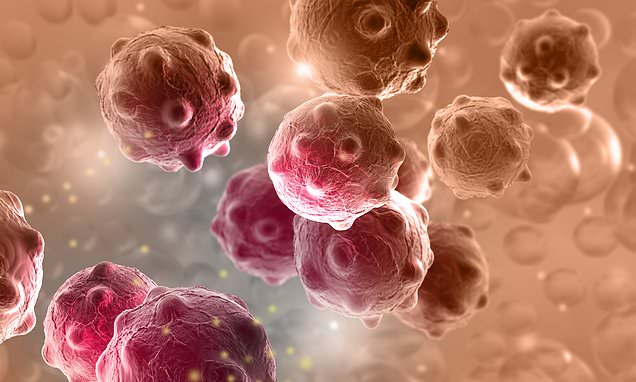 Scientists have created ‘decoy’ molecules that can kill tumours by tricking them.

The molecules attract proteins in cancer cells that would otherwise stick to other substances that help them thrive.

Tests on mice showed the stealthy technique made cancer cells function worse, while also slowing the growth of tumours.

The researchers hope their breakthrough will put them one step closer to creating a drug that targets multiple types of cancer. 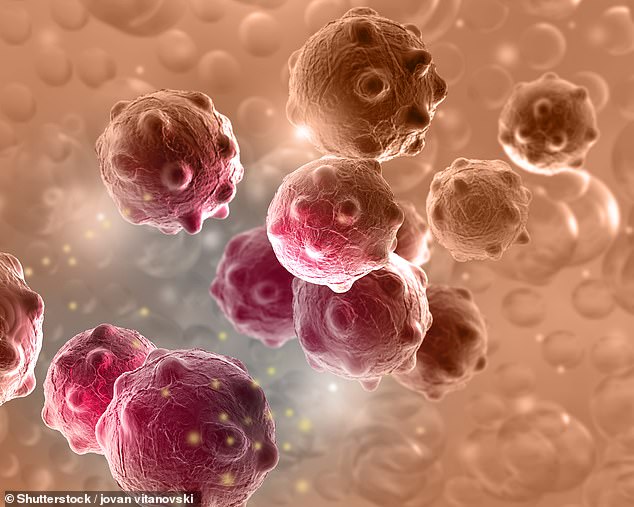 Scientists have created ‘decoy’ molecules that can kill tumours by tricking cancerous cells. Pictured, an illustration of cancer cells

So far, no cancer treatment is targeted at the proteins in question, according to the researchers at Hebrew University, Jerusalem.

They are called RNA-binding proteins as they bind to RNA molecules, essential for expression of genes and various biological roles in living organisms.

Evidence is accumulating that proteins in cancer cells that bind to RNA play a major role in cancer growth.

Professor Rotem Karni and his team at the HU Institute for Medical Research-Israel Canada (IMRIC) were behind the latest study.

They designed molecules, a type of oligonucleotide, that trick RNA-binding proteins called SRSF1 into binding with them instead.

HOW WOULD THIS METHOD WORK TO KILL CANCER CELLS?

Scientists are interested in how the processes of RNA splicing, a fundamental step of gene expression, is involved in cancer and other diseases.

They are looking at ways the proteins that control this process – splicing factors – contribute to cancer development, tumor progression and the metastatic process.

To date, there are no drugs that directly inhibit the activity of splicing factors.

Decoy molecules, known as decoy oligonucleotides, that inhibit specific splicing factors could be used to treat cancer and other diseases.

The molecules attract proteins in cancer cells that would otherwise stick to other substances that help them thrive.

Once bound, the proteins are inhibited from binding with the natural RNA molecules in cancer cells.

They also trialled the decoy molecules in brain cancer cells that were injected into healthy mice.

Three weeks after, the mice were killed and the tumours were analysed. The mice given the decoy molecules had much smaller tumours than the control group that had not been treated.

‘These results suggest that decoy oligonucleotides against SRSF1 can inhibit glioblastoma tumor growth in vivo,’ the authors wrote in Nature Communications.

Professor Karni said: ‘Our technology is a new approach in the war on cancer.

‘By understanding the biological function of RNA-binding proteins we successfully designed decoy molecules that inhibit these proteins and move us ever closer to creating an anti-cancer drug.

‘We still need to examine the toxicity of the decoy molecules and to test their efficacy on animals before we can move on to humans.

‘However, I’m optimistic, given that we’ve already succeeded at creating decoy oligonucleotides that inhibit RNA binding proteins in other kinds of cancers.’

In conventional chemotherapy treatments for cancer, patients are given drugs that target cancer cells – but not exclusively.

Cancer drugs commonly attack cells that divide rapidly which also means normal cells in the bone marrow, digestive tract, and hair follicles, are also affected, which is what causes side effects such as hair loss.

Treatments are being researched that can distinguish cancer cells from healthy cells so that only those will be eradicated.

A patent describing Professor Karni’s technology has been registered in the US and Europe.