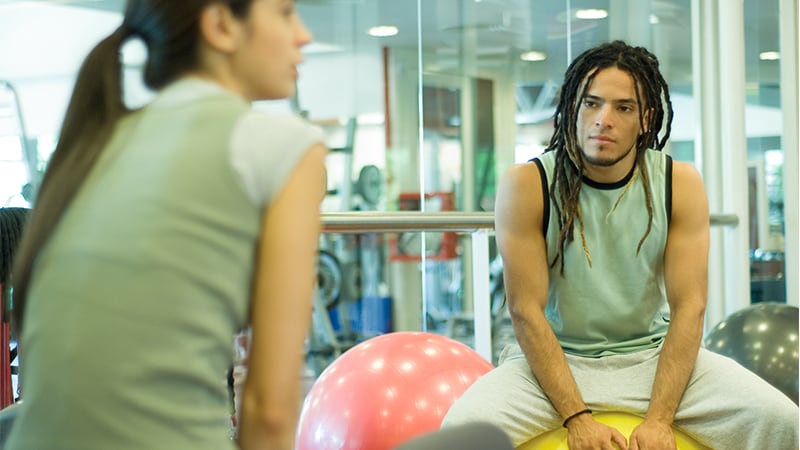 Could gut health be behind a person’s motivation — or lack thereof — to exercise?

Researchers at the University of Pennsylvania recently explored this topic when they wanted to find out why some lab mice seem to love their exercise wheel, while others mostly ignore it.

To start, the researchers used a machine-learning algorithm to look for biological traits that could explain the differences in activity levels among mice. And what they found surprised them: Genetics seemed to have little to do with it, but differences in gut bacteria appeared to matter more. A handful of studies backed that up: Thriving gut microbiomes have been linked with optimal muscle function in mice.

Sure enough, when the researchers dosed mice with broad-spectrum antibiotics, killing off their gut bacteria, the distance the rodents were able to run dropped by half. But off the antibiotics, the mice mostly regained their previous performance levels.

The findings, published in the journal  Nature  in December, suggest that the gut microbiome may help regulate the desire to exercise.

If confirmed in humans, this hypothesis could help explain why so many Americans (about half) fail to get the recommended amount of physical activity. Some may blame lack of time, energy, or interest. But perhaps the reason could come down to the trillions of microbes living in their gut.

This line of research could also lead to microbiome-based ways to get sedentary people off the couch or optimize athletic performance.

But how could one’s microbiome impact the motivation to move? To find the answer, the researchers zeroed in on the brain.

After treating the mice with antibiotics, the researchers sequenced RNA in the rodents’ striatum (the part of the brain responsible for motivation). They found reduced gene expression in the cells’ dopamine receptors — which release the neurochemical dopamine, making one feel like they’ve accomplished something good. In other words: Mice treated with antibiotics were getting less of a dopamine hit after their run.

“Only when we started focusing on the brain did we understand that the microbiome’s effect on exercise capacity was mediated by the central and peripheral nervous systems,” says study author Christoph Thaiss, PhD, a microbiologist at the University of Pennsylvania. “This realization completely changed the trajectory of the project.”

To find out how, exactly, bacteria in the colon were signaling the brain, the researchers performed a series of experiments over several years. They identified two types of bacteria, Eubacterium rectale and Coprococcus eutactus. These strains produce compounds called fatty acid amides that interact with endocannabinoid receptors in the gut.

Those endocannabinoid receptors signal the brain to cut back its production of monoamine oxidase, the compound that breaks down dopamine. With less of this dopamine-clearing compound in the brain, more dopamine could build up after a long run, making the mice feel good and eager to hit the exercise wheel again soon.

This gut-brain pathway “may have evolved to couple the initiation of prolonged physical activity to the nutritional status of the gastrointestinal tract,” Thaiss says. Gut bacteria monitor what’s in your colon and tell your brain whether you have enough food to fuel a workout.

The colon, or gut, hosts trillions of microbes with potentially hundreds of different bacteria strains. These strains are determined by the food we eat and the environment we occupy.

“The genetic impact on the microbiome is rather minor,” Thaiss says, “but lifestyle factors strongly impact the composition of the gut microbiome.”

He hopes to develop nutritional interventions to encourage the growth of the motivating types of bacteria, the kind that make a person want to go for a 5-mile run.

Moving forward,  the researchers need to find out whether the gut affects motivation in humans, too. To do that, they’re analyzing the gut microbiomes of people with varying levels of exercise motivation.

“With enough samples, we could potentially correlate species of microbiota that exist in exercise-motivated individuals,” says study co-author Nicholas Betley, PhD, a  biologist at the university.

Variations in the gut microbiome could help explain the “runner’s high” that some people have in a long-distance race. The research could also help promote weight training or sports participation.

“Imagine if a sports team could optimally motivate the athletes on the team to exercise,” says Betley. The lab is investigating the microbiome’s impact on high-intensity interval training.

Signals from the gut to the brain could be affecting body processes in other ways too, the researchers speculate.

“There are so many possibilities for how these signals may change physiology and impact health,” Betley says. “A new set of studies may well establish a whole new branch of exercise physiology.”