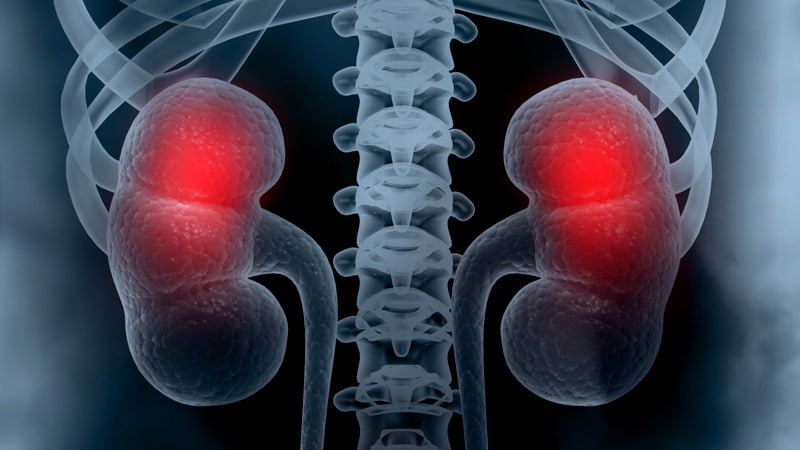 The latest meta-analysis of sham-controlled randomized trials shows that catheter-based renal sympathetic denervation produces clinically meaningful reductions in blood pressure with acceptable safety, but the strategy is not yet regarded as ready for prime time.

This meta-analysis, to bve presented at Transcatheter Cardiovacular Therapeutics (TCT) 2021, was based on seven blinded trials, all of which associated denervation with a reduction in systolic ambulatory BP, according to Yousif Ahmad, BMBS, PhD, an interventional cardiologist at Yale University, New Haven, Conn.

Although the BP-lowering advantage in two of these studies did not reach statistical significance, the other five did, and all the data moved in the same direction.

For ambulatory diastolic pressure, the effect was more modest. One of the studies showed essentially a neutral effect. The reductions were statistically significant in only two, but, again, the data moved in the same direction in six of the studies, and a random-effects analysis suggested that the reductions, although modest, were potentially meaningful, according to Ahmad.

Overall, at a mean follow-up of 4.5 months, the reductions in ambulatory systolic and diastolic BPs were 3.61 and 1.85 mm Hg, respectively. The benefit was about the same whether renal denervation was or was not performed on the background of antihypertensive drugs, which was permitted in five of the seven trials. In the other two, all patients were off hypertensive medication.

When the same analysis was performed for office-based BP reductions, which were available for five of the seven trials, the overall reductions based on the meta-analysis were 5.86 and 3.63 mm Hg for the systolic and diastolic pressures, respectively. Again, background antihypertensive therapy was not a factor.

Of the seven trials, three randomized fewer than 100 patients. The largest, SYMPLICITY HTN-3, randomized 491 patients in 2:1 ratio to denervation or sham.

Three of the studies in the meta-analysis were trials of the Symplicity flex device. Another two evaluated the Symplicity Spyral catheter. Both deliver radiofrequency energy to for denervation. The Paradise device, the focus of the remaining two trials, employs energy in the form of ultrasound.

According to Ahmad, adverse events regardless of device were rare and not more common among those in the active treatment arm than in those treated with a sham procedure. Although one of these trials, RADIANCE-HTN SOLO associated denervation with efficacy and safety out to 12 months , Ahmad concluded that the mean follow-up of 4.5 months is not sufficient to consider long-term effects.

More Than 20 Meta-Analyses Published So Far

By one count, there have been more than 20 meta-analyses of renal denervation published previously yet this intervention is still considered “controversial,” according to Ahmad. Relative to the previous meta-analyses, this included the RADIANCE-HTN TRIO trial, which is the latest such sham-controlled study and added 136 patients to the dataset of high-quality trials.

Basically, the results led Ahmad to conclude that, although the treatment effect is modest, it could be valuable in specific groups of patients, such as those reluctant or unable to take multiple medications or any medications at all. In addition to generating more data on efficacy and safety, he said longer follow-up is also needed for calculations of cost-effectiveness. Larger-scale observational studies might be one way of collecting these data, he reported.

The results of this study were published online in JACC Cardiovascular Interventions with an accompanying editorial by David E. Kandzari, MD, director of interventional cardiology, Piedmont Hart Institute, Atlanta.

Commenting on the large pile of meta-analyses, sometimes published months apart, Kandzari explained that their “short half-life” is a product of the continuous updating of data with new trials. For a procedure that remains controversial, he said these constant relooks are inevitable.

“My point is that, with more studies, we can expect to see more meta-analyses. It is just the way this is going to work,” Kandzari said in an interview.

Even as the authors of these analyses attempt to cull the best data from the most rigorously performed trials, “we are also going to have to look at the individual studies, because of the differences in the trial designs, particularly the devices used,” according to Kandzari, who was the principle investigator of the sham-controlled SPYRAL HTN-ON MED trial.

So far, the data, despite some inconsistencies, have supported “clinically meaningful” BP reductions and acceptable safety regardless of the device used, according to Kandzari. Although he also agrees with the basic premise that more long-term data are needed to better determine how renal denervation should be applied in management of hypertension, he does think it will eventually find a role that is “complimentary to, rather than a replacement for, drugs.”

“The effect is modest, but keep in mind that the effect size is similar to that of a single oral medication, and there are some features, such as an always-on 24-hour effect that could be useful,” he said.

“We have enough of a signal to start thinking of how this will be enveloped into routine care,” he said.

But it is not ready yet. This was the point made by Ahmad, and it was seconded by Kandzari. One of the senior authors of the meta-analysis, Deepak Bhatt, MD, executive director of interventional cardiovascular programs, Brigham and Women’s Health, Boston, was also asked to weigh on when it will be ready for prime time.

“At a minimum, I would recommend completion of ongoing sham-controlled randomized trials before considering clinical use of renal denervation. Longer term safety and durability data, as well as data on cost-effectiveness, are all still needed – preferably from randomized trials as opposed to registries,” he said.

“Ideally, larger sham-controlled trials with longer follow-up and clinical endpoints, as opposed to only blood pressure measurements, would be performed, although I am not aware of any plans at present,” he added.