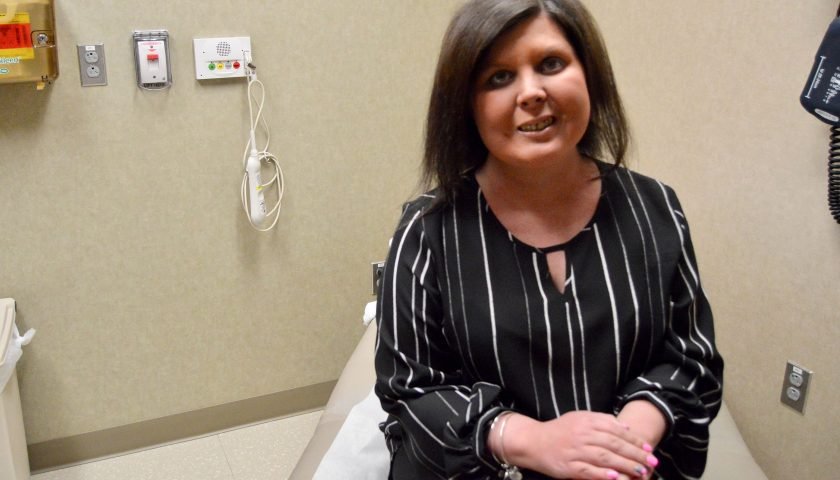 A North Carolina woman who was given a week to live after being diagnosed with an aggressive brain tumor says a new drug is the reason she’s still alive eight months later.

Amanda Thomas, 30, wasn’t feeling well after a minor car wreck last November, and her mom worried she might have a concussion. But when the two of them went to the hospital, an MRI showed something far more serious. Doctors diagnosed her with H3 K27M mutant glioma: a rare brain cancer that’s notoriously difficult to treat. The tumor wraps around the brain like a spider web and rarely responds to chemotherapy.

Dr Ashley Sumrall is the section chief of Neuro-oncology at Levine Cancer Institute where Thomas is being treated. “Her tumor was really large and very deep within the brain,” she tells PEOPLE. “When I got involved in her case, she she was dying.”

Thomas remembers the bleak prognosis. “They said I wasn’t going to make it, that I only had a few weeks to live,” Thomas says.

The former preschool teacher says she couldn’t eat and could barely get out of bed. She tried chemo first. When that didn’t work, she agreed to be part of a clinical trial that was only taking place in New York at the time. Dr. Sumrall persuaded the FDA and the drug company to expand the trial to include the Levine Cancer Institute in Charlotte, North Carolina.

Thomas tells PEOPLE, “They told me about the pill and I was a little bit scared because I didn’t know anything about it and I’m not one to take a lot of pills.”

The drug, called ONC201, is a pill patients take weekly that aims to kill cancer cells (without harming healthy cells) by shutting down the pathways that help tumors grow.

“I noticed a difference right away. I felt better, I was able to walk and get up and do things and play with my dog,” Thomas says.

Dr. Sumrall says it’s hard to say for sure what Thomas’s prognosis will be. “Traditionally someone with a tumor like hers should have passed away months ago,” she says. “But we know some patients on this drug have seen their tumors shrink by 90 percent.”

She continues: “This summer Amanda came in and told us she ran down a pier and jumped into a lake. And that was just amazing to hear. Researching brain cancer is a field full of patients who don’t live long, and then you get your hands on a special drug, and to have an opportunity to help someone and see it work, it reminds us why we keep doing the research.” She adds that the trial is now in four hospitals nationwide.

Thomas says she always had faith that she would make it. “They tell me I have years to live now. To think you only have a week to live, to go from that to this…I want people to know about clinical trials because I believe in them so much now.  I was nervous at first but to see how wonderful it’s worked, that’s really amazing.”