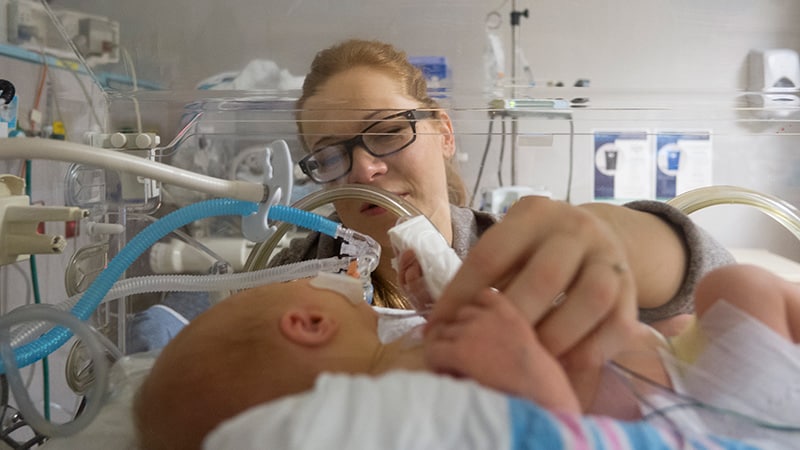 In a Canadian cohort study that included more than 60,000 children, 35% of children born prematurely had scores on the Early Development Instrument (EDI) that indicated they were vulnerable to developmental problems, compared with 28% of children born full term.

“Our take-home message is that being born prematurely, even if all was well, is a risk factor for not being ready for school, and these families should be identified early, screened for any difficulties, and offered early intervention,” senior author Chelsea A. Ruth, MD, assistant professor of pediatrics and child health at the University of Manitoba in Winnipeg, told Medscape Medical News.

The findings were published online August 8 in JAMA Pediatrics.

The investigators examined two cohorts of children who were in kindergarten at the time of data collection. One of them, the population-based cohort, included children born between 2000 and 2011 whose school readiness was assessed using the EDI data. Preterm birth was defined as a gestational age (GA) of less than 37 weeks. The other, the sibling cohort, was a subset of the population cohort and included children born prematurely and their closest-in-age siblings who were born full term.

The main outcome was vulnerability in the EDI, which was defined as having a score below the 10th percentile of the Canadian population norms for one or more of the five EDI domains. These domains are physical health and well-being, social competence, emotional maturity, language and cognitive development, and communication skills and general knowledge.

After data adjustment, 35% of children born prematurely were vulnerable in the EDI, compared with 28% of those born full term (adjusted odds ratio [AOR], 1.32).

The investigators found a clear GA gradient. Children born at earlier GAs (<28 weeks or 28 – 33 weeks) were at higher risk of being vulnerable than those born at later GAs (34 – 36 weeks) in any EDI domain (48% vs 40%) and in each of the five EDI domains. Earlier GA was associated with greater risk for vulnerability in physical health and well-being (34% vs 22%) and in the Multiple Challenge Index (25% vs 17%). It also was associated with greater risk for need for additional support in kindergarten (22% vs 5%).

“The study confirmed what we see in practice, that being born even a little bit early increases the chance for not being ready for school, and the earlier a child is born, the more likely they are to have troubles,” said Ruth.

In the sibling subset, EDI outcomes were similar for children born prematurely and their siblings born full term except for the communication skills and general knowledge domain (AOR, 1.39) and the Multiple Challenge Index (AOR, 1.43). Male sex (AOR, 2.19) was associated with EDI vulnerability in this cohort as well, as was maternal age at delivery (AOR, 1.53).

“Whether prematurity is a cause or a manifestation of an altered family ecosystem is difficult to ascertain,” Lauren Neel, MD, a neonatologist at Emory University in Atlanta, Georgia, and colleagues write in an accompanying editorial. “However, research on this topic is much needed, along with novel interventions to change academic trajectories and care models that implement these findings in practice. As we begin to understand the factors in and interventions for promoting resilience in preterm-born children, we may need to change our research question to this: could we optimize resilience and long-term academic trajectories to include the family as well?”

Commenting on the study for Medscape, Veronica Bordes Edgar, PhD, associate professor of psychiatry and pediatrics at the University of Texas Southwestern Medical Center’s Peter O’Donnell Jr Brain Institute, in Dallas, Texas, said, “None of the findings surprised me, but I was very pleased that they looked at such a broad sample.”

Pediatricians should monitor and screen children for early academic readiness, since these factors are associated with later academic outcomes, Edgar added. “Early intervention does not stop at age 3, but rather the first 6 years are so crucial to lay the foundation for future success. The pediatrician can play a role in preparing children and families by promoting early reading, such as through Reach Out and Read, encouraging language-rich play, and providing guidance on early childhood education and developmental needs.

“Further examination of long-term outcomes for these children to capture the longitudinal trend would help to document what is often observed clinically, in that children who start off with difficulties do not always catch up once they are in the academic environment,” Edgar concluded.

The study was supported by Research Manitoba and the Children’s Research Institute of Manitoba. Ruth and Neel have disclosed no relevant financial relationships.