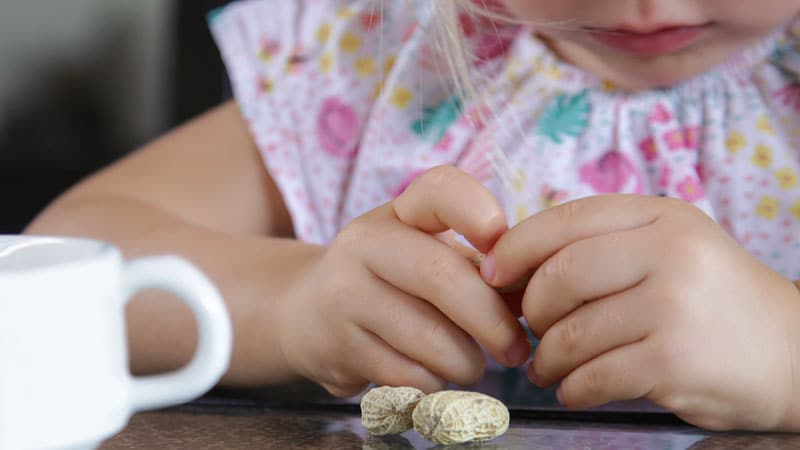 LOUISVILLE, Kentucky — Compared with placebo, treatment with peanut (Arachis hypogaea) allergen powder-dnfp (Palforzia) significantly improved the amount of peanut protein that could be tolerated by peanut-allergic children between 1-3 years of age after 12 months of treatment with the oral immunotherapy, according to results of a randomized clinical trial.

The phase 3 POSEIDON study also showed that the oral immunotherapy featured a favorable safety profile in this young patient population.

Findings of the trial were presented here by George du Toit, MB BCh, at the American College of Allergy, Asthma and Immunology (ACAAI) Annual Scientific Meeting 2022.

In an interview with Medscape Medical News, du Toit, a professor of pediatric allergy at Evelina London Children’s Hospital in the UK, explained that at present the United States has no licensed treatment for children with peanut allergy who are younger than 4 years of age. Avoidance currently represents the only effective option for preventing allergic reactions in these patients.

Peanut allergen powder-dnfp is an oral immunotherapy that is currently approved by the US Food and Drug Administration (FDA) for the mitigation of allergic reactions associated with accidental exposure to peanuts in patients aged 4-17 years with a confirmed diagnosis of peanut allergy.

To determine the efficacy of the oral immunotherapy in a younger group of patients, du Toit and colleagues randomly assigned 146 patients aged 1-3 years (median, 2 years; 58.2% male) with confirmed peanut allergy to receive either Palforzia (n = 98) or placebo (n = 48).

At 12 months, most patients assigned to the active treatment (73.5%) with Palforzia tolerated at least a 600 mg single dose of peanut protein, which du Toit noted is equivalent to two peanut kernels.

In contrast, only 6.3% of patients in the placebo group were able to tolerate that same dose of peanut protein by the 12-month follow-up (P < .0001).

Additionally, 68.4% of children treated with Palforzia vs 4.2% of children who received placebo were able to tolerate a 1000 mg dose of peanut protein after 12 months of treatment (P < .0001).

The researchers also reported that a significantly greater proportion of patients in the oral immunotherapy group vs the placebo arm was able to tolerate the highest dose level (2000 mg) in the exit double-blind, placebo-controlled exit food challenge (DBPCFC) (61.2% vs 2.1%, respectively; P < .0001).

Between baseline and exit DBPCFC, the median highest tolerated dose of peanut protein increased by 66-fold from the previous year to the 12-month mark. “This is really an impressive amount that will hopefully keep these children safe from everyday exposures,” explained du Toit.

“What’s convenient about this product is that it’s highly standardized and you would be taking it every single day on most days, which has been shown in all young kids to improve quality of life,” he added.

Du Toit noted that the protection conferred by the oral immunotherapy may help prevent accidental reactions to peanut protein, but those reactions that may occur tend to become less frequent and less severe over time with the therapy, as observed in older patient cohorts.

With respect to safety, there were no serious or severe adverse events (AEs) related to the oral immunotherapy. Systemic allergic reactions as a result of any cause were comparable between the treatment arms: 8.1% for Palforzia and 8.3% for placebo.

Approximately 2% of patients who received the oral immunotherapy experienced treatment-related systemic allergic reactions (SARs), but these events were not observed in the placebo arm. The three treatment-related SARs occurred during up-dosing, according to du Toit.

Common AEs associated with Palforzia involved the skin and subcutaneous tissues (erythema and urticaria), the gastrointestinal system (abdominal pain and vomiting), and the respiratory, thoracic, and mediastinal systems (cough and sneezing). Whereas 3.1% of patients treated with Palforzia used epinephrine for a treatment-related AE, none of the patients in the placebo arm required epinephrine for these events.

According to a press release from the manufacturer describing the study data, findings from the study will be submitted to the FDA in the first half of 2023. Availability of the agent for the treatment of peanut-allergic children aged 1-3 years may fill an unmet treatment need for this population, du Toit suggested.

“If it then gets licensed, there will be two options for this age group,” commented du Toit, “which will either be this active therapy or avoidance.”

Du Toit noted that if the oral immunotherapy is ultimately approved, families would have to be counseled on how to use the active intervention and be made aware of their choice between using the therapy vs opting for avoidance.

Beginning treatment earlier may also be particularly beneficial for long-term protection, he suggested. “Being able to start oral immunotherapy earlier would be quite helpful for toddlers who have had reactions to peanuts,” commented Tarbox, who wasn’t involved in the POSEIDON trial. “This would reduce accidental ingestions for this age group, support long-term quality of life, and give peace of mind to families.”

Brandon May is a freelance medical journalist who has written more than 2100 articles for medical publications in the United States and the UK. Twitter: @brandonmilesmay