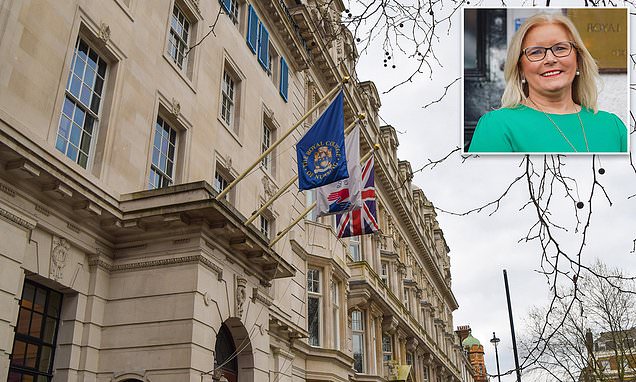 Royal College of Nursing promises to leave ‘no stone unturned’ in wake of damning report into its toxic, male-dominated culture where women are at risk of ‘alcohol and power-related exploitation’

The Royal College of Nursing (RCN) has pledged to leave ‘no stone unturned’ after a damning report into its culture.

Women are at risk of ‘alcohol and power-related exploitation’ and junior nurses were groped by senior union officials, the probe found.

The inquiry was set-up following accusations of sexual harassment and bullying.

It also highlighted a misogynistic environment in higher levels of union leadership, with ‘loud and abrasive’ male voices dominating the environment ‘to the detriment of female colleagues’.

Pat Cullen, general secretary of the union, has apologised on behalf of the 106-year-old college.

She said ‘no individual is beyond reproach’ and that people implicated in the report could ‘face internal and regulatory consequences’.

The independent report, conducted by Bruce Carr KC, set out to investigate issues raised about the culture within the RCN.

While the RCN declined to share the report with the media, The Guardian received a leaked copy.

The report, which examined internal union culture from 2018 onwards, suggested the RCN’s governing body, known as council, was ‘not fit for purpose’.

It said the council was seen as a ‘a misogynistic environment in which loud and abrasive male voices dominate the environment to the detriment of women’. 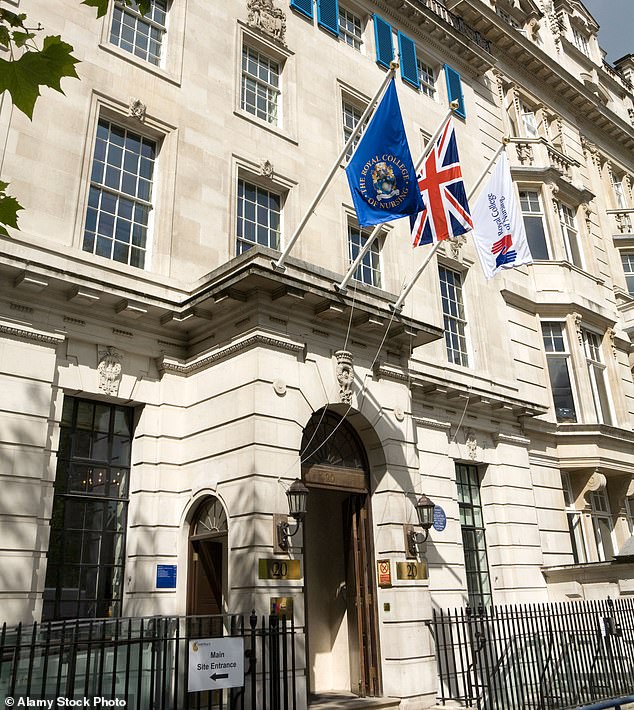 The Royal College of Nursing has been rocked after a damming probe highlighted instances of bullying, misogyny and inappropriate sexual behaviour (pictured RCN HQ)

Health Secretary Therese Coffey has told nurses the Government will not budge on pay amid the looming threat of a mass walk-out.

Last week the Royal College of Nursing (RCN) began balloting its 300,000 members working in the NHS, urging them to vote for strike action for the first time in its 106-year history.

Union bosses are demanding nurses get a salary uplift of at least five per cent above inflation, which currently sits at 12.3 per cent.

This would grant the average nurse, who earns roughly £35,600 each year according to the Government, an extra £6,150.

In comparison, the Government has offered NHS nurses a salary rise of roughly four per cent, giving the average nurse an extra £1,400.

Discussing the threat of a nursing strike with Sky News, Dr Coffey said: ‘I understand that the ballot is now open.

‘We’ve honoured the independent pay review body’s recommendations on this.

‘That was higher than many of the other pay rises that other public-sector workers are getting.

‘Dare I say it, having respect of the independent pay review body, I’m not anticipating that we’ll be making any further changes.’

Mr Carr highlighted that four out of the five people who resigned from council in the past three years were women, of whom three were from a black, Asian or minority ethnic background.

He added that women and ethnic minorities on the council are said to face a ‘hostile environment at least from the perspective of those who felt they had to leave’.

The report also raised serious concerns about the RCN’s annual conference, known as congress, where ‘inappropriate sexual culture’ warrants further investigation ‘to identify the extent to which [it] has actually resulted in exploitation of the vulnerable’.

Mr Carr said there was a ‘sexual culture at congress… in which the risk of exploitation is significant.’

He added that congress was seen by many college staff as ‘an opportunity to engage in sexual activity,’ adding that this carried ‘a substantial risk that a line will be crossed so as to become exploitative’.

Large amounts of alcohol are consumed at events held around the conference.

Concerns over its congress were so high while the review was underway that last year’s event was held virtually due to ‘serious allegations of sexual harassment’ by some members.

Individuals were not named in the report, but presumably some remain in post as Mr Carr calls for them to consider their positions in the light of allegations.

Testimonial given to the barrister included a ‘prevalence of extramarital sexual relationships’ at the annual congress, a council member said that there was ‘abuse, grooming, preying’ in a ‘boozy sexualised culture’ and other allegations of sexual harassment were made outside of conference.

The RCN has accepted the recommendations set out in the review and said it will set out ‘how it intends to make those structural reforms and raise standards’.

It has also set up a helpline and a reporting line for those affected.

The report comes as the RCN is balloting all its UK members to see if they are prepared to take strike action.

But the union said the report would not distract from pay and safe staffing issues.

Ms Cullen, who was appointed to her role last year, said: ‘The college owes Bruce Carr KC a debt of gratitude for the time he has taken to produce a report of such detail, breadth and quality.

‘Where behaviours have fallen short in the past, I apologise today on behalf of the entire RCN.

‘I will hold this report close as I redouble efforts to overhaul this college and give members the strong, professional and genuinely representative organisation they deserve.’

She said she was committed to enacting change in the union and bringing individuals whose behaviour was mentioned in the report to account.

‘I do not want to see this proud body dragged through the mud but my commitment to leave no stone unturned is even greater,’ she said.

‘No individual is beyond reproach. Whatever role they held previously or even today, those implicated in the report, and following appropriate investigation, will face internal and regulatory consequences.

‘This review does not attach names to the incidents described but I am determined that the forthcoming investigations give complainants and victims the justice they deserve and serve as definitive proof of our commitment to change.’

A copy of the report has also been handed to Britain’s nursing regulator, the Nursing and Midwifery council who have power to strike nurses off from working for bad behaviour.

It’s chief executive, Andrea Sutcliffe, said:  ‘Our code and standards set out the high level of conduct we expect from all those on our register, regardless of position or seniority.’

‘We’re making direct contact with Bruce Carr KC and will consider his report carefully to understand whether we may need to take any regulatory action.’

In the wake of the report, Professor Rod Thomson the RCN council member for the West Midlands announced he would resign from his position.

On Twitter he said this was ‘to enable a change in the composition of Council and to affect a positive change in its gender and ethnic balance’ and ‘not as a result of any association with the behaviour in the Carr Report’.