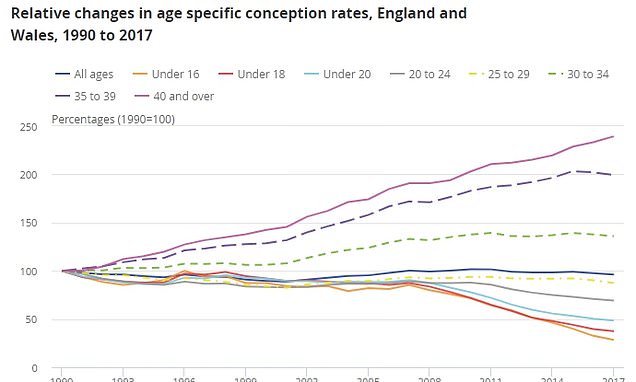 The number of women getting pregnant over the age of 40 is almost double what it was 20 years ago, according to new figures.

The rate per 1,000 women has risen from 8.7 to 15.8 which, at 85 per cent, is a smaller increase than the actual number because there are more in the age bracket.

Figures show pregnancies overall are falling over time as fewer women get pregnant each year, but older women are bucking the trend. 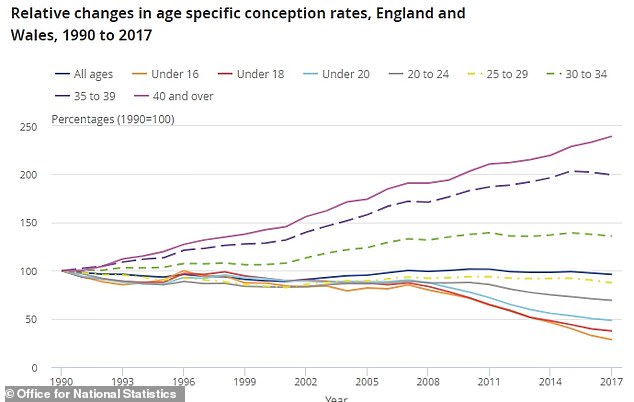 The number of women having children is increasing fastest among those aged over 40, while it’s dropping in teenagers and women in their 20s (source: Office for National Statistics)

Data published today by the Office for National Statistics provide the latest update in ongoing coverage of birth rates in England and Wales.

The conception rate among women aged 40 and over has been climbing since 1990.

Although later pregnancies come with a higher risk of complications such as miscarriage, pre-eclampsia, or a need for caesarean section, they are increasingly common.

Experts said women are putting off having children until they are older for a variety of reasons.

Increased access to higher education, higher employment rates and the ‘increased importance of a career’ are factors, as is delaying motherhood because of uncertain labour market conditions or housing, the ONS said. 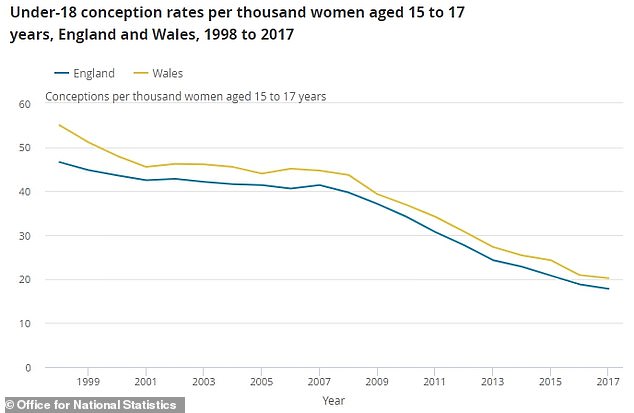 The number of girls getting pregnant before the age of 18 has now been falling consistently for 10 years – between 2007 and 2017 – which may be down to better use of contraception and girls focusing more on their education, according to experts

WHAT ARE THE HEALTH RISKS OF A LATE PREGNANCY?

And for the second year running, this was the only age group to see an increase.

Meanwhile, figures on abortions showed a rise among all age groups apart from the under-16s.

Among those aged 30 to 34, 15 per cent of pregnancies ended in abortion while the figure was a fifth for women aged 25 to 29.

In 2017, the majority (58.7 per cent) of all conceptions in England and Wales were outside marriage or civil partnership.

Dr Asha Kasliwal, president of the Faculty of Sexual and Reproductive Healthcare (FSRH), said: ‘Rates of conceptions leading to legal abortions to women over 25 have been climbing continuously during the last decade, which might be indicative of an unmet need for contraception.

‘What underpins this issue is the need for comprehensive sexual and reproductive healthcare services that cater to the changing needs of women across the life course and are available throughout the country.

‘Older women are spending more years of their lives managing their fertility and have been particularly affected by a fragmented women’s health commissioning system.’

TEENAGE PREGNANCIES DROP FOR 10TH YEAR IN A ROW

The number of girls getting pregnant before they turn 18 has now been falling for an entire decade.

Experts suggest the reason fewer teenage girls are getting pregnant is that they have better access to, and are more aware of, contraception, and are more likely to go to university.

As well as the total number, the rate per thousand has also dropped.

The continued decline of teenage pregnancies is longest since records began.

Statistician Kathryn Littleboy said: ‘Conception rates for women aged under 18 years in England and Wales decreased for the 10th year running in 2017.

‘Possible reasons for the continued decrease in teenage conception rates include improved sex and relationship education, better access to contraceptives and increased participation in higher education.’