Cathy was on holiday in Hong Kong, walking for hours every day, when her foot started to hurt. She hadn’t fallen or injured herself but it was so sore she went to see a doctor.

She was shocked to discover she had broken a bone in her foot. Worried about her bone strength, Cathy’s doctor sent her for a bone density test.

It turned out Cathy had osteopenia, the precursor to osteoporosis. Her doctor then advised Cathy’s four sisters have their bones checked, too. 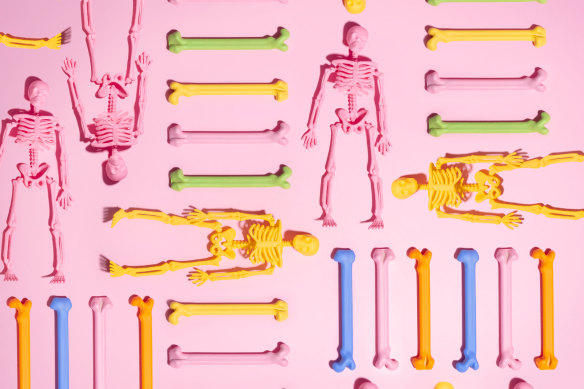 Cathy’s younger sister, Andrea, was only 38 at the time and thought herself too young to have any issues. But on Cathy’s insistence, Andrea visited her GP and also received a referral for a bone density test.

Unconcerned, Andrea popped the referral on the fridge and got on with her busy life. Two years later, she finally got around to having the scan. “I thought the doctor would come back and say, ‘Your bones are fantastic!’ I was hoping I’d have the best bones of all my sisters.”

Instead, Andrea was told she had “the bones of a 70-year-old woman”. She wasn’t prepared for that. “I burst into tears. I was just shocked.”

When Andrea’s doctor told her she had osteoporosis, Andrea was floored. “I truly believed osteoporosis was an old person’s disease.”

“I thought the doctor would come back and say, ‘Your bones are fantastic!’ I was hoping I’d have the best bones of all my sisters.”

That’s a common assumption, says Associate Professor Peter Wong, head of rheumatology at Westmead Hospital in Sydney and medical director of Healthy Bones Australia. He says it’s also common for people to assume osteoporosis is a condition that affects only women. But osteoporosis can occur in younger women, though it is less common, and can also affect men. Wong says an osteoporotic fracture will occur in about one in three women at some stage in their life, and in about one in five men.

So what is osteoporosis? In simple terms, Wong says, it’s when you have “thin bones”. Instead of hardy, thick bones, osteoporotic bones are at increased risk of fracture. You can even break a bone, as Cathy did, without noticeable trauma.

Because osteoporosis is painless, some people discover they have it only after they’ve broken a bone and gone for a scan. But having a bone mineral density test, known as a DXA scan, can diagnose the condition.

While osteoporosis is common, it’s not inevitable. Wong says the best ways to prevent it are by consuming enough calcium and doing regular exercise. He recommends aiming for 1000 milligrams of calcium a day.

“A tub of yoghurt, a serve of cheese and a glass of low-fat skim milk is a good amount of calcium,” he says.

You also need adequate sunlight exposure, which allows skin to make vitamin D, a crucial component of strong bones. Smoking can lead to weak bones, so quitting is advised.

If you have osteoporosis and have had a bone fracture, Wong says there are treatments available that can thicken bones and dramatically reduce your risk of a further break.

It’s been 17 years since Andrea was diagnosed with osteoporosis. She goes for regular scans and takes medication prescribed by an endocrinologist that fortifies her bones.

She now hopes to inspire others to talk to their doctor about whether they need to check their bones – no matter what their age.

Dr Evelyn Lewin is a qualified GP and freelance writer.