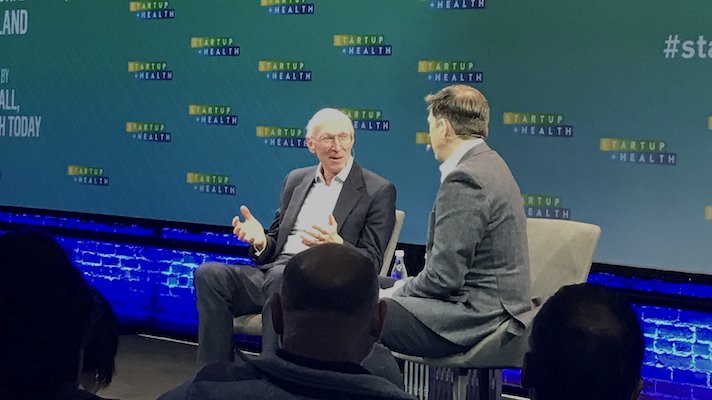 Lord Prior of Brampton, who took over last year as chair of NHS England, has big plans for the organisation he now helps lead — many of which were laid out in the 10-year plan announced last week. Lord Prior was also on hand at the JP Morgan Healthcare Conference in San Francisco, stopping by the StartUp Health Festival, where MobiHealthNews caught up with him.

Broadly, the organisation is working to better integrate different kinds of care and to move its focus from treatment to prevention. Through its 100,000 Genomes Project, which met its eponymous milestone last month, he hopes to make the UK a world leader in personalised medicine. And finally, the NHS is increasingly focused on quickly and responsibly deploying digital health services.

“We’re setting up what we call HealthTech Connect, which is kind of a portal. Any digital product that any companies want to introduce in the UK can come through HealthTech Connect straight into the NHS,” Lord Prior said on stage at StartUp Health. “We want the NHS to be sort of a testbed for new technology. And obviously it’s got to be safe, it’s got to be approved and regulated, but we want the NHS to be the most accessible healthcare system in the world for new technology.”

In a follow-up with MobiHealthNews, Lord Prior said that the particular challenge the NHS faces with regards to digital health technologies is not only to encourage a wide field of technologies in its testbed, but to ultimately incorporate the best ones as widely as possible, taking advantage of the national system.

“We want to spread best practice and we want to standardise best practice,” he said. “But standardisation can be the enemy of innovation if you’re not careful. I think we’re never going to get it quite right, but it’s trying to eliminate variation in the system but at the same time making sure the system is open to innovation. That balance is always difficult to get right, but that’s what we try to do.”

Lord Prior also defended the NHS’s rollout of Babylon’s GP at Hand app, which has received some measure of criticism for the speed and handling of its deployment.

“I think it’s in the nature of entrepreneurial business, like Babylon being an example, that you always move too fast,” he said. “And you have to be ahead of the curve and stay ahead of the curve. Otherwise you get overtaken by other people. It’s not so much too fast as it is the technology is changing much more quickly now than it’s ever done before. So it’s difficult for people to keep up with it. And sometimes the short-term disruption of a new technology can be very hard for existing people to live with. It is the world we live in.”

Lord Prior will serve a four-year term as chair of NHS England.

“I’ve been in healthcare since 2002, so I know quite a lot about healthcare and I think I can make a contribution,” he said. “The strategy that we launched yesterday is absolutely the right one and in terms of seeing that strategy implemented, I’ve got a part to play.”