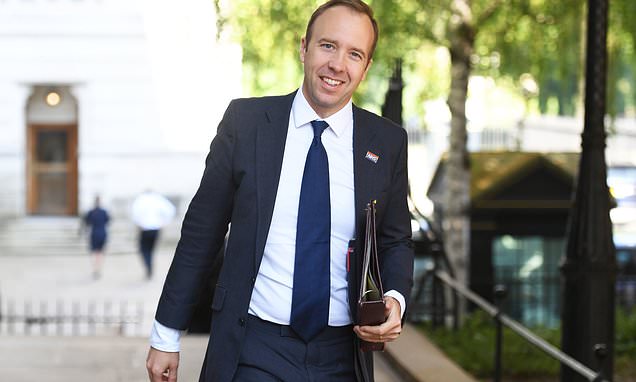 Patients with minor illnesses will be sent to a pharmacist the same day instead of their GP in a bid to relieve pressure on the NHS.

Health Secretary Matt Hancock said he wants pharmacists to play a ‘stronger role’ in healthcare and help people get over common illnesses.

Those with an earache or sore throat, for example, could be directed to their local pharmacy if they call 111, instead of going to a proper medical centre or hospital.

There, the pharmacist can advise them how to get over their illness, give them over-the-counter medicine or refer them to a doctor if they think it’s necessary.

The move comes amid huge pressures on GP practices, which are shutting down in droves, and A&E departments which regularly fail to hit waiting time targets. 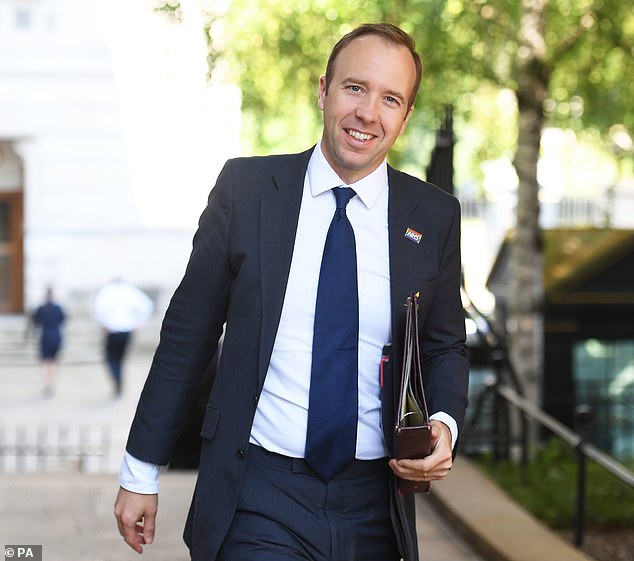 The Government’s Health Secretary, Matt Hancock, said pharmacists are ‘integral to community health’ and he wants to give them more responsibility as part of a £13bn scheme

‘Pharmacists are integral to community health and I want to move towards the French model, where they offer a wider range of services and play a stronger role in the community,’ Mr Hancock said.

‘Every day more than a million people use our community pharmacies in England.

‘We want to support our incredible pharmacists to unlock their full potential, helping them offer more health advice and support more patients as part of our long term plan for the NHS.’

Pharmacists are experts in medicine and have to spend four years studying for a masters degree as well as working under supervision for their first year in the field.

They advise doctors and nurses on which medicines to use and can help patients to manage long-term illnesses or deal with those treatable with shop-bought drugs.

Under new rules, people who phone the NHS 111 helpline may be given a same-day appointment with their pharmacist.

Only common and relatively minor symptoms would be included in the scheme, such as foot or hand pain, constipation, diarrhoea, headaches or insect bites.

WHAT SYMPTOMS WILL GET YOU SENT TO A PHARMACIST?

People phoning 111 with common or minor symptoms may now be directed to a one-on-one appointment with a pharmacist instead of a GP.

The following are included in the Department of Health and Social Care’s list of symptoms, which applies to anyone over the age of one year old:

The patient would then have a one-to-one consultation with the pharmacist in a private room so they can agree on the best course of action.

The pharmacist could send notes to a patient’s GP if they thought it was important, or refer them for an appointment if they felt it was needed.

As many as 20million GP appointments could be replaced each year under the scheme, according to the Department of Health and Social Care (DHSC).

Almost £2.6billion per year will also be invested into pharmacies under a five-year Government scheme which begins in October.

The scheme will offer extra training for pharmacists to be able to spot signs of, for example, heart disease or suicidal feelings, and to better deal with people with dementia.

They will also be urged to check diabetic patients get their feet and eyes checked regularly, to help people stop smoking or lose weight and to test intravenous drug users for hepatitis C.

Mr Hancock added: ‘Community pharmacies are a vital and trusted part of our NHS, and this five-year deal will ensure more people get support in the most appropriate setting, which in turn helps relieve pressure on the wider health service.’

The DHSC hopes the move will take some of the heat off GP practices and A&E departments, which remain under crippling pressure.

Growing numbers of old people, staff shortages and funding cuts have left NHS staff all over the country struggling to cope with demand.

And figures in January revealed 15million GP appointments went to waste last year after people booked them and didn’t turn up, costing the health service £216m.

Waits to get through the doors of the doctor’s office are growing, too, with 12.3m appointments last year taking place more than two weeks after they were booked.

Dr Richard Vautrey, chair of the British Medical Association’s GP committee said in May: ‘This data, while only providing a limited snapshot of the total work that GPs do, provides clear evidence of the rising workload pressure practices are under.

‘We are providing a million more appointments each month, yet with hundreds fewer GPs.’