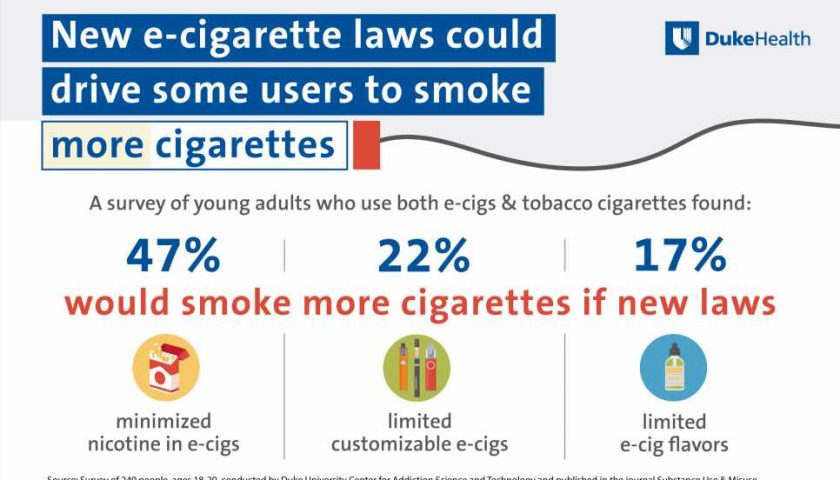 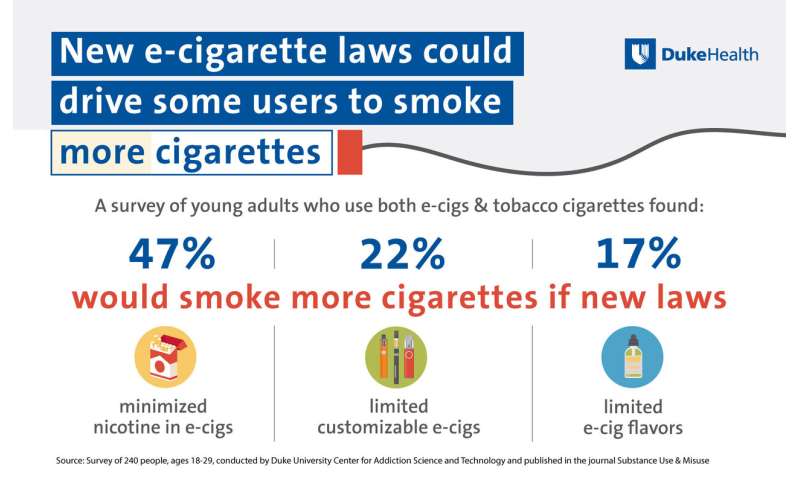 Efforts by the FDA and some cities to limit the availability and appeal of e-cigarettes to young users could drive some existing users to smoke more tobacco cigarettes to get their fix, according to new research from Duke Health.

The findings, from a survey of 240 young U.S. adults who use both e-cigarettes and traditional tobacco cigarettes, are scheduled to be published July 15 in the journal Substance Use & Misuse.

“The FDA now has regulatory authority over all tobacco products, including e-cigarettes and we know that some communities have taken action to ban flavored e-cigarette products,” said Lauren Pacek, Ph.D., the study’s lead author and an assistant professor in psychiatry and behavioral sciences at Duke.

“We wanted to take a first pass at seeing what users’ anticipated responses to new regulations might be,” Pacek said. “Our findings suggest that while some regulations, such as banning certain flavors to limit appeal to adolescents, might improve outcomes for those young users, the new regulations might have unintended consequences with other portions of the population.”

The online survey asked participants aged 18 to 29 to predict their use of two products they already used—e-cigarettes and traditional tobacco cigarettes—in response to hypothetical regulations to limit e-cigarette flavors, limit the customizability of e-cigarettes or eliminate the nicotine in e-cigarettes.

About 47 percent of respondents said if regulations eliminated the nicotine in e-cigarettes, they wouldn’t use e-cigs as much and would increase their use of traditional cigarettes.

About 22 percent said if regulations limited the customizability of devices, such as features allowing users to adjust nicotine dose or vapor temperature, they would use e-cigs less and smoke more tobacco cigarettes.

About 17 percent said if e-cigarettes were to be limited to tobacco and menthol flavors, they wouldn’t use e-cigs as much and they would smoke more tobacco cigarettes.

According to other research on e-cigarette use, about a third of people who use e-cigarettes also use other tobacco products, Pacek said. For instance, some smokers might use an e-cigarette where tobacco smoking is not allowed, such as at work or a restaurant.

The survey was small and not designed to predict the behavior of e-cigarette users across the U.S., Pacek said. However, the data suggest that when considering changes to e-cigarettes, such as limiting fruity flavors proven to appeal to youth, that regulators also consider the downstream effects of new regulations on other users.