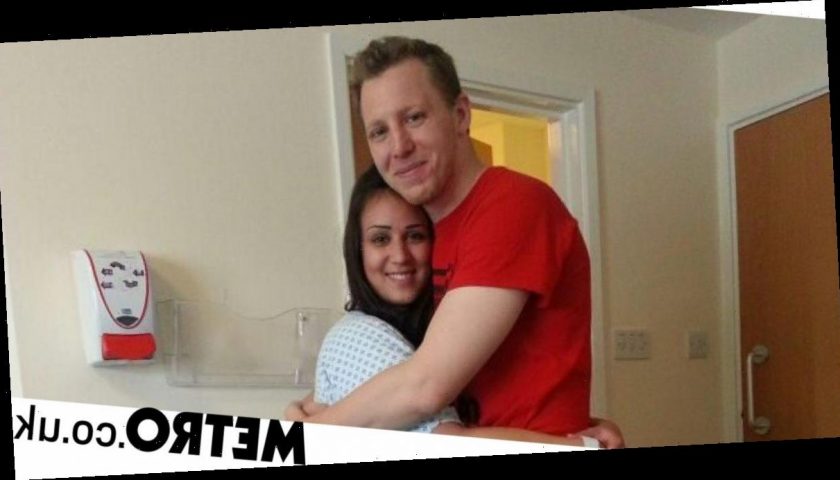 It felt like a white-hot poker in my left ovary, which sent pain creeping up my ribs, around my back and down to my toes. It hurt to walk, sit, stand, sleep, have sex, go to the loo and generally be alive.

I didn’t realise it at the time, but this pain was being caused by endometriosis, a condition that occurs when cells move elsewhere in the body, causing internal scarring and adhesions (thick fibrous bands) that stick your organs together.

The cells also break down and bleed during every period, adding to the internal damage. This meant that my periods lasted 10 days – I bled heavily with clots the size of teabags from days one to six. I had excruciating back pain and sciatica (nerve pain) so acute it made me break into a sweat, vomit and faint.

Every few months, I also had cysts on my ovaries that grew until they burst. I couldn’t wear anything with a waistband – I even had to cut the 3mm of elastic on my knickers.

To manage this unbearable physical pain, I regularly took paracetamol, ibuprofen and tramadol – a powerful opiate, prescribed by my GP.

And I had to take it; without opiates, my pain would have forced me to give up my career. I also might have lost the will to live.

When every minute is ruled by pain, there comes a point when you no longer want to be around. I never wanted to kill myself but I couldn’t cope anymore. I was also depressed and anxious – something you’re three times more likely to suffer with when you’re in chronic pain.

But even with all these pills rattling around inside me, my life was ruled by pain.

While friends went to festivals, had the best sex of their lives and travelled, I climbed into bed at 8pm with a heat-pad, downing my fourth and final round of pills for the day.

I often felt sad and isolated as I drifted into my opiate fog.

I was finally diagnosed with endometriosis at 26, more than 15 years after it had started mangling my insides, silently robbing me of my fertility and ruining my life.

After my diagnosis in November 2011, I had surgery to laser away as much of the disease as visible and free my left ovary from the adhesions that were banding across and around it, trapping, twisting and sticking it between my womb, my back, and sciatic nerves.

Although my GP had done me a kindness by putting opiates on repeat prescription, he had failed to warn me about how addictive they were. Little did I know that it takes the body as little as 72 hours to become dependent.

I took my opiates three or four times a day, and I could feel the moment they hit my system, as a sudden warmth spiked through my veins. At first it took 20 minutes, then – as my tolerance grew – 90 minutes.

Eight weeks after my ablation, my pain levels dropped dramatically and I stopped the tramadol because I didn’t need it.

Within 24 hours, I’d lost my voice, developed symptoms of flu, body-sweats, anxiety so intense my limbs twitched, had insomnia, diarrhoea and nausea. It tailed off after two months.

But it would be years – and four more episodes just like this one – before I realised that I had unwittingly gone through opiate withdrawal.

Opiates are contradictory drugs: to millions like me who suffer from chronic pain, they are a lifeline – with UK GPs handing out 2,700 prescriptions per hour.

But they’re also a ‘gateway’ drug, making those who take it vulnerable to dependency and abuse, as patients quickly need larger doses and harder drugs to achieve the same relief. Opiates also come with a ‘high,’ which in itself is addictive.

Had I known that what I was going through was withdrawal, I would have tapered down my high doses slowly over a number of months, maybe even a year.

I also wouldn’t have tolerated the horrific physical and emotional symptoms of withdrawal, which I thought were the flu. I would have taken paracetamol for body aches and fever, over-the-counter drugs for diarrhoea and nausea, as well as herbal or prescription medication for anxiety, something I’d been reluctant to do because I hadn’t wanted to take medicine for something I thought was a minor illness.

I only realised I was suffering from opiate withdrawal when I Googled my symptoms one night, as I felt so ill I thought I was dying.

Once I understood what was wrong with me, I knew I would have benefited from expert support in a rehab clinic, but I was afraid of being wrongly labelled as a prescription drug abuser and worried that I would be refused opiates when my endo flared up again and I needed adequate pain relief.

I also didn’t seek or crave the high, take opiates for pleasure, or more than the dose prescribed.

Without a cure for endometriosis, and no real advancements in treatment in 30 years, the disease returning is a distinct probability.

After my diagnosis, I ended up having four surgeries in two years to repeatedly laser away the endometriosis and free my trapped ovary from new adhesions. Each recovery took longer, requiring opiates to tolerate going back to work before I was physically ready.

Surgeons told me I’d need just two weeks off, but it was usually six weeks or more before I could sit upright for more than 30 mins.

Eventually, I had my left ovary removed and the endometriosis cut out in an ‘excision’ surgery in April 2019 and my pain improved tenfold.

Although I am currently managing my endometriosis, I now have anxiety that won’t shift and take anti-anxiety medication daily. When you’ve lived with chronic pain for years, the underlying emotional stress that comes with it becomes quite ingrained.

A GP friend tells me the effect of the opiate withdrawal lingers long after your body recovers from dependency, because your brain remains in chemical withdrawal for many months.

I have no doubt that I would have avoided opiate dependency if my endometriosis had been diagnosed in my teens. It might have saved my fertility and spared me the IVF I needed to have my daughter. Perhaps it would also have saved me the suffering from persistent anxiety.

Now, I take very high-dose progesterone (a synthetic hormone) and haven’t had a period for years.

I tolerate the unpleasant side-effects of weight gain, increased appetite, night-sweats and excessive body hair growth to stop the endometriosis returning. If I miss a dose, my lower back and abdomen ache, reminding me the wolf is still in my house.

This is my endometriosis life, living on a knife-edge between disease, pain and drug-dependency, but if I hadn’t been given access to opiates for all the years I needed pain relief, I might not have survived the pain.

In spite of the dependency risks, I am still alive and grateful for it.